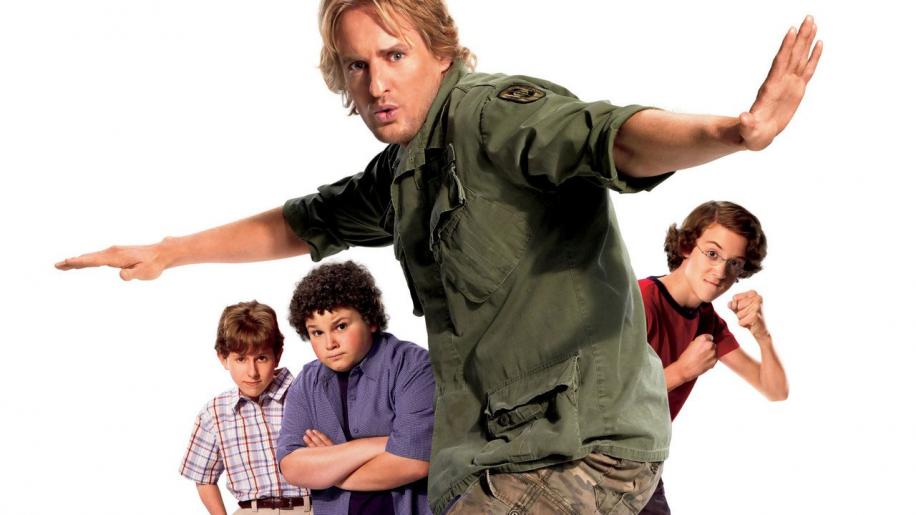 Given a very brief theatrical release during Owen Wilsons very well publicised personal problems, those of you reading this review may not have even realised that this wasn't a straight to disc release. I'll not touch on Wilsons problems again other than to say that it appears that he is well and truly on the mend with two films up and coming, both at the filming stage (One of them being Night At The Museum 2 - which I'm personally looking forward too very much). Rightly or wrongly, the studio appeared to have pulled the film from release at that time so it was seen by very few people.

Wilson plays Drillbit Taylor, an ex US soldier who has fallen on hard times and is living rough on the streets of Santa Monica. He plods from place to place with his band of hobos, generally making nuisances of themselves trying to scrounge from the local population...and are always on the lookout for a way to make a quick buck.

At the same time Drillbit is scheming to make money, it's the start of the new school year and young Ryan (Troy Gentile), Emmet (David Dorfman) and Wade (Nate Hartley) are about to embark on their high school careers. Things get off to a bad start when Ryan and wade meet at the bus stop wearing the same dorkey shirt - a right case for a school bully's target if ever there was one...

And sure enough, school bully Filkins (played by Alex Frost) gets the pair firmly in his sights on day one. The pair become a trio when they are joined at the school by Emmet -who kind of looks at the two as his mentors, a point proved when he arrives at school on day two wearing the same shirt that the pair were wearing on the first day!.
One thing leads to another and they soon place an ad in a local paper looking for a bodyguard. The answered by all manner of Neanderthals - but they are all way out of the boys price range.

Still looking for his quick buck, Drillbit Taylor smells the colour of the easy money and applies for the job. He's interviewed by the boys - and as he's willing to take whatever they can afford, gets the job (on the back of one or two “lies” on his CV).

Drillbit decides that the best way for the boys to defend themselves is to find some common ground between them and the bullies - and Ryan decides to “Rap Off” against Filkins with disastrous consequences. Things go from bad to worse for the boys and Drillbit poses as a stand in teacher in their school to try and keep on the case. He meets their attractive teacher (played by Leslie Mann) and they hit it off big time. Taylor goes from being Drillbit too Dr. Illbit and ends up teaching nearly every subject in the school to try and teach the bullies a lesson. Eventually, the truth comes out after Taylor had hatched a plan to rob Wades house with his hobo buddies - a plan that refused to back out off once Drillbit becomes close to the boys...


It's all out predictable stuff throughout the entire run time of the film - but its likeable predictable stuff. The scenes where Drillbit tries to teach the young lads some fighting skills are laugh out loud funny and it's here it becomes obvious that Taylor is a phoney. He doesn't really seem to know what he's talking about when it comes to martial arts and winces in pain as he takes one between the legs after a lesson goes completely wrong.

Owen Wilson steals every scene he's in - but it's not the actor - it's the character. Drillbit is such a likeable guy, you just want him to succeed in life. He's made a few mistakes in his life and seems to be paying the price - but who hasn't made mistakes? He's willing to accept the fact that he's a nobody' going nowhere and Wilson gets the best out of a very likeable character.


The kids in the film are typical dorkey American sub teens going through the changes in life. Particularly funny is young Troy Gentile, who plays the rather portly Ryan. And I'm ashamed to say, it's because of his portliness that I found him rather amusing. Like Oliver Hardy, he seems to find the simplest of physical tasks difficult and it all adds up to the comedy elements.

Funniest lines though go to Billy. He's not one of the bullied but is a classmate of the three that are. He's the kid that asks the teacher questions that everybody else is scared too - and it's these questions that are rib tickling funny. Watch out for the questions after the class have had a class on STD's...

As a movie, Drillbit Taylor works because the cast seem to work so well together. The pace of the film is about right. The feature presented on this Blu-ray disc is the unrated directors cut. I confess to never having seen the uncut version - but this one will do nicely thank you.