There's a killer on the loose, preying on women 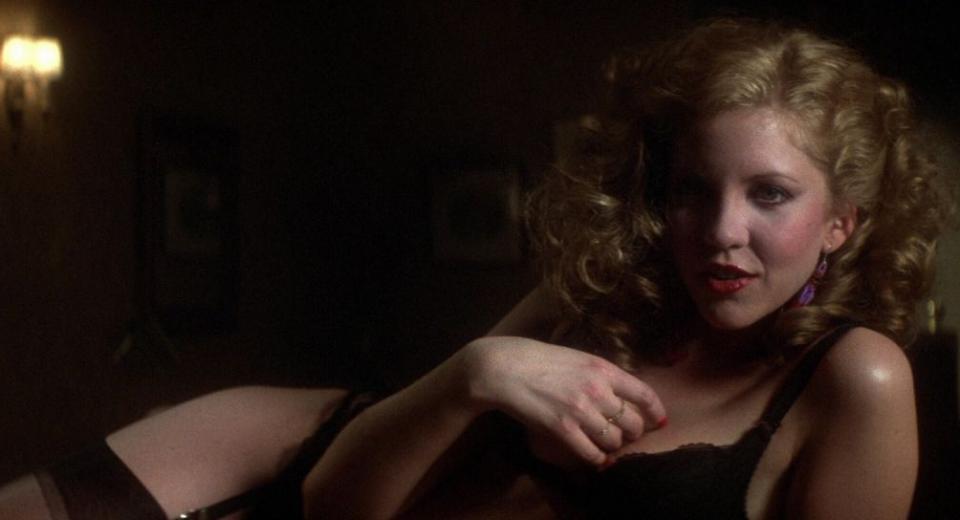 Hitting UK shores courtesy of the ever-reliable Arrow, Dressed to Kill’s Region B-locked Blu-ray boasts a strong 1080p/AVC High Definition video presentation in the movie’s original theatrical aspect ratio of 2.4:1 widescreen. Undoubtedly the film is softer than most modern features, but this is obviously a product of its 80s style, as borne out by the style of many of De Palma’s other similar-period productions (c.f. Blow Out), and, as such, you can have faith in the fact that this is likely the best shape we will ever find this film in. Certainly there doesn’t appear to be any unwieldy DNR over-application, or overt edge enhancement. Detail is quite variable – some of the shots are still rather impressive, making the most of De Palma’s distinctive stylistic choices and highlighting the very specific and particular framing he uses; the prevalent dioptic shots are the most obvious examples, with two people often in focus and a blurry patch between them. These still look very good indeed. The colour scheme is generally well rendered as well, and black levels are quite strong, although noise levels aren’t wholly stable. All in all this is a solid, although obviously not exceptional, video presentation of the material, and probably the best we ever have or will see from this film.

The audio was transferred from an original 35mm mono mag.

Arrow offer up two audio flavours, defaulting to the English LPCM 2.0 track over the artificially enhanced DTS-HD Master Audio 5.1 mix. Usually I favour the 2-channel variations as they hold truer to the material and perhaps even the intentions of the filmmakers, but the 5.1 offering is arguably the superior track in this case, rendering the material in a very pleasing fashion that often creates a decent atmosphere within which the narrative can build in tension. Dialogue is clear and coherent throughout, dominating the frontal array whichever option you choose, and it’s probably the score that most benefits the six-speaker option – for good or for bad – penetrating and rising above most every sequence. Two decent offerings, the choice is yours, but, either way, this is a solid presentation of the audio.

Arrow once again don’t disappoint on the extras front, with a release packed full to the brim, including several newly-recorded, exclusives.

The Making of a Thriller is a hefty 44-minute behind-the-scenes offering that takes a look into the background of the production, with director Brian De Palma, actors Angie Dickinson and Keith Gordon and producer George Litto discussing their work together, the style and techniques implemented, the locations chosen and the intentions and impact of the film.

Lessons in Filmmaking is a half-hour discussion with actor Keith Gordon – now a filmmaker in his own right – who talks about how Dressed to Kill changed his career and reflects upon working on the production.

Dressed in White spends a further half hour with Angie Dickinson, talking about the importance of her work on the movie – one of her favourite roles.

Dressed in Purple is a 23-minute chat with Nancy Allen, who talks about both the film, and also her relationship – both personal and professional – with Brian De Palma.

Symphony of Fear rounds out the interviews with producer George Litto spending 18 minutes talking about his work with Brian De Palma, including their work together on this film.

Slashing Dressed to Kill is a 10 minute Featurette which delves into the cuts required to satisfy the Studios and prevent the film from being stuck with the dreaded X rating.

A Film Comparison is a further 6 minutes spent specifically comparing the Unrated, R-Rated and TV versions of the movie, highlighting and comparing the cuts made.

The disc is rounded off by a Gallery of production stills, a Trailer and a Booklet with some very interesting articles, including a reflection upon the Giallo influences in Dressed to Kill and a look at the poster design.

Aside from being a tribute to Hitchcock, Brian De Palma’s 1980 psycho-sexual-thriller Dressed to Kill was a prime example of a truly skilled and talented – and somewhat daring – director working his way up to his A-game classics. All the evidence is here on show: the expert style with what would soon become his trademark long, tracking POV shots; split-screen techniques; and frequent dioptic usage. And, but for a jarringly over-melodramatic operatic score, and a couple of less-than-convincing performances, the feature is otherwise strong and compelling – Michael Caine and Angie Dickinson on great form; the narrative pointers all in place to twist and turn you through an atypical, against-convention story; and the director honing his distinctive style.

On Region B-locked UK Blu-ray Arrow brings yet another one of De Palma’s early classics to Blu-ray, complete with very good video and audio as well as a comprehensive selection of excellent – and even exclusive – extra features. Fans should lap it up immediately; newcomers who like some of De Palma’s other features should definitely check it out.