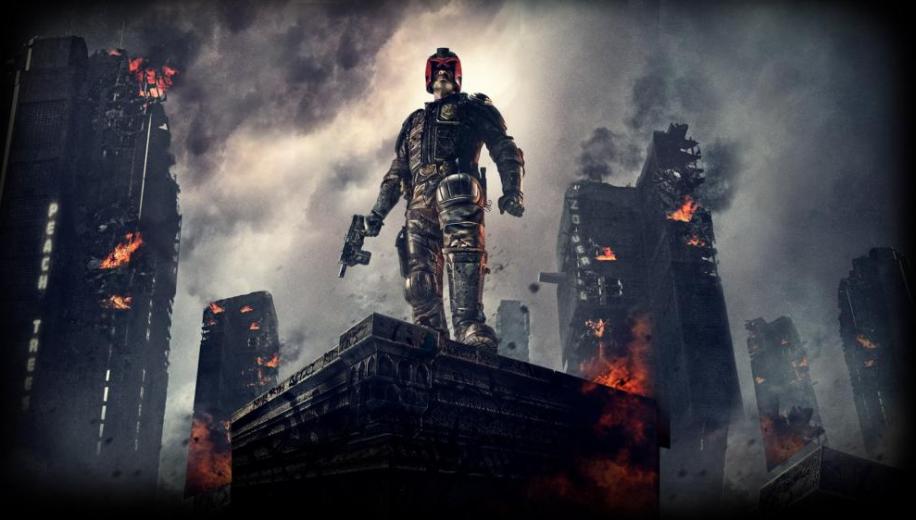 Dredd, despite its commercial disregard, is a tremendous actioner and the definitive portrayal of the legendary comic book character.

There are a number of reasons why Dredd didn't make it at the box office - including, despite being superbly designed for the format, the decision to release it almost exclusively in 3D - but none of them speak towards the quality, intensity or near-perfection of the sci-fi actioner itself. Based on the character who was previously adapted for the screen in a big budget Stallone romp, the filmmakers here go out of their way not to make the same mistakes this time round, staying true to the source material - for starters, not taking off Judge Dredd's helmet - and maintaining the level of unrestrained violence required to properly reflect it.
For many, Karl Urban's Dredd is the walking, talking personification of the character, accompanied by a equally well-chosen Olivia Thirlby as psychic rookie Judge Anderson, and facing off against Lena Headey's vicious crimelord 'Ma Ma'. Set in a single Mega City One tower block, the plot and action are often uncannily reminiscent of the same year's The Raid, but can still be enjoyed equally as different experiences, with this remaining a relentless, punishing, and brutal outing perfectly designed for fans of the character, but also efficient enough as a thrilling sci-fi actioner to entice newcomers. The only crime is that there is still no sequel.

Shot digitally, Dredd is unfortunately technically constrained by its 2K Digital Intermediate, although the results are largely very pleasing. It was a problematic release on Blu-ray, both in the UK and US, with its single disc sporting a 2D/3D option that left the former often regarded as washed-out, prone to defects and flat and uninspiring. Conversely, its 3D option was vastly superior. Many fans turned to the French Blu-ray release, which cleaned things up and improved the image considerably. For those who have hitherto been limited by their UK or US 2D/3D Blu-ray disc, the Ultra HD Blu-ray is a staggering step-up, not only improving on detail and textures, but also balancing out contrast issues, refining black levels and popping with vibrant colours. Even those with the French Blu-ray should note an improvement, albeit a more subtle one, as the French image wasn't as markedly flawed in the first place.


Although not a perfect release, this powerful use of the new format's technology still puts it in demo territory

Of course Dredd was originally designed to be seen in 3D, with key sequences (in particular the Slo-Mo drug-induced shots) specifically tailored to make the most of the format. Most fans would agree that the 2D versions released thus far have been inferior to the 3D experience, but that doesn't put Ultra HD adopters at a disadvantage thanks to the presentation's use of the High Dynamic Range (HDR) and Wide Colour Gamut (WCG).

Ultra HD uses these tools to stand apart from its HD sibling, going way beyond mere pixel resolution, and enhancing the very look and vibrancy of the piece. With Dredd, however, they are taken to another level, not only improving the black levels and colour depth, but actually shaping the traditionally 3D-designed sequences with a staggering amount of vibrant colour and sheer pop. It's such impressive work that some might actually find that they prefer the glasses-less, brighter, 2D image on the Ultra HD Blu-ray release to any previous 3D version they've experienced, or, at the very least, find that it makes for a similarly striking experience with HDR and WCG effectively making up for the lack of 3D in the key scenes. Although it's still not a perfect release, this kind of powerful use of the new format's technology arguably puts it in potential demo territory.

Dredd's accompanying audio needs no such qualification when receiving a demo - or even veritably reference - label. It was always a perfectly-designed aural experience, with the enhanced Dolby Atmos track running off a similarly impressive Dolby TrueHD 7.1 core which will shake your living room underfoot whilst accurately placing high explosive rounds all around you.

Cas Harlow reviewed the audio using a standard 5.1-channel setup – Dialogue, despite being arguably the least important element in the soundscape, gets clearly and coherent dissemination across the frontal array - even Dredd's gruff intonation. The score is a relentless, percussive animal which rumbles beneath you and thunders around, drumming you into submission, sweeping you up with exquisite use of the soundstage, whilst seldom letting go of the LFE reins. It's the effects that are the most impressive element, however, giving life to every single one of Dredd's lawgiver modes - and to the very sound of the gun when it changes selection - whilst the environment, both in the film and in your living room, is decimated by a succession of different munitions types. It's excellent work, and near-perfect audio.

Steve Withers reviewed the audio using a 7.2.4-channel Dolby Atmos setup – The Ultra HD Blu-ray release of Dredd boasts a brand new Dolby Atmos mix that adds an entirely new dimension to the film's soundscape thanks to the use of object-based audio. The Atmos track retains all the benefits of the Dolby TrueHD 7.1 core track such as clearly disseminated vocals, a strong percussive soundtrack and thunderous bass but adds greater precision to the steering of effects and a more immersive experience. For example not only does the gunfire echo all around the block's corridors but when 'Ma Ma' is addressing the residents over the block's PA her voice emanates from multiple directions including overhead. When the block is put into lock-down the sounds of the blast doors and shutters coming down start from above you and work their way down. The block's central atrium is another opportunity for an impressive demonstration of the use of overhead channels but the entire soundtrack benefits from the greater freedom that object-based audio affords the sound designers and the results are simply epic.

Lionsgate continue their admirable trend of porting over all of the extras onto the UHD Blu-ray disc, which is let down here only slightly by the fact that the original Blu-ray's extras weren't all that impressive in the first place. For a release as popular as this (which means for some fans, owning potentially two different Blu-ray copies already even before picking up this Ultra HD Blu-ray), and certainly as fan-revered, it might have been nice to have a few new inclusions here.


The original extras weren't all that impressive in the first place

Nevertheless the slew of short Featurette-based supplemental material leaves the disc far from bare bones, with a quarter-hour look behind the origins of Dredd, some shorter additional pieces on the costumes, weapons and location, and a longer look at the stunning visual effects, again with an accompanying shorter piece on the 3D aspect (ironically rubbing salt in the wounds of those who can no longer experience it). The disc is rounded off by a motion comic prequel clip and the trailer. The only crime is that there is no sequel

Five years later, with still no sequel on the horizon, fans of Dredd can finally breathe a sigh of relief at the news of a Dredd TV show which will hopefully maintain the style and ethos of this faithful adaptation, whilst similarly utilising budget-friendly locales and smaller-scale stories to keep the costs down until it achieves the success it deserves. The only news fans are still waiting to hear is whether star Karl Urban - who, despite his excellent McCoy, and despite never getting to see his face here, will probably always be regarded as the definitive Dredd - will sign up for it.

In the meantime, having picked up the hit-and-miss 2D/3D UK Blu-ray, and possibly adopted the superior French Blu-ray, and maybe even stumped up for one of many excellent Steelbook variations, fans will find it hard not to pick up the excellent Ultra HD Blu-ray incarnation, which makes stunning use of HDR and WCG to bring the previously 3D-tailored sequences to life as has never before been accomplished in 2D. If that wasn't enough it also boasts an epic soundtrack that has been remixed in Dolby Atmos, providing another good reason to pick up this UHD release – highly recommended.