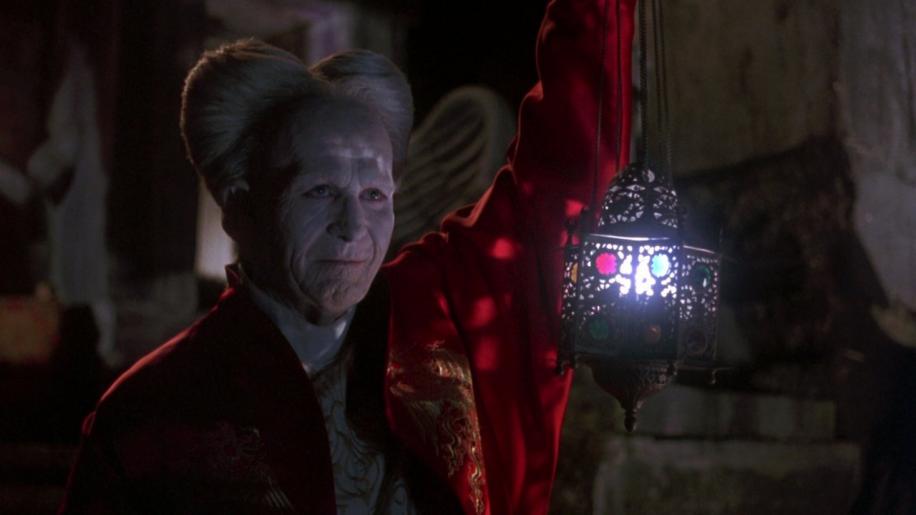 Master Director Francis Ford Coppola's own production company, Zoetrope, was on the brink of bankruptcy by the early Nineties. With such titles as Apocalypse Now and the Godfather Trilogy in his accolade, it seems surprising that things had become this bad, but it was largely because his productions often went massively over-budget. His movies, though classics, just did not pay for themselves (at least not at the time), and the more cheesy productions he did were not making any money at all. So when he was approached with the script for Dracula, originally destined to be a TV adaptation, it was a dream come true. For not only would he have the opportunity to make a movie about a subject which he had a great deal of interest in, but he might also be able to save his dying production company. Hence, the flawed but highly unusual 1992 adaptation of Bram Stoker's legendary Dracula novel came into existence.

It's 1462 and the fall of Constantinople. The Moslem Turks are threatening to destroy Christendom in Europe. Vlad 'The Impaler' Tepes, of the order of the Draculs, is a ferocious warrior battling relentlessly against the Turks. But, despite his victory, he tragically loses his one true love after his enemies falsely inform her of his death. By committing suicide, the priests inform Vlad that her soul is damned forever and, in a fit of rage, he denounces God and damns himself to eternal life as Dracula.

We find ourselves moving to 1897, a time when technology is affecting society a great deal, and a time when the Count has settled himself quite contentedly into his Castle Estate in Transylvania. In showing an interest in buying up real estate across England, he garners the attention of several major brokers who send an agent over to Transylvania to close the deal. Unfortunately, the young Jonathan Harker is not the first Agent dispatched, the last one having been driven insane by the Count, and when Dracula discovers that Harker's bride, Mina, appears to be the living embodiment of his own long-lost love, he voyages to England to claim her.

Bram Stoker's Dracula, in its written form, was basically a disjointed collection of diary entries which - taken as a whole - told the story of what Dracula was up to across that period. Coppola, a great fan of the work, has taken this style and followed it closely, but integrated into it the vital backbone of a tragic love story, the story of a faithful and God-fearing warrior who damns himself for his one true love, and who is desperate to find and be with her once again. Considering that this is ostensibly a horror story, and has often been treated as such in other interpretations, the re-telling here is much more grey and dubious. Dracula is resolutely evil, but in telling his (supposedly historically faithful) back-story, audiences are allowed to empathise with him more, and at least understand where he was coming from.

The movie also gives us my own personal favourite interpretation of Dracula (as with Jack Nicholson's Joker), as embodied by the master method actor Gary Oldman. Oldman has played some very unusual roles over the last few decades, always bringing something unique to the parts, but arguably the pinnacle of his career was here as the enigmatic, eccentric and powerful Dracula. At his best when hamming it up as Dracula's reclusive Count, he is perfectly cast as the tragic lead.

Unfortunately I'm not entirely sure whether Coppola hits the mark with any other aspect of his casting, except perhaps in some of his more minor choices. Firstly the obvious - Keanu Reeves. Damn, I had forgotten that he used to be this bad. What worked in Point Break as 'acting' comes across abysmally here in his wooden interpretation of the hero Jonathan Harker, complete with cringe-worthy posh Brit accent. Coppola openly admits what a terrible casting mistake he made, and states that he foolishly bowed to the Studios wanting a popular male lead to attract female audiences, but the effect is quite damaging on the production as a whole.

Winona Ryder does not particularly help, although thankfully her character of Mina does not really require her to do a great deal more other than to act feeble. Anthony Hopkins is more successful in the role of the vampire-hunting Doctor Van Helsing (a far superior interpretation than Hugh Jackman's in the recent comic-book-styled adaptation of the same name.), although it is clear that his on-set disagreements with Coppola often led to a confusion about the character that made the end result not quite as powerful and significant as it perhaps should have been. Still, Hopkins is never less than engaging. We also get a nice frivolous role for a young Sadie Frost, a debut movie role for the beautiful Monica Bellucci, cameos for Bill Campbell and Richard E. Grant and a memorable part for Tom Waits as the original Agent sent to broker the land deal, now locked within an insane asylum where he feeds on insects and preaches his master's coming. Still, this is all really Oldman's baby, and it is his central performance that grounds the movie and makes it superior to many of the other Dracula films.

It's a classically-stylised production as well, with Coppola constantly paying tribute to the original interpretations in the way he does his filming and effects (from the circular fading in and out to the use of shooting backwards), as well as staying faithful to the popular source novel. After his disappointing concluding Godfather chapter in 1990, and with his company facing bankruptcy, his vision of Bram Stoker's Dracula was successful enough to put him back in play, but to this day remains something of a flawed production, which earns almost as many rightful criticisms as it garners just praise. Overall, the movie succeeds in being one of the best vampiric interpretations out there, and a classic love story at that, it is just a shame that it is often marred by some poor choices and confused performances. Still, once you've seen Oldman's Count 'Vlad The Impaler' Dracula, you're unlikely to ever forget him. Recommended.