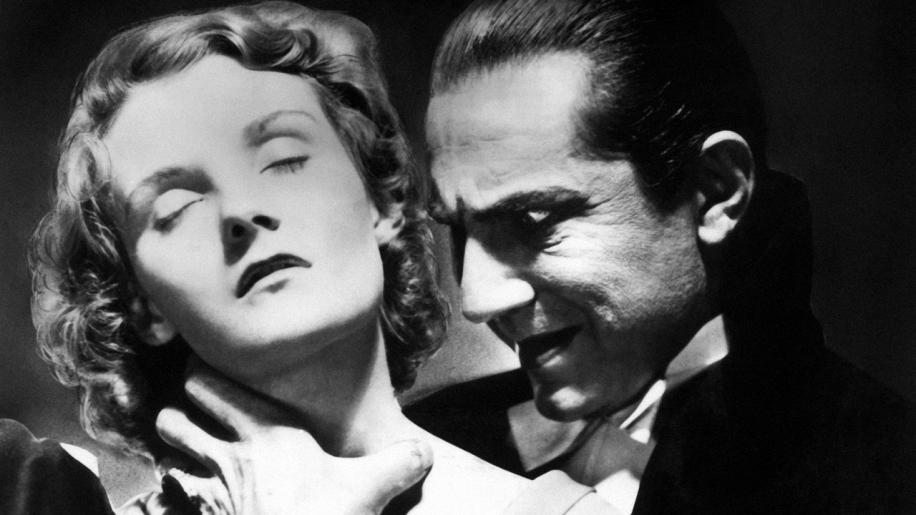 As with the Frankenstein 75th Anniversary Edition, this new Dracula has also seen more restoration work, although don't get your hopes up too high. Browning's film was always the one of this illustrious pair to have suffered the most with age, and no amount of dust cleaning can alter that fact. Contrast clouding blights many scenes, with blacks throbbing through various shades of grey and the lighter portions of the image fuzzing over with hazy muck every so often. Actual damage appears in the form of myriad flickers and judders, hairs, nicks and scratches that stipple the picture almost constantly. But, ironically, this is exactly how it should be. Part of the film's atmosphere is dependent upon this aged, diseased quality, and Bela Lugosi shining radiantly out of a grain-free image wouldn't be half as effective as the mildewed, web-like gauze he seems to generate around himself. Having said that though, there are some shots that virtually disappear beneath the swirl of grain and speckles, and the shot of Dracula's castle perched on the mountain as Renfield draws near just looks appalling. A degree of re-cropping has taken place too, with a sliver shaved from the edges in an attempt to centralise some of Karl Freund's more prosaic framing.

But the good news is that, just like Frankenstein, this added grain actually allows for a greater amount of detail in the image, the softer portions of the picture having been scraped away to reveal more depth, sharper edges and a finer control of definition. For instance, the scene in which we first meet Dracula down in his crypt now shows water clearly trickling down the black stone wall in the foreground - something that was always masked in earlier versions. There is also more detail exhibited in the background of Dracula's rooms in his castle and, later on, in the dilapidated Carfax Abbey.

The Spanish version is actually a much cleaner looking print - but then it always was sharper and more modern in appearance. The contrast level is very good, maintaining the balance between the shadows and the light with consistency and only a fraction of the flickering or fading. Grain is still evident and there is some print damage but, overall, the image is fresher, brighter and much less fragile than Browning's version. Detail, once again, is very decent and the image seems much steadier and more reliable than the far-jerkier American print. In fact, the film looks more on a par with the stronger, more robust films of the forties. That said though, there is a sequence that was once presumed lost and was subsequently found by David J. Skal and reinstated that is in pretty bad shape and sticks out like a sore thumb. However this scene doesn't last long and poses only a very slight detriment to the look of film as a whole.

Being pragmatic, if you own the previous Monster Legacy edition and don't possess a large TV screen, it is possible that you won't really notice any appreciable difference. Lugosi's film still looks old and worn ... and those contrast fades and washes still make their presence keenly felt. Well, the optional Philip Glass soundtrack that has been carried over from the previous release, is strong and dominant, supplying a very forceful presence on the disc. Always clear and strident, every note is strikingly reproduced - but, the thing is, it is just too overbearing for the film. The dynamics of the track are aggressive to the point where the voices and effects are sort of drowned-out beneath it - which, obviously, isn't good. However, I like the scoring of the sequence when Van Helsing and Dracula confront one another in the parlour room, which manages to add some excitement and suspense. Incidentally, the new score is here presented in stereo, whilst the previous disc, from the Monster Legacy set, was in DD 5.1. This alteration doesn't make much of a difference to the overall sound design, though. The original 2-channel mono track is thankfully included, as well, and this makes for a much more evenly-balanced listening experience. Yes, it is scratchy and has plentiful hiss and crackle floating about, but this the track that we were meant to hear and, with a lot of consideration for the age of the film, this is still the best track to listen to. There are occasions when voices seem muffled and words are drowned - incidents that weren't so bad on the prior release - but to compensate for this some effects and screams that had been lost last time around have now been restored - Dracula's last gasps for example.

The Spanish Version comes over well, with sharp clear dialogue and effects, although I don't know if this is just something to do with the sound of the Spanish voices which, being foreign, seem to sound louder and more akin to having been barked out by the speakers. The musical score, all sourced as in Browning's film, hardly packs an emotional sweep, but still delivers a fine reproduction, all the same. Disc One carries Lugosi's film and two Commentary Tracks plus the great little documentaries Lugosi: The Dark Prince (36 mins) and The Road To Dracula (35 mins).

The chat with noted Dracula afficianado David J. Skal is fast and revealing. He has a habit of quoting the screenplay and passages from Stoker's original fiction, but the depth of background detail he supplies is, nevertheless, rewarding. He is also prone to making grandiose statements regarding the magic behind what is clearly his favourite topic. Steve Haberman (Dracula historian and screenwriter of the Mel Brooks spoof Dracula: Dead And Loving It) also has a lot to say about a subject that is obviously very passionate about. He supplies a lot more in the way of studio background and cast and crew career histories. Both speakers are keen to point out the differences between the Lugosi version and the Spanish version, though I have to disagree with some of their opinions. For instance, both seem to like the fact that Browning downplays the actual supernatural elements of the story and favour this approach over that of George Melford's more audacious depiction, and are content to believe that Karl Freund's camerawork and lighting (which I admit is a strong point) is much better than that showcased in the sister production. Personally, I find the look and feel of Melford's film more chilling and enjoy some of the atmospheric effects, like the billowing mist emanating from Dracula's coffin when he arises. Both, however, are willing to concede that Browning's version commits a gaff when Dracula appears as the coachman at the Borgo Pass - with his entire face unmasked it makes it quite ludicrous that Renfield doesn't recognise him later on at the castle.

Lugosi: The Dark Prince has essentially the same line-up of contributors that graced the similar feature on Boris Karloff for the Frankenstein disc. We have incisive, enthusiastic and quite convincing praise from the likes of Sir Christopher Frayling, Ramsey Campbell, Joe Dante, Kim Newman, Darryl Jones and Steve Haberman amongst others. Lugosi biographer Greg Mank gets his chimpanzees and orang-utans mixed up and Hammer's own Jimmy Sangster even crops up for a remark or two about the influence the Hungarian had on the subsequent genre. There is some great sniping at the actor's most famous professional blunder - that of turning down the role of Frankenstein's Monster - and the manner in which he attempted to backtrack over it by claiming he had stepped aside to let Karloff have the part. And the on-going rivalry between the two horror icons is discussed with many enlivening clips from their celebrated team-ups The Black Cat, The Invisible Ray, The Raven and The Body Snatcher. It is actually surprising just how good looking Lugosi was when you see him in some of his earlier casting stills and publicity portraits and the whole feature paints a very warm and respectful picture of an actor who was blessed and cursed by the role that made his name. Quite talented, although forever dumped into sub-Dracula rehashes, it seems almost criminal that his career suffered more downs than ups in the wake of his classic Hollywood debut. Son Of Frankenstein, in which he essayed the broken-necked Ygor using Karloff's fur-skin-clad Monster to off the men who condemned him to execution, was a smart return to form and actually instigated another influential horror boom after the initial ghoulish explosion in the thirties, however this doc then sadly charts the subsequent nadir of movies that seem to come his way afterwards ... culminating, of course, with the likes of Plan 9 From Outer Space. A great little feature that makes me, for one, see Bela Lugosi in a different, and much more favourable, light.

The Road To Dracula is another fine documentary. Hosted by Carla Laemmle, the daughter of legendary Universal head and film producer Carl Laemmle, this provides a fairly comprehensive overview of the background to Stoker's writing of the novel, the various stage incarnations, the copyright issues with the unauthorised first film adaptations - Dracula's Death (now long lost, I'm afraid) and Murnau's fabulous Nosferatu - and features great contributions from the likes of Clive Barker, David J. Skal, numerous historians and archivists and even Bela Lugosi's own son, also called Bela Lugosi - although he bears more resemblance to Patrick Stewart than he does to his dad. Makeup-whizz Rick Baker waxes lyrical over the minimalist transformation that Lugosi underwent and ponders on how The Man Of A Thousand Faces, Lon Chaney Snr, would have approached the role, had he lived to assume it. We are also treated to a little look at the last surviving cape that Lugosi wore in the movie and even a brief five-second snippet from Edward Van Sloan's screentest.

Taken together, these two documentaries provide excellent insight into the movie, the man and the myth.

There is also a Monster Tracks pop-up trivia feature that you can have running throughout the film, offering tit-bits and factoids about the production.

Disc Two has the Spanish version of the film, along with its loving introduction from actress Lupita Tovar, and the same Universal Horror documentary that graced the Frankenstein 75th Anniversary Edition. This is an excellent feature on the history of the studio, focussing on their Golden Era. For more information on this please refer back to the review for Frankenstein.

And finally, alongside the trailer, we also have a great selection of images and posters for the film. Despite my misgivings about the film and some of Tod Browning's choices, Dracula is still one of those mythical movies that has earned itself a place in history as a culturally significant and fascinatingly iconic genre benchmark. There are oodles of style in Lugosi's performance and some wonderful set design to recommend it, but the technical supremacy of the Spanish version is clear to see. It is such a shame that Lugosi wasn't the Dracula in that one, as then we would have a truly classic adaptation combining visual and directorial style with his archetypal portrayal.

The picture quality has been cleaned up a little bit more, but the sound is a mixed-bag - more effects and screams restored, but with an increase in background hiss. The only extras that we gain are the new commentary from Steve Haberman and the Universal Horror documentary that graced the R2 Monster Legacy boxset. But, for fans, this release, along with the much superior Frankenstein Anniversary Edition, are pretty much essential additions to their collection. And before anyone starts harping on about the inevitable HD and/or Blue Ray editions - unless the discs have more features packed onto them, they are hardly going to improve much upon these, AV-wise. There's only so much high-definition can do with films of this vintage - and, to be honest, they may look even worse.