Dr. Strangelove or: How I Learned to Stop Worrying and Love the Bomb Movie Review 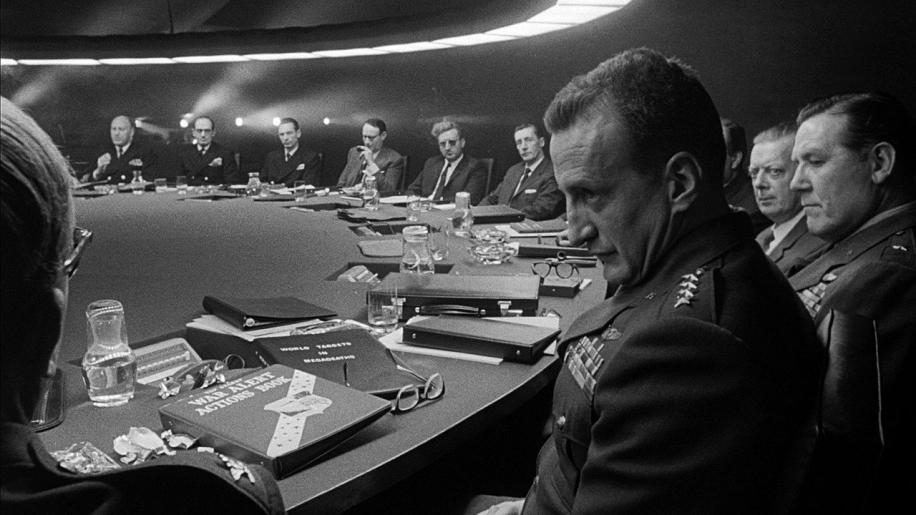 Dr. Strangelove or: How I Learned to Stop Worrying and Love the Bomb Movie (1964)

'Dr Strangelove Or: How I Learned To Stop Worrying And Love The Bomb' is one of those movies that's held in high esteem by so many people that I've always thought I should watch it merely out of duty, if nothing else, but somehow I'd managed to avoid it until recently. It seemed to me that since it was the kind of thing that film critics praised, then it would most likely be a bit too high brow.
After all it's in black and white, which would put a lot of people off, and is often cited as another film where Peter Sellers displays his genius. Now the word 'genius' seems to be bandied about far too freely as far as I'm concerned, especially when it is applied to actors or comedians - a merry band who appear to indulge in back slapping at the drop of a script. Another reason that I felt I should watch 'Dr Strangelove' was that it was directed by Stanley Kubrick - another genius - but how many times have we been told that something is wonderful only to simply not get it at all and come away totally dismayed?

Now that I've actually had the chance to sit down and watch the movie, I have to wholeheartedly admit that all of those Smart Alecs who raved about it were absolutely right. The film is breathtaking in its effectiveness as a satire, very funny and also - upon reflection - somewhat scary.
It was released in 1964 when the Cold War was very much on everyone's mind but panic was controlled by the premise that every safeguard had been put in place to stop an accidental Nuclear War taking place. Every scenario had been considered and counter measures had been devised to ensure the safety of the whole world. Every scenario except one, that is. After all, who would have thought that one of the American Generals would become a raving loony who should never have been trusted with the remote control to a telly far less nuclear weapons and decide to start the war all by himself.

Originally planned as a tense thriller, 'Dr Strangelove' hung around for a few years until Kubrick realised that it would work far better as a comedy. Some of the lines take you by surprise but it's very often the realisation of the predicament that the characters find themselves in that makes you laugh.
Just as Group Captain Lionel Mandrake (Peter Sellers) feels he is making progress in trying to persuade the insane Brigadier General Jack Ripper to give him the codes to cancel the nuclear offensive, the crazy Yank goes into the loo and promptly shoots himself. There's no staff handbook guidelines on what to do in that situation.
As President Merkin Muffley (Sellers again) breaks up a fight between a Russian and an American he tells them they're not allowed to fight in the War Room. That's probably the most memorable line in the movie and it very nicely highlights the ridiculousness of the situation. You can nuke the living daylights out of an entire nation, but you can't fight in here.

The style of the set for the War Room is striking and reminiscent of a set for a Bond film and so it should come as no great surprise that it was designed by Ken Adam, the legendary production designer behind many an 007 adventure.
The film was originally planned to be shot in Hollywood, but as its biggest star - Peter Sellers - had an impending divorce which meant he had to remain in Britain, production was relocated to Shepperton Studios.
Sellers was probably at the height of his stardom at the time and Columbia Pictures only agreed to finance the film if he played multiple roles as they felt that he had been the reason for the success of 'Lolita'.
George C. Scott was encouraged by Kubrick to overact as General Turgidson - and indeed, I've never seen him give such an over the top performance - but it worked well within the context of the piece. Note to all actors - listen to the guy with the map.
Other great names in the cast include Sterling Hayden, Keenan Wynn, Slim Pickens and a young James Earl Jones.


The film was originally intended to end with a massive custard pie fight in the War Room, but this was cut as it was considered too farcical - and it would have been. The film would also have been less impressive because of its inclusion. Restraint is the best friend of any director. Another reason the sequence ended up on the cutting room floor is that the American President receives a pie in the face and this would have been in particularly poor taste - coming, as it did, hot on the heels of the Kennedy assassination.


This is one movie that is hard to review without giving away too much - as it would spoil a viewer's enjoyment. To see it for the first time is to see it fresh and to be affected by the film's message as well as to be able to laugh out loud at the situations that are so ridiculous - and have so much in common with 'Catch 22' that, while you may feel it's in bad taste, you just can't help yourself as it is genuinely funny.


Peter Sellers' portrayal of the characters is well observed and I particularly warmed to the ever so British, stiff upper lipped Group Captain Lionel Mandrake who desperately tries to retain protocol and politeness even though the end of the world may not be far away and he has been handed the task by fate of trying to stop it from happening. As the situation escalates, his efforts to keep a lid on the building panic within him and to deal with it all in a professional manner cause immense mirth.

Sellers is also great as President Merkin Muffley, who tries to break the news to his Russian counterpart that one of the American Generals has gone insane and that he shouldn't really worry about the nuclear strike force heading his way. It's all done in such a friendly, underplayed, human, one to one manner that it is hilarious.

The only character I had problems with was Dr Strangelove himself. I felt Sellers went way over the top trying to control his suicidal hand that it was uncomfortable, if not embarrassing, to watch and I thought it was somewhat self indulgent. Maybe if he hadn't been such a big star then perhaps he'd have been given notes on his performance by the director. As if my opinion matters when others call him a genius.


Overall, if you have never seen 'Dr Strangelove' then don't go thinking that all the critical acclaim makes it the territory of geeks and don't allow the fact that it was Stanley Kubrick's last black & white production get in the way. It's a clever film, for sure, but there are enough laughs to make it entertaining for a general audience and I'm only sad that it took me 46 years to get around to seeing it. Watch it tonight.
After all, someone might blow up the planet tomorrow.