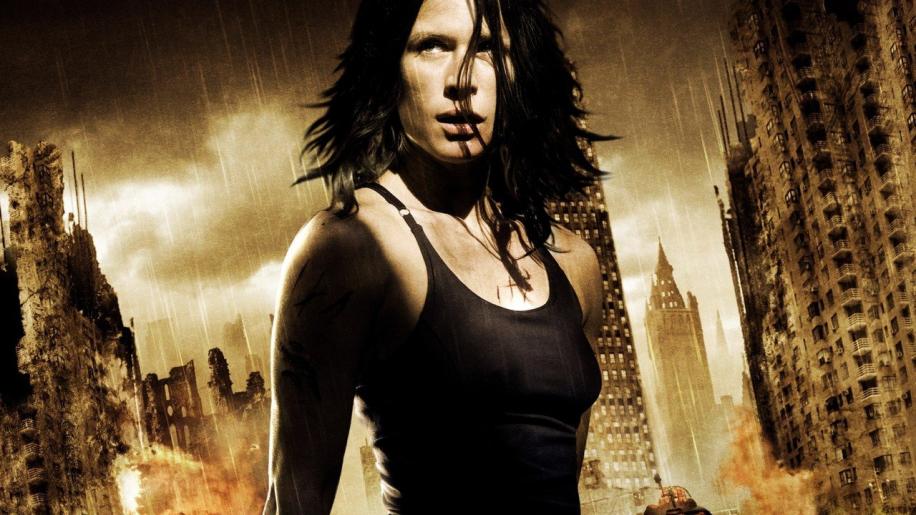 British horror movies (from An American Werewolf in London to Dog Soldiers) are as distinctive as Japanese horrors (the Ringu trilogy) when compared to their relatively routine Hollywood counterparts. Perhaps it's the wickedly black sense of humour, or maybe that the characters often feel a lot more real and a lot less like clichéd cardboard caricatures. Neil Marshall wrote and directed both Dog Soldiers and The Descent, both innovative, unusual (and dominantly) British horrors which left fans of his work eagerly anticipating his next effort. Well Neil, what on earth went wrong?

It is difficult to know where to begin when explaining the premise of this film (one of its many faults) but I'll do my best. Be warned, there are an increasing amount of spoilers in this review, as it will soon degenerate into something of a critical analysis of how badly a movie could go off the rails. After a deadly virus breaks out in Scotland, England decides that the best option is to isolate the area, sealing off the country along the line of Hadrian's Wall, mining and patrolling the surrounding sea borders and generally killing anything that moves. Leaving the inhabitants to die - the Government decides - is the best option, but three decades letter it seems the virus has returned, hitting The City itself, and forcing the ministers to seal off London. The Government then decide - having held back vital information that survivors were still in existence beyond the borders into the quarantine zone - that they must dispatch an elite special forces unit to find a cure within the walls.

Enter Major Eden Sinclair, a tough, no-nonsense lady who has her own personal demons, having lost her mother - and her eye - during the evacuation some thirty years ago. Worry not though, because the Major now has a better eye, one which she can pluck out and roll around corners so she can see (and video) what is going on. How handy. Sinclair gets to lead the team of grunts and scientists who - to cut a long story short - get into your standard “Aliens” predicament, losing most of their numbers, vehicles, weapons and ammo to an overwhelming force of would-be extras from a Scottish rendition of Mad Max 2. This is where things start to get particularly silly. Cue torture, a rip off from Beyond Thunderdome, a rescue from Back to the Future part 3, a journey out of the Fountain into Monty Python and the Holy Grail, a Gladiator fight with a medieval Robocop, a car-advert-style Mad Max 2 rip-off car chase and overtones of Outbreak.

It feels like the Director (and, shockingly, writer) took key ideas from a bunch of good (and bad) movies and spliced them together in a totally unconvincing fashion to create an MTV-style bit of nonsense that totally fails on ALL levels. Going from being the innovative, imaginative, original and darkly humorous mind behind Dog Soldiers, he has descended into the kind of film that looks like a glossy interpretation of what a couple of schoolkids might have put together for Youtube as a homage/collage of their favourite movies. This is - unintentionally - like Be Kind Rewind, only completely devoid of any wit. There isn't a single moment of originality, not one idea that has not been borrowed from another movie and - worse still - done far better before.

Now, there are straight-to-DVD studios out there that regularly churn out movies that rip-off big blockbusters (AvP spawned Alien versus Hunter, I am Legend became I am Omega and so forth) and these are really, really bad movies. But this is just as bad as any of them, only glossed up with a bigger budget, a more memorable cast, and a supposedly talented director on board. Personally, that makes me feel ten times more disappointed. I just expected... more.

Casting Rhona Mitra in the lead was not such a bad decision, but I think even someone of her limited talent would still regret being associated with this debacle. Probably more famous for being one of the original models for the Tomb Raider video games, than for the few movie roles she's had since (Hollow Man cameo, Highwayman) she is, oddly enough, far from the worst thing about this movie. Sure, her characters is preposterous, her actions even more so - particularly towards the end - and if she can't outrun a 70s Police Rover in a 200+ mph Bentley then she doesn't really deserve to be driving one (although that may be the case for many Bentley owners out there), but she can clearly provide a Michelle Rodriguez-level of female butt-kicking. She may have even, dare I say it, made a better live-action Tomb Raider.

Why Bob Hoskins signed up for this nonsense is beyond me, although he (or at least his character) appears to be suitably perpetually angry about the situation he is in. With his hands tied as the Major's commanding officer, he suffers under the corrupt manipulation of a misguided Prime Minister (sorry but Sudanese Alexander “Syriana” Siddiq - even in 30 years' time - isn't likely to become a Western PM, however wrong that may be) and his coldly calculating right-hand-man (David “Wanted” O'Hara). Sean Pertwee puts in a worthless cameo, probably to lend his name to the credibility of this dismal affair as a thankyou to the man who gave him one o the best roles he has had in the last decade - in Dog Soldiers. And Malcolm McDowell appears to have cultivated that Albert Finney-style Port-nose look, grumbling and mumbling through his lines - once again one can only assume - purely to get his cheque. His narration is just one example of how badly this movie went wrong - if it needed such an extensive explanation then clearly it was not telling the story correctly for the medium of film.

The end result is a terrible movie with an incoherent story, a horribly and painfully clichéd script that is never once brought alive by the bunch of average-to-good actors who put in average-to-bad performances in their roles as characters that nobody will like - whether good or bad. The villain is like a cross between Iggy Pop and Mad Max 2's Vernon Wells, the action is downright pathetic, the car chase is annoying, the horror is pointless, the soundtrack ranges from Fine Young Cannibals to Frankie Goes to Hollywood and the movie is basically one of the worst movies that I have seen in a long time. And I have seen all of Steven Seagal's straight-to-DVD productions.

By the closing credits all you're left with is a bunch of unanswered questions - how a wall can possibly contain a population of people who (we can only assume) have access to artillery and boats and aircraft, why the team is sent in by land when they could have been dropped in by chopper and saved themselves a whole world of pain, how come a short jaunt through a tunnel takes you back in time several hundred years and why people would ever choose to become PART TIME cannibals. The list never ends and however much you can try and suspend disbelief for some of these preposterous ideas, nobody has the stamina to ignore all of the glaring impossibilities. Especially when you're better off watching any of the Mad Max movies (even the third one) or Escape from New York instead. Now, is there anything redeeming about it? Well, frankly, no. Even as popcorn nonsense goes, it is just unpleasant and vapid. Go watch Aliens, Mad Max 2, Escape from New York, Outbreak, Excalibur, Resident Evil and Underworld back-to-back and - trust me - you've probably covered all your bases. And you would have saved yourself having to endure this incoherent, unpalatable mix of bits from all of the above. Because unless you're really drunk and/or really - really, really - easily entertained, this is one wasted chunk of your life that you just won't be able to get back.