One man vs Hell in a fight for Mars. Obviously. 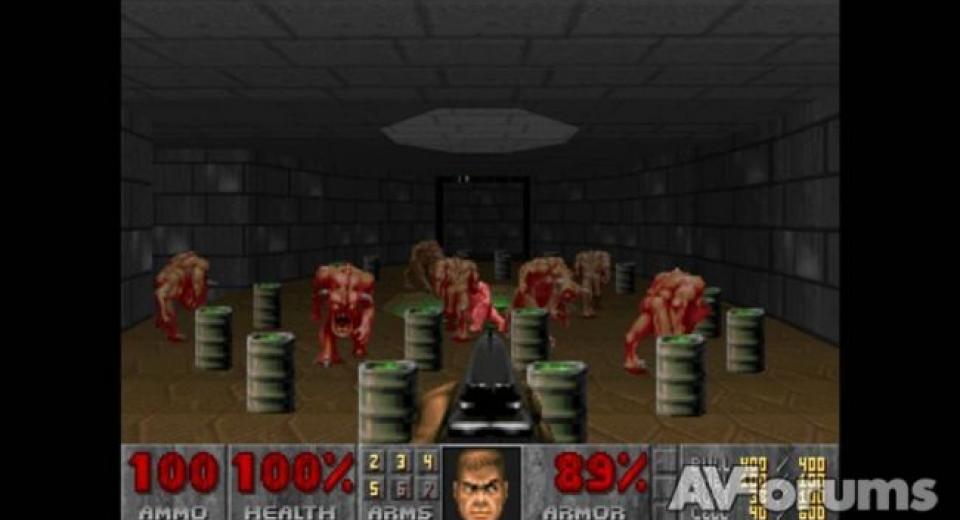 Twenty two point four three megabytes.
That’s Doom’s file size. 22.43MB. Want some context? How about this: five hundred copies of that file would take up less disk space than a PC install of Battlefield 3.
Two decades is a long, long time in gaming terms.
For better or worse, id Software are responsible for first person shooters as we know them now. Wolfenstein 3D laid the foundations in 1992 but Doom's debut the following year shot the genre into the mainstream. Releasing the first episode as shareware definitely helped; but it was Doom's groundbreaking gameplay mechanics and the controversy caused by its ultra-violent and blasphemous content that really caught the attention of gamers and non-gamers alike. The version of Doom Bethesda have re-released on XBLA is a port of the PC retail version (‘The Ultimate Doom’), containing all four episodes. It features adversarial multiplayer, a two-player co-op mode, and 200 achievement points. (NOTE: If you play Doom for achievement points, you're doing it wrong.)
The 80s and early 90s were the heyday of one man versus everything in film and TV. Doom, to that extent, is very much of its time. You are muscle-bound, gun-laden and nameless. Your fellow marines are all dead, and the forces of Hell are gathering in preparation for an assault on Earth. Only you can stop them. Classic.
You can find the original readme file here. It's well worth a look.
Doom is a game of excesses. It’s got chunky booming shotguns, monstrous floating-head baddies, and stats that exceed 100% on a regular basis. Need health? Why settle for one potion that can restore 50 health points when you can have a row of ten that restore five points each? That’s the Doom philosophy in a nutshell.
For those unfamiliar with the ins and outs of early 90s shooters, it’s interesting to note what isn't possible in Doom. You can’t look up or down. You can’t jump. There’s no running or reloading or rewards for kill streaks.
But what Doom does have is some degree of player agency, and levels that are actually designed. It couldn’t be further from the scripted corridors that pass for single player campaigns in modern shooters. All right, maybe I'm romanticising the search for coloured keycards to open coloured doors. But for all the innovation and development we've seen over the years, I think Doom stands up better now than 2012's shooters will in 2032. The big question, then: is Doom still fun? The answer is a resounding yes... for a few hours. But at the cost of a movie rental I'd say it's a good deal, even if you only get an evening or two's entertainment out of it.
If you're interested in multiplayer, a word of warning: At the time of writing, I've yet to experience an online game that's playable. The lag is appalling. I have no idea if there is a plan to get this fixed.
One final note: if your reason to buy Doom is for those few hours of fun I mentioned, then a quick download from Xbox Live Arcade is as good a way to buy it as any. But if you're thinking that you want a piece of video game history for posterity, then there's no case for buying from XBLA. You'll be lucky if Microsoft's downloadable games are available to you on the next iteration of the Xbox, let alone when you want to show your grandchildren.

Having been pulled some 15 months ago from Xbox Live Arcade due to licensing issues, Doom is back courtesy of Bethesda. Everyone's heard of it, and most of you will have played it: either as a youngster back in the early 90s or, if you're under 25 or so, as a retro curio from the era before regenerating health. Arguments will rage about whether or not this game ‘stands up’, but to have that debate is to look at Doom through the wrong lens. Its importance to gaming culture is beyond dispute, and if it's been a few years since you picked it up, now is as good a time as any to go demon hunting on Mars.