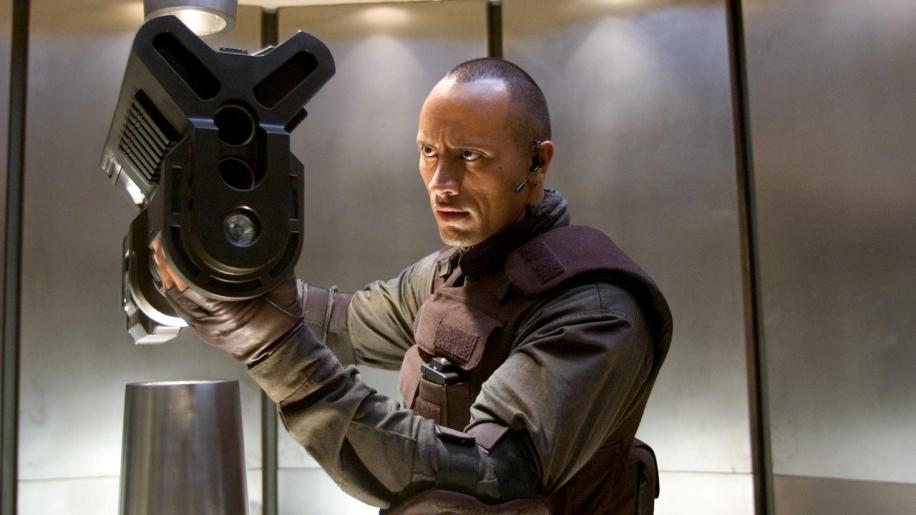 Universal has provided a theatrically correct 2.35:1 aspect picture anamorphically enhanced for widescreen TV's and boy does it look good. First up are the colours, all are thick, bold and striking, the primaries almost shine off the screen. This is help admirably by the contrast setting; the film is dark and the brightness has been set to give seriously deep blacks. Now there is a tendency for the blacks to take on a slight hue depending on the primary colour giving its contrast but this is a function of the print and not any digital problem. The detail level is spot on, even though the film is so dark there is absolutely no detail lost, you can still make out what is happening even in the darkest shadows. Digitally there were no compression problems but unfortunately there were a few instances of edge enhancement and it was this that has stopped the picture from being reference. For such a modern film there were also no instances of print damage nor was there any film grain. In all an excellent picture throughout.

The disc has been given three Dolby Digital 5.1 tracks, English, Spanish and French and which ever you choose you won't be disappointed. The English track, right from the off, hits you with an aggressive sound mix, heavy on the bass and spinning around the room. In fact there is never an opportunity lost to show off some surround effects and there are plenty. With all the running around the tunnels in the film the sound ramps up the effects by placing you in the tunnel, a drip from the front and howl from the rear, the mix is so good it actually improves the film. The speakers make use of the full range; it has incredibly heavy bass, so much so that I even had to turn my sub down a notch and the LF effects come thick and fast. Gun shots, explosions, the rumble of the facility, your neighbours will hate you. All this is good, but I felt that the midrange was ever so slightly lacking thinning the sound into bass and treble; without a thicker midrange it was less rounded than it could have been. There is directionality given to the dialogue too, and although it was clear and precise there were occasions when the score did win out over the lines. Talking of the score, it is pumped through all the speakers to really make the floor shake. It is a thumpingly good sound track and will really give your system a thorough work out. The Spanish track has the same mix but is a little quieter, the French is as loud as the English.

Not a bad, albeit small, selection of extras accompany the main feature, the first up is entitled Basic Training. During the short run time we are introduced to Tom Mcadams, an ex-special forces soldier brought into the production to teach the actors military tactics and weapons. One of his goals was to ensure that the actors looked and behaved like a military unit, which involved team building exercises, weapons training and general soldiering. Plenty of behind the scenes footage of the actors training as well as interviews with major cast and crew are slightly padded with film clips. On the whole an interesting if not totally original little feature.

Next up is a five minute featurette on the makeup and prosthetic needed to turn the Rock into his demonic alter ego. We hear from the designers and the artists themselves as well as watch the procedure as the Rock has everything applied to him, including the painting out of his tattoos. Short but interesting.

Following on from the above featurette we have Master Monster Makers, this concentrates on the creature effects and animatronics used throughout the film. We trace their development through the design stage through to their appearance on film by interviews, concept art, behind the scenes footage and finished product. Hell of a lot of information packed into the short run time and was quite interesting.

The First Person Shooter sequence is not surprisingly about the design and shooting of the five minute 'game' sequence from the film. Interviews are conducted with the production designer who doubled up as the director of this sequence. We are privy to its concept and development through the various stages needed to produced the finished produced. Neatly chaptered in to parts this featurette allows you to skip and miss all the behind the scenes interviews and go straight into the unabridged sequence should you so desire.

Perhaps the most interesting of all the extras is Doom Nation, in which extensive interviews are conducted with the creators of the original Doom game through to their development and release of Doom 3. Plenty of information as well as game sequences are shown.

Perhaps the most useless of the extras is the Game on featurette which is essentially a huger advert for Doom 3, with helpful game tips such as “use your torch” or “save often” whilst watching plenty of game footage.

Finally there is a playable demo of Doom 3 for those with an Xbox.

Personally I found Doom all rather dull and boring in a been there done that sort of way, my eighteen year old son, however, thought it was the best film he'd ever seen. Though that will no doubt change when he sees another film. For Doom is a film for this generation, quick cutting, loud music, instant horror. Watch with the correct mind set and there is enjoyment to be had, for me that means alcohol. Universal have once again proved the money making scam by releasing a different film theatrically to the one available on DVD. However as a package it's not too bad, the extras cover wide aspects of the film and are entertaining to watch. But the real winner is the picture and sound, if only it was a better film......