"Ugh. More TV superheroes, just what the world needs. Be honest, have you hung yourself yet? Or, what if I told you this was actually a story about super-zeroes? How about it? Ready to feel better about your own miserable lives for the next hour or so?" 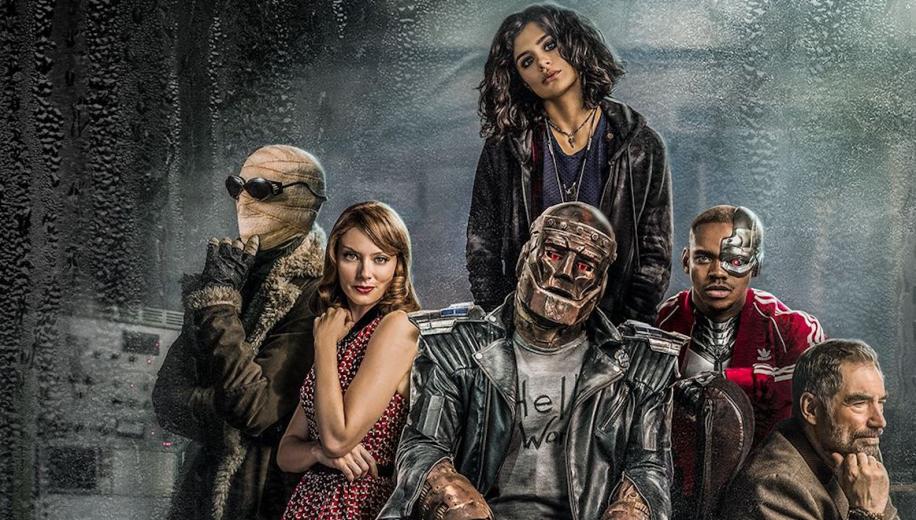 Until now only available on the Starz subscription platform (itself only available via Amazon Prime in the UK), Doom Patrol was just released on UK Blu-ray, and with the second season due to drop next week (again, in the UK, the US have had it a little longer) there's no better time than now to catch up on a disparate group of individuals who could easily turn into your favourite team of super-miscreants.

If you remember them being introduced in DC's Titans (surprisingly dark, not without flaws, it's far superior to much of their cinematic work), that Doom Patrol was actually from a different continuity, still offering a tease in terms of their offbeat humour, wacky personas and crazy antics, but you probably don't even need such a confusing tease to dive straight into t﻿his Doom Patrol's fabulous adventures, which invests its early episodes into the backgrounds of a few of the colourful characters you meet (Cliff Steele's "robot man", Larry Trainor's "bandaged man", and Rita Farr's "melting woman"), before introducing the one you might be more familiar with - Cyborg - and then wisely slow-burning the background to the most complex of the lot, Jane, who comes complete with a James McAvoy/Split-topping 64 personalities.

Could easily turn into your favourite team of super-miscreants

Cliff Steele was once a NASCAR driver, but after a horrific accident he finds himself reborn as a brain in a robot suit courtesy of Niles Calder, an elusive, wheelchair-bound scientist who runs something of a sanctuary for lost souls, having already taken on board Air Force test pilot Larry Trainor - who also suffered an accident which left him instilled with powerful spirit that is occasionally unleashed - and former Hollywood starlet Rita Farr, whose brush with some kind of toxin basically turned her into a blob which takes great concentration and energy to turn into a human form. When Calder gets kidnapped by his arch-nemesis, super-villain Mr. Nobody, the team have to put aside their differences and choose to do something vaguely heroic, drawing in wannabe Justice League addition Cyborg along the way, as well as the dangerously volatile multiple-personality Jane, discovering more about themselves in the process, and more about their beloved leader too.

﻿Although borne from DC comics, and - as is evident from not only Titans but the recent appearance in the Arroverse Crisis on Infinite Earths - Doom Patrol actually feels most closely related in style, tone and format to Netflix's surprisingly good Umbrella Academy (the second season's coming at the end of the month), in terms of its odd group of misfit lost soul antihero superheroes, with a troubled past, and a mentor / leader replete with dark secrets. There's a touch of the period / steampunk about it, and more than a hint of Watchmen about it, as well as possibly even Stranger Things when it comes to the supernatural town-eating shenanigans that transpire. And, of course, X-Men gave birth to the whole idea of troubled but gifted individuals in a school where they can harness their powers, even if these characters probably wouldn't have been admitted to that particular academy.

What really makes a difference is the nightmarescape storytelling - from an imploding town to a donkey with a gateway to another dimension; from a Nazi superpower retreat in Paraguay to the "lost city of Nurnheim" and a dog and a magic bell. There's a possessed street, a vengeful rat and illusions galore, and that's even before we get to an entire 'underground' packed with all of Jane's 64 personalities. It's complex, superbly unravelled and utterly compelling, relying on superb characters and even better performances to draw you in for a wild and wonderful voyage through the utterly insane. Oh and the villain? He's an inter dimensional super villain who often breaks the fourth wall to narrate events which have already transpired on his temporal plane.

It's complex, superbly unravelled and utterly compelling, relying on superb characters and even better performances to draw you in for a wild and wonderful voyage through the utterly insane

The surprise late-stage career performance award clearly goes to The Mummy's Brendan Fraser, who has an absolute blast as the very angry, but frequently means-well Robotman, whilst Matt Bomer (recently in Sinner Season 3) plays the bandaged test pilot LT, and April Bowlby utterly, utterly embraces the Golden Age Hollywood starlet role of Rita, to the point where you feel like she was born from another time. Clearly Diane Guerrero (Orange is the New Black) gets the juiciest role(s) as the multi-personality Jane, with it taking most of the season to even scratch the surface of her complicated character.

Then there's Timothy Dalton, who is billed as more of a 'guest star' but thankfully has quite a lot of meat at least in the early episodes and - despite being 'kidnapped' - across most of the rest of the season courtesy of flashbacks. Dalton gives the entire show that extra level - much like he did Penny Dreadful - and is an absolute joy to have on hand, particularly when paired with Serenity's Alan Tudyk as the eccentric psychotic villain Mr. Nobody.

You're never quite sure what you're going to get from the next episode of Doom Patrol, which is part of the genius of the series, but it won't take long to find yourself hooked on what is one of the best shows around, and absolutely itching to see what happens next. Thankfully, it's not long until we get to find out. Whether you investigate it through Amazon's Starz add-on, or pick up the Blu-ray, there's simply no better time to get on board the crazy train.