"No one else gets sent on a mission by a time-traveling bird lady to go hunt down some art freaks who pissed off a half-man, half-butt monster who may be trying to destroy the world." 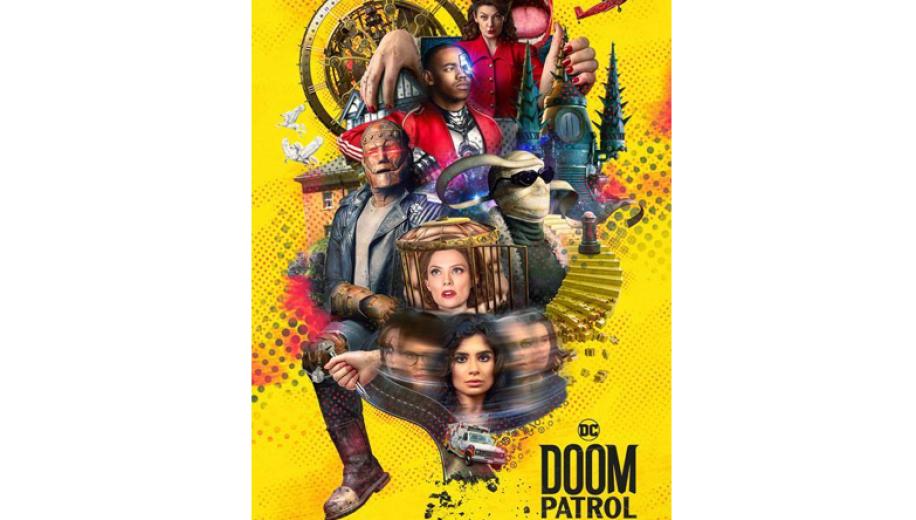 Continuing to stand out amongst the rest, Doom Patrol enjoys leaning into its horror roots for a superb season of zombies, resurrections, astral projections, time travel and dance numbers.

Arguably Starz' best ongoing TV show - and reason alone to take out a sub-sub on your Amazon account (even if only for a month or two a year) - DC's Doom Patrol may have emanated from a backdoor pilot on DC's Titans (which airs on Netflix) but it's just about the craziest superhero show since... well, Legion. Indeed Netflix's The Umbrella Academy - a damn good effort at different - could learn a lesson or two from this seemingly immeasurably out-there series, which has been renewed for a fourth season already because, you know, there clearly is some justice in the world.

NOTE: THIS IS A REVIEW OF SEASON THREE - PREPARE FOR SPOILERS FOR THE PRECEDING TWO SEASONS...

As his half-ape (long story, related to falling in love with a prehistoric woman) daughter Dorothy reaches maturity, Niles "The Chief" Caulder reaches the end of his run, a potentially world-destroying nemesis - The Candlemaker - is coming to town to destroy, well, everything. So... business as usual for The Doom Patrol.

﻿You would think that a show like Doom Patrol might hit a lull at some point, given it has spent quite so long eschewing the normal and largely showing that its team of unlikely, disparate and highly dysfunctional misfits simply cannot work together. Sure, when something utterly crazy and world-ending - like Alan Tudyk's Mr. Nobody - rears its head, they bumble into some kind of unstoppable unit, who appear to be able to deal with opponents that nobody else in the world (or beyond) could possibly handle, but in the day-to-day, these guys just do not get along.

Season 3 isolates what could be the root cause though - Tim Dalton's The Chief, a highly intelligent and gifted, but only seemingly benevolent benefactor who put them all together, but not without his own reasons, and not in wholly wholesome ways. Season 2 stacked the odds and the team increasingly against him, and Season 3 wastes no time in showing us life without him, dealing with the wake of The Chief for several episodes but also showing the Doom Patrol coming into their own. At least after they've visited the afterlife and turned into zombies, that is.

... the Doom Patrol coming into their own

Brendan Fraser's Cliff Steele - the cyborg who looks like a blocky, old fashioned robot - continues to be the greatest thing about this show, absolutely the best performance of his career, utterly unleashed every time he opens his mouth and lets loose a barrage of hilarious and often venomous profanity. It's literally worth watching the show for him alone, although the paths of all of the Doom Patrol continue to expand with intrigue; from April Bowlby's Rita Farr, who embarks upon a tour as 'The Beekeeper', still struggling to control her powers, and letting go of her acting aspirations while embracing her role as a potential superhero; to Diane Guerrero, who is forced to face her multiple personalities and then some. Meanwhile, Matt Bomer's Larry Trainor is given the most tragic plight, thanks partly to his dealing with his family history, but also his future 'family' courtesy of the negative energy he still hasn't come to terms with - although curiously that's often the story arc that feels the least compelling. Joivan Wade's Cyborg gets some decent airtime, his own tragic love interest, and struggle with his own tech - and it's mad to think he was represented so damn differently in the mainstream Justice League (though served infinitely better in the Snyder Cut) as this Cyborg is actually gifted a character.

The Doom Patrol continues to take its sweet damn time to develop the group, their powers, and their teamwork, but that's become par for the course, and it's not like we don't see them organically grow, it's just on its own timescale. And when you get the chance to see zombies fighting brain-eating butts, a battle with Death's minions, or some dark - and eventful - time-travel/flashback mayhem, not to mention a fabulously fun impromptu dance, who honestly cares? You mostly just don't want this wacky ride to end.

The Doom Patrol Season 3 comes to the UK as part of an Amazon/Starz Subscription, available weekly from 14th November 2021.