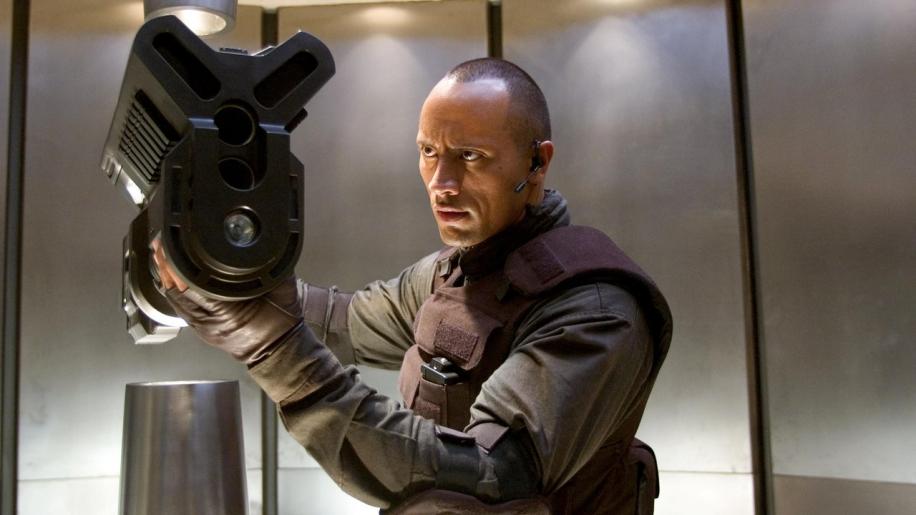 Doom is presented in a broad, 2.35:1 aspect ratio anamorphically enhanced widescreen transfer. Detail is generally excellent, with clarity throughout, no noticeable softness, negligible edge enhancement and no apparent grain. The colour scheme is slightly restricted by the settings and the theme, but the facilities look suitably clinical, the blacks allow for solid, potentially scary shadows and blood comes off as deep, blood red. Skin tones are also well represented and the transfer itself has no signs of any kind of print defects. Overall it is a solid transfer, the kind you would expect for such a recent, reasonably-budgeted production.

We get two solid six-speaker surround sound tracks to accompany the movie, a Dolby Digital 5.1 effort and a DTS mix. Both present the dialogue at the forefront - from The Rock's barked orders to the screams of the dying. The sound effects are obviously fairly prominent, with gunshots bearing over the rest of the sounds but plenty of little eerie touches to keep you focused and allow for some tension, as well as those expected 'jumpy' sounds designed to scare you. The score (typically rock-orientated, as appears to be the norm in many action movies these days) builds up during the slower 'plot development' moments, but really shifts up a gear for the action sequences, even providing a little bit of bass. There is little difference between the tracks, although the DTS mix is slightly more potent and is likely to be the preferred choice for those who have one.

The Basic Training Featurette takes a ten-minute look behind the scenes at the training that the characters who played Marines undertook in order to prepare for the movie. The Rock, Karl Urban et al. are on hand to talk about the physical fitness training and weapons training that they went through, with much of that being reflected in the actual footage shown. There are also contributions from ex-SAS trainers that helped them look convincing. This is quite an interesting offering, but does not particularly enhance the movie itself, because the military skills shown in it were not all that apparent.

The Rock Formation Featurette is a little over five minutes long and looks at what they did to the Rock for the role, the makeup applications and the various designs that they used to make him look such a bad-ass. The Rock talks briefly about what he went through and we get a day-by-day video diary of how it all came together.

The Master Monster Makers Featurette is over ten minutes long and looks at the various creatures that they designed for the movie, whether the man-in-a-costume monster, the animatronics or the CGI creatures. The crew discuss the original games, the different monster concepts and how they were all brought to life by Stan Winston Studios. Some of the cast discuss their impressions, but this is largely technically-orientated, offering you a (slightly too) revealing look into the monster effects.

The First Person Shooter Featurette is six minutes long and has lots of behind the scenes footage of that key FPS sequence, explaining how they put together this particular scene, the lengths they went to in terms of real-life and CGI effects and the end result. The crew discuss the storyboards, the animatics, the rehearsals, the effects added and generally how hard it was to do.

The Doom Nation Featurette takes fifteen minutes to look at the origin of the FPS, from the first ever Doom game (which looks distinctly dated now), to Wolfenstein, to the latest versions. There is plenty of game footage (really showing you how far we have progressed) and lots of Doom fanboys (and creators) on board to talk about their young adult experiences of making and playing FPS games.

The Game On Featurette runs at seven minutes in length and is just footage from the latest Doom game itself, with a Doom fan commenting on it, talking you through the action and discussing the clever concepts behind the game. Unfortunately the game looks so good here it makes you doubly disappointed with the movie itself.

Trailers on disc startup for Jarhead and Serenity which are both available from the main menu.

Doom is sure to please those who aren't looking for a great deal in it, a distinctly average b-movie with guns and violence. It's been released here with decent specifications and a few nice extras - along with extra footage in the form of an extended cut - so fans of the movie are going to want to pick it up. The reality, however, is that it is a disappointing movie, for fans of action movies in general and fans of the original game, so please be wary of your expectations for this particular release. As I've stated, if you go into it without high hopes, you are likely to still enjoy the guns and guts of it all.