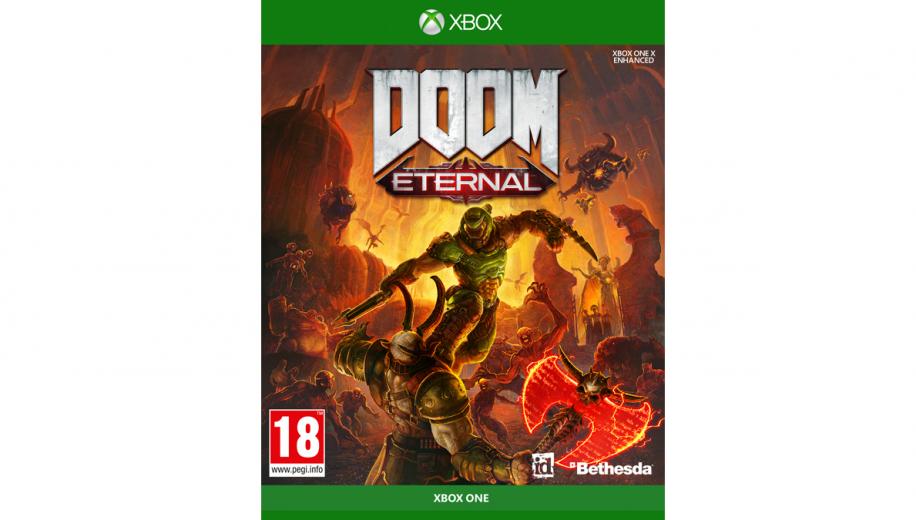 A direct sequel to the acclaimed 2016 ‘reboot’ (or the DOOM 4 that never was), DOOM Eternal has much to live up to. Not only does it have to match its hugely popular sibling in terms of being a fast-paced roller-coaster of gleeful destruction, but it also boasts a rich heritage that helped pioneer the FPS genre as a whole. Such is the series’ stature that it’s one of the few where we feel its insistence on using capital letters is entirely justified. In DOOM Eternal, you’re back as the bad-ass DOOM Slayer, also known as ‘Doomguy’ if you don’t want to shout about it. This time the action swings you back to Earth, as the demon invasion regains momentum and threatens to wipe out the planet and so it’s time to strap on your bestest BFG and get ready to raze a little hell of your own.

You don’t need to have played the previous games to jump into this latest adventure. We could knock the story as being secondary, and really most of the time you don’t need a reason to unleash a chaingun into a demon’s face, but there is plenty to dig into if you do want to add a little non-eviscerated meat to the bones, while DOOM fans will find plenty of welcome nods to previous events and harking back to the Slayer’s own origins.

As usual, you start out with just the basics in the form of your combat shotgun and your iconic chainsaw. However, it’s not long before you start unlocking your first mods – attachments which give each weapon a beautifully stylised side-dish on the left trigger, such a sticky bomb grenade or ‘full-auto’ option for your shotgun, with later weapons getting some really cool extras.

You’ll also begin to find runes hidden around each location that give you up to three perks. You can mix and match these how you like, but by playing with a few combos you can find some great variants on your own playing style. We went all-out on the returning Glory Kill option, with super-slick takedowns of staggered enemies, but you can also tie together perks such as slowing down time while increasing aerial movement to dish maximum damage from the air. Although the first mission (out of 13 in total) is pretty straightforward, the action does ramp up fairly quickly over the next couple. Although you will have picked up some useful additions, such as the shoulder-mounted Flame Belch flamethrower and the super-melee Blood Punch, and maybe also found a Sentinel Crystal to boost your health, armour or ammo, things can get very tough, very quickly.

Once you’re free from that early comfort zone, you’ll start to find yourself vastly outnumbered and with enemies honing in from all angles. Whereas in likes of the recent Zombie Army 4 you could stand your ground to repel the hordes, in DOOM Eternal staying mobile is the key to survival and it makes the action feel so much more fluid and immersive as a result.

Of course, the flipside is that you may well find yourself running in the same circles on more than a few occasions, desperately searching for health or armour pick-ups to keep you in the fight. It can also mean that, unless you’re a DOOM veteran who thrives on the challenge of the upper difficulties, those first few missions can seem like a bit of a grind. You can drop the difficulty level at any time without punishment, and for casual gamers looking to find their footing we’d certainly advise it because DOOM Eternal can be relentlessly intimidating if you let it.

However, once you do get to grips with the sublime mix of weaponry and mobility at your disposal, the game really does begin to come into own. Every single weapon in your arsenal is awesome in its own right, even without the choice of mods each one has, and equipping your favourites is like only being allowed to choose two sweets at a pick ‘n’ mix. Throw in a choice of grenade, the Flame Belch, chainsaw and Blood Punch and it feels like almost every button on the controller is capable of instant mega-death. And this is before you find the inevitable room-clearing BFG and the Crucible sword which one-hit kills everything.

That’s largely where the joy of DOOM Eternal comes from; it’s about stringing a combo of gloriously brutal kills and mixing up your attacks with some slick and agile navigation. Perhaps the most satisfying part comes from farming the lower level enemies for resources, with Glory Kills returning health, the Flame Belch causing ignited foes to drop armour shards and the chainsaw opening up a gut full of ammo. Juggling toe-to-toe shootouts against the heavy enemies with self-preservation while topping up on health and supplies is like DOOM’s own magical ‘circle of death’. Calm Before the Storm

Unsurprisingly, the gameplay is largely linear, leading you from one arena fight to the next. However, the developer has done a decent job in opening things up beyond the core combat to a certain extent. And, to be honest, most of the time this comes as a welcome breather to what can be some very intense and frequently drawn-out bullet ballets.

It’s not exactly Tomb Raider, but there are a few side-tunnels and hidden rooms that offer up a decent number of collectibles and rewards to hunt down; some purely cosmetic, some providing worthwhile upgrades to your kit. Of particular note are the extra lives you can pick up, which provide an instant revival should you get downed in a fight. You can have up to 20 at any time, and before taking on some of the tougher levels or boss fights, there’s no harm in replaying a few earlier levels to grab a few spares (unlike the other collectibles, extra lives reappear for repeated missions on the same saved game).

Navigation offers up the usual array of wall climbing, pole swinging and double jumps, with a dash option offering further ground or mid-air agility. These are often required to move around the map during those quieter moments but can also be brought into combat with great effect. During exploration things can often become a little awkward, with precision timing or tricky sequences involved (at one point you need to shoot a small target to open a door while swinging through the air), but there’s only a small health/armour loss if you do miss a jump and fall into the abyss below – so a little trial and error isn’t overly punishing. Although it can be almost overwhelmingly intense at times, making it maybe a game to be enjoyed more in bitesize chunks rather than a full-on weekender, DOOM Eternal is still incredibly fun to play for the most part. Visually it’s hugely impressive, with great backdrops and super smooth action which sees enemies visibly deteriorate under fire so you can gauge how much health they have left.

Although the standard versions only run at 1080p, that is at a near-flawless 60fps, while the enhanced versions can be upsampled to 4K from 1440p at the same framerate. It also boasts HDR10, although you’re usually far too focused on staying alive to truly appreciate it, but it is noticeable how distinct things like fire effects and incoming enemy projectiles stay strong against the war-ravaged backgrounds. There is also an excellent audio package at play. It’s not intrinsic in terms of the actual gameplay, as everything is coming at you from all angles and pretty much all the time, so a true surround experience would be like drowning in a well of sound. Instead, its more about the overall immersion in the gaming experience, with another cracking soundtrack fusing heavy rock with techno to really hype up the combat, while slow screeching strings and haunting effects that echo through the walls mean that you’ll rarely feel comfortable even when you’re in a safe space.

There are a few niggling flaws that can detract from the overall enjoyment. We’ve mentioned some awkward navigation and there are a few times where a puzzle element or hidden pathway isn’t particularly obvious or even hinted towards. While dealing with huge numbers of enemies it certainly doesn’t help that it’s a bit too easy to get trapped against a wall by even the weakest fodder, while a lot of hits can easily knock you off your stride or send you flying – all of which can kill your momentum, and all of which seemed to collide in one mission that sucked the fun from the room during one irksome session.

However, as a complete package DOOM Eternal is a brash assault on the senses and one that warrants repeated playthroughs. There are mission-specific tasks and other weekly challenges to boost your overall rating, and repeating levels to mop up collectibles or perhaps build towards the higher difficulties once you have a fully-upgraded Slayer to play with certainly holds merit. That mission we just mentioned did become a lot less frustrating the second time around – although we’re still some way off even considering it on the toughest ‘Nightmare’ or the one-life ‘Ultra-Nightmare’ difficulties.

We should note that there is a multiplayer element, with a 2v1 BattleMode seeing two players taking on the roles of demons battling against one Slayer in the best of five rounds – but it wasn’t online when this review was written. However, the previous multiplayer wasn’t great and it seems like this is more of a side-dish than any great game-defining addition, but there could be more multiplayer options to follow (a mode to invade other SP games as a demon has been touted) so it could add some extra value from time to time. DOOM Eternal is as simplistic in its set-up as it is beautifully layered in its execution. The task is to kill every maternal fornicator in the room but there’s a glorious multitude of stylish and savagely brutal ways to go about it. It can be tough and almost over-whelming at times, which might not make it quite as appealing to the casual adventurer, but seasoned shooters should relish the challenge.

Those that do will be treated to some delightfully slick bloodbaths, fusing an awesome arsenal with a demand for quick feet and even quicker reflexes which can be ridiculously satisfying when it all comes together. At its best, DOOM Eternal is about as much fun as we’ve had in an FPS arena for a long time – and it doesn’t drop too far from its best very often.