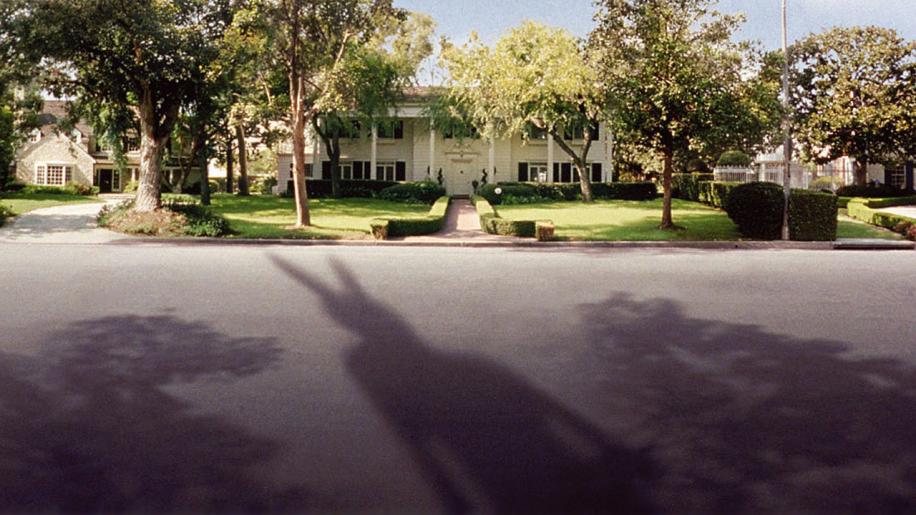 “Donnie Darko” was one of the biggest sleeper hits of 2001 with the majority of viewers having either a love it/hate it reaction following its release. The concepts and ideas portrayed created quite a stir in the movie going community as many pondered its true meaning (and still do). Richard Kelly makes his directorial debut with this thought provoking piece of filmmaking and also penned the script. With an ever increasing fan base, Kelly has created a cult classic with his first feature presentation. This Blu-ray release contains both the original theatrical version and the extended Director's Cut of the movie.


Jake Gyllenhaal (still a relative unknown at the movie's release) plays the title role and is strong throughout. Donnie Darko is a complex character with two alter egos; a seemingly normal teenager with a demented flipside capable of creating chaos through random acts of vandalism with warped satisfaction. Gyllenhaal nails this dual persona and is thoroughly convincing with a deep seated understanding of how Darko should be portrayed. The unhinged, bowed head twisted smile that he gives the camera can be very unsettling. Jake is joined on screen by his real life sibling Maggie, who turns out a strong performance playing Donnie's sister Elizabeth. This movie contains a selection of characters that are developed to a certain degree and simply provide reaction to Donnie's exploits, not adding much to the main plot but integral to the film as a whole. The exception to this rule is Donnie's girlfriend Gretchen (played by Jena Malone). Holmes Osbourne (Eddie Darko), Drew Barrymore (Donnie's English teacher), Noah Wyle (Donnie's Science teacher) and Patrick Swayze (yes Patrick Swayze as Pat Cunningham) all do a fantastic job portraying what are essentially background emotional characters. Donnie's mother (played by the excellent Mary McDonnell), and his sister Sam (Daveigh Chase), form a larger piece of the puzzle involving Donnie and his “friend” Frank (James Duval).


“Darko” opens with some beautiful camera work as we're first introduced to Donnie and his entire family in the October suburbia of 1988. There are some nice stylistic touches such as Rose Darko reading Stephen King's “It” as the music playing in the background (through all speakers) becomes centralised to the radio in shot. We see in the opening scenes that Donnie has just woken from some sort of blackout episode but has a faint smile on his face as though he enjoyed the experience. It's explained through a conversation with his mother that Donnie has in fact being having regular blackouts as well as sleepwalking episodes. We see he has been attending a psychiatrist and taking medication to try and resolve his issues. Donnie is an undoubtedly bright but very troubled individual and is hostile towards anyone who questions his unusual behaviour. It also transpires that Donnie gets regular visits from his imaginary friend Frank, who happens to be a 6ft rabbit with a terrifying face.

Frank is in fact a time travelling rabbit who instructs Donnie to carry out seemingly random acts of vandalism which infringe upon and disrupt the lives of others (to varying degrees of severity). When performing these tasks Donnie enters a sadistic trance like state and has vague recollections of what he has done. Frank also instructs Donnie on the theory of time travel and Donnie begins to see that each human possesses an inner being that leads us on our channel to the future and serves to guide us through life on a set path. These beings can see the future, can time travel through black hole portals and are capable of other incredible acts. They dwell and protrude from the solarplexus and resemble a bubble crossed with the water alien being from “The Abyss”. Already this review is sounding ridiculous! As a jet engine plummets from the heavens annihilating Donnie's bedroom, Donnie himself is safe on a secluded golf course, enraptured by Frank's revelation that the world will end on the October 30th 1988. Donnie believes that because he was out on a midnight stroll at Frank's request the monstrous lapin actually saved his life and so is willing to blindly follow his unusual instruction. Yes, things are getting very strange indeed in the world of Donnie Darko, and eventually we see that he will make the ultimate sacrifice.

As the movie progresses Donnie undergoes a transformation and appears to reach a higher state of consciousness and understanding with regards to the strange motions of fate. We're led on a complex journey of intertwining actions/reactions as Donnie performs increasingly bizarre tasks at the request of Frank. While initially appearing banal, they eventually come together to form an intricate piece of storytelling, drawing from broad and open concepts such as the space/time continuum, fate and various other enigmas of our existence. Although Donnie has plenty of friends/family to interact with, who are involved in their own subplots, they primarily provide visual feedback to the strange on screen happenings. Although not developed to any significant degree we do get to know their personalities and so value their reactions and appreciate their feelings

On the whole “Darko” is a very enjoyable movie with Kelly's visual style introducing us to all the characters in a sweeping manner with accompanying 1988 soundtrack (with Tears for Fears and Duran Duran featuring). Camera work is superb with some great inverted and rotational panning shots adding to the chaotic nature of the source material. The inclusion of a visual timeline to the movie's climax actually works well and I enjoyed the unfolding of events that eventually intersect to form an incredibly cerebral piece of filmmaking. Kelly also includes some pop culture humour such as the Smurf debate and references to the greatness of “Back to the Future”in conjunction with the foul mouthed bickering between the brother/sister Gyllenhaal combination and of course Sparkle Motion, to add some dark comic relief. In the original cut of this movie the meaning and reasoning behind the story is somewhat vague and shadowy. In my opinion, movies that make the audience think and use their imagination can produce the best results, much like reading a good book.

What is “Donnie Darko" about? A herald that our way of life is being corrupted by our own ideals, beliefs and idiosyncrasy and that we're heading for disaster (with political undertones)? Is it a medium for Richard Kelly to get some of his own theories about the space/time continuum across while borrowing from great minds such as Stephen Hawkins to open up the possibilities of alternative universes? To open our minds to the possibilities of other Gods and Godlike beings who have the power to irrevocably change our lives, leaving our own God of choice out of the equation? Perhaps it's a message that the world is better off without certain types of people as they only serve to ruin the lives of others and contribute nothing but evil and sorrow? Does everything we do echo in eternity (to quote a classic!). Or perhaps it's simply Richard Kelly's way of putting his own unique stamp on Hollywood with an unusual love story that challenges audiences mentally rather than just giving them another mindless action flick. Whatever the reason, “Donnie Darko” remains a fantastic film that passes boundaries with style and content that will challenge for years to come. And remember that writer director Kelly was only 26 when this picture was released (he also penned “Visceral Matter”). Mullholland Drive, Memento and Vanilla Sky were all released in 2001 - a good year for the obscure subgenre that these four movies find themselves in. A unique movie that is truly thought provoking but requires more than one viewing to fully appreciate.

The Director's Cut, released in 2004, adds another twenty minutes of Donnie delight to the original theatrical release. There are a couple of minor changes such as comments from Donnie's father that someone is watching over Donnie, giving further indications of his supernatural nature. Also included is the scene where Donnie's English class discuss “Watership Down”. The most noticeable difference in the Director's Cut, aside from some obvious soundtrack changes, is the addition of excerpts from the “Theories of Time Travel” novel. These cryptic writings contain detail of how beings from parallel dimensions look to save their alternative selves in our universe. It mentions that artefacts from an alternative universe can enter our world, disrupting the natural order of things and putting all of mankind in mortal peril . These artefacts must be guided back to the primary universe by the living receiver (that's Donnie) to set the balance of existence back in order. Although highly complex, these serve to focus the story on the science fiction aspect of Frank and Donnie's relationship, but analysing them can lead to heightened levels of confusion. I have to say that I preferred the theatrical release as the excerpts from the book could at times distract from what was happening on screen. This is primarily because I spent a lot of time trying to figure out the meaning of these cryptic passages long after they had left the screen!