Donkey Kong leaps onto the GamePad. Sort of. 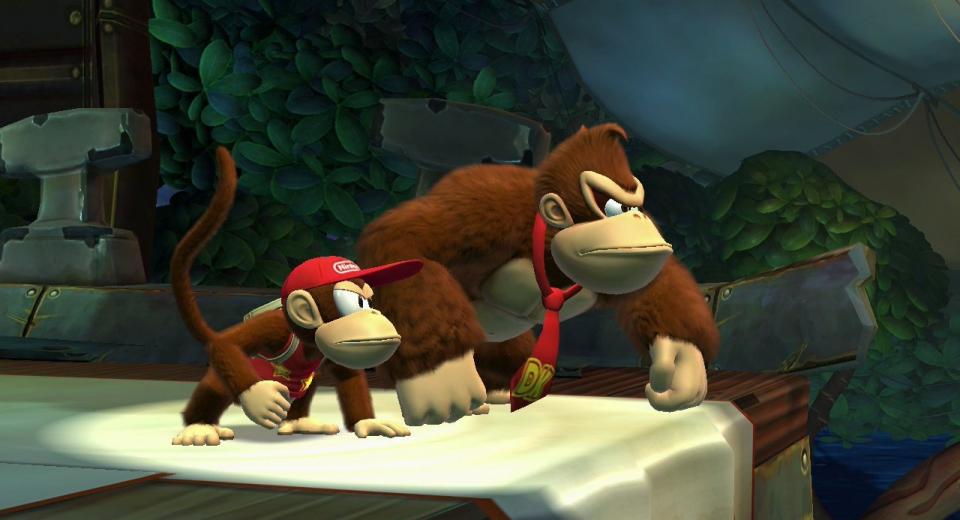 Third party support may be thin on the ground, but the first party old guard are pumping out identifiably Nintendo titles at a steady rate.

The latest in this line is Donkey Kong Country: Tropical Freeze, from Retro Studios. A sequel to 2010’s Donkey Kong Country Returns, the switch to new hardware feels less of a generational leap and more a sideways step with some incremental benefits.

The added power of the Wii U gives us 1080p visuals and some fine graphics details, but the switch to Nintendo’s new tablet-cum-controller, the GamePad, is not as noteworthy. It's an additional control method rather than something that's been specifically designed around. You can still use the Wiimote, Wiimote and nunchuk, or the Pro pad.

In what must be considered one of the more damning indictments of the new fangled controller, Retro have swerved making it an integral part of their gameplay plans.

Games that use the touch screen simply as a proddable palette for selecting power ups have been rightly criticised, but Tropical Freeze takes that minimal integration a step further: you either play the game on the GamePad or the TV. There are no second screen features. Choose the TV, and that 6.2 inch resistive surface goes blank, like an unmarked gravestone for the Wii U’s unique selling point. Luckily the core game raises more of a smile. Any reworking of the Donkey Kong formula has had as little thought applied to it as the GamePad’s use, which means this is a sequel in every sense. Look past the niceties of the resolution bump and some subtle fur movement on Kong and this could easily be a Wii game. That may seem like a backhanded compliment, but when the previous title was as solid as Returns, it’s really just an indication of fan service. If you liked the Wii entry, you’ll feel right at home.

As far as a story goes, viking invaders - or more accurately, a host of anthropomorphised animals, such as penguins, wearing horned helmets - have stormed into Kong’s idyllic sun-drenched island locale, hence the Tropical Freeze tag. This allows Retro to mix up the levels with some icier themes. There’s the usual procession of banana collecting on-land, fast paced mine-cart stages and the odd foray underwater. All the identifiably Kong features are present and correct.

There are a few additions though, the most notable being the partners you can pick up along the levels. Diddy Kong’s back, allowing you to hover, thanks to his jet pack, but alongside him in the character roster now sit both Dixie and Cranky Kong. The former uses her ponytail in a helicopter motion, which offers a quick updraft in levitation, whilst the latter uses his stick in a pogo fashion to get a bounce that also avoids ground hazards like spikes.You can team up with a pal and let them control your ally, or go it solo and simply make use of the companion character’s ability. The variation between Diddy and Dixie isn’t that pronounced in terms of how their abilities affect playing style, as both broadly offer further horizontal aerial travel. It’s Cranky that makes for the more interesting platforming, requiring a button press in the middle of a jump to send him back down to earth using his cane with a little acceleration. Stages that encompass both floating platforms and ground spikes give the less confident gamer something of a dilemma, and reinforce the importance of ally choice.

It’s the variety in levels that leads to the death-progress-death cycle. It’s to Retro’s credit that they’ve not followed the modern Mario angle of facilitating easy invincibility and minimising the challenge via power ups. Tropical Freeze often feels like its mechanics were dragged from a bygone era, with platforming unafraid to build levels with equal amounts of ground and perilous voids beneath you.

That isn’t to say that there aren’t ways to ease the frustration, Funky Kong’s shop has a wide range of things that can be bought to lessen the dangers facing you. These range from simple 1-Up balloons to equipable items that’ll save you from a fall or taking damage. They come in very handy when there’s a tricky section, as does the new Kong-Pow ability which can clear a screen of enemies, but they by no means make it a cake walk. The early stages are tough enough, and that’s before you factor in the boss battles.

Who cares if it's old or new! The routine of boss figures seems almost elongated in Tropical Freeze; just as you think you’ve bested one, they increase their speed, mix up their attack, or the scene in which the fight takes place changes in some way. The old rule of three which so often governs such figures in gaming - hit an eye three times, prepare for three boss incarnations etc - is absent, which gives each encounter a sense of a marathon rather than a sprint. Even when you’ve figured out what you have to do - which isn’t particularly tough - conserving your sparse supply of hearts remains at the forefront of your thoughts.

It’s only a pity that the boss battles bring into sharp contrast just how formulaic the rest of Tropical Freeze can be. It revels in its old school ethos, highlighting just how subjective rating a game like this can be. If you're not already in the fan club, and the first few levels don’t grab you, then there really isn’t much that will convince you. In light of how other platformers are evolving, the hope that there might be some inventive puzzle element or new wonder laying in wait soon dissipates. What you see is what you get, a fine looking Wii-esque platformer, brimming with aesthetic charm, that evokes a bygone era of challenging simplicity.


What you see is what you get, a fine looking Wii-esque platformer

Getting from A to B is never a case of finding the correct rhythm as in other titles of the genre. There’s no easy tempo for you to find to defeat a procession of enemies or traverse chasms, they’re intended to be overcome rather than an empowering series of heads to bounce off of in a 1-2-3 manner. It’s pure, simple, and depending on your viewpoint is either a brave choice - catering to a crowd whose numbers are diminishing - or the easy option for Retro.

In light of some other recent releases, such as Super Mario 3D World (a comparison that's unfitting, in more ways than one) the amount of stages may look meagre, and the collectibles and supposed secrets each level encompasses fairly low in number. What works in Tropical Freeze’s favour though is the challenge being greater to actually finding - and reaching - all the pieces of the jigsaws, for example. Collecting everything and opening up the new paths adds significantly more to a game that opts for fewer stages, but also far less filler material.

If you’re serious, the Time Attack option is where the real competition lies, and online leaderboards let you know just how far behind the curve you are. The ability for players to upload their run through means you can pick up some great pointers. These replays also emphasise just how polished the level design is. At normal speed, the enemy and obstacle placements look haphazard and deliberately awkward, but watching a master blasting his way through a stage without pause highlights just how precise - particularly the moving platform placement - they really are.

Tropical Freeze is everything you’d assume a Retro Studios Donkey Kong game would be: a polished, aesthetically pleasing bounce-along slice of fun that’s challenging without being unfair. It sticks to what it does well, and doesn't stray. If there’s a criticism of the gameplay, it’s that the blueprint for success is sometimes adhered to just a little too strictly, but that seems churlish. This was always intended to be unadulterated platforming, serving a fanbase.

If you’re looking for your gaming experiences to encompass some kind of evolution, then this title isn’t for you, it was never going to tinker with the Kong recipe. Once any thought of inventive GamePad usage was jettisoned, so was the prospect of Tropical Freeze being much more than a better looking Wii game on a new platform. Solid, fun, and all the things you’d enjoyed before; if it ain't broke...

Ultimately, how highly you rate Retro’s previous Kong outing will likely govern whether you see this as unevolving and playing safe, or a laudable example of fine-tuned staple mechanics served up without fuss.