Be afraid of the dark 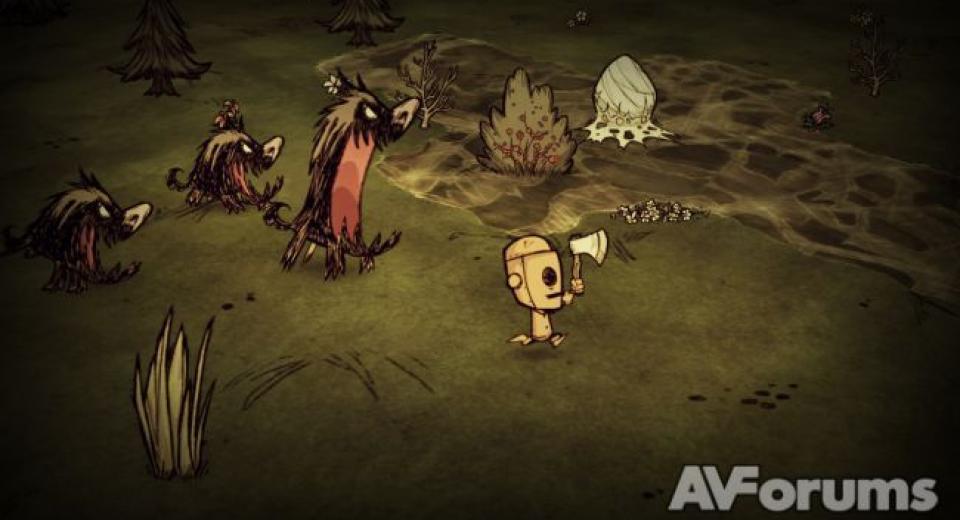 Looking back, I was so naive.

After a few in-game hours in the procedurally-generated paper cut-out world of Don’t Starve, my main concern was the lack of any real threat. I wandered around the landscape gathering grass and berries and leisurely trying to make sense of the unexplained menus and stats.

The day ticked on and dusk fell; I suppose I was lulled into a false sense of security. But there's something you learn quickly in Don’t Starve: Night is pitch black and darkness is a quick death. Minecraft’s nocturnal threats seem tame by comparison; a pair of eyes in the void followed by a couple of swipes from an unseen enemy and that was that.

Don't Starve had my attention, at least. I shut it down and fired it up from scratch, looking to glean some information about what I was supposed to do from the intro or main menu. Silhouettes on the character select screen suggested unlockable protagonists, but for now I had only Wilson and his mad-scientist hair. Back in the game, then. Roguelikes are notorious for - and perhaps even partially defined by - their lack of hand-holding, and the philosophy of 'learning through death'. Don’t Starve takes this to an extreme; there is no tutorial whatsoever. All I really knew so far was that my first priority had to be to find a light source before night fell so as not to repeat the failure of my first attempt.

Crafting basic tools in Don’t Starve is more straightforward than in Minecraft. Items that can be created are listed in the menus, along with the required components. If you’ve got the constituent parts, you’re a click away from having the crafted item.

A campfire and some berries got me through the first night. By now I’d worked out what two of the three HUD indicators meant: one was health (learned through my previous death), and the other was hunger. I subsequently learned that the third was sanity, the loss of which profoundly effects the game world in very cool and trippy ways. Don’t Starve is an apt name. The hunger indicator moves at an alarming rate; the odd carrot or a handful of petals won't cut it. I crafted some tools and a couple of animal traps and caught a rabbit. Eating it kept me going through the next day or two, but on the fourth night I disobeyed the game title’s single instruction.

In the same way as the unexpected nature of my first death taught me to ensure I always had a source of light, the pathetic nature of my second death taught me that the potential for finding food is always worth a detour. Don’t Starve excels at making the world technically survivable but inhospitable enough that the player is always vulnerable. This is most keenly felt if you survive long enough to see winter, and remains the case even when you later discover the means to ressurect yourself.

My third game ended when I stumbled across what appeared to be a community of pig people. I skirted around them for a bit, but they didn't approach me. I supposed one of their carcasses would yield a few generous portions of bacon, so when I spotted one who had wandered slightly further afield I attacked. I went from alive and in good shape to dead within fifteen seconds. Roguelikes, eh?

Perma-death is the masochistic draw for many fans of the genre, but in the case of Don't Starve it becomes an increasing issue with each restart. There’s just no way around the grind of the initial period, when you’re gathering the basics you’re going to need later on. Don’t Starve features progression after a fashion (it would spoil it to say too much on that subject), and losing everything can feel like a more substantial set-back than many players might like. Whether or not we will still be playing Don’t Starve in years to come depends on whether this issue can be addressed by the developer. As it stands, I think the hassle of the early game outweighs the interest of the later game. That said, the developers have been releasing regular updates and there’s every reason to believe they will address some of the issues over the coming months.

Don’t Starve’s main strength is its cunning blend of whimsical presentation and fearsomely unforgiving gameplay. For that alone it’s worth exploring the world Klei Entertainment have created, but at present there’s not quite enough substance to recommend it unreservedly.

Don't Starve is described by the developers as "an uncompromising wilderness survival game full of science & magic", which is as good a summary as any. Its unwillingness to compromise is both its strength and its weakness. Once you become familiar with the game's underlying systems, retreading the steps you've been through dozens of times before begins to lose appeal. That said, if you can pick it up for a reasonable price you won't regret spending a few hours in Wilson and co's company - and Don't Starve's continuing development suggests there are refinements still to come.