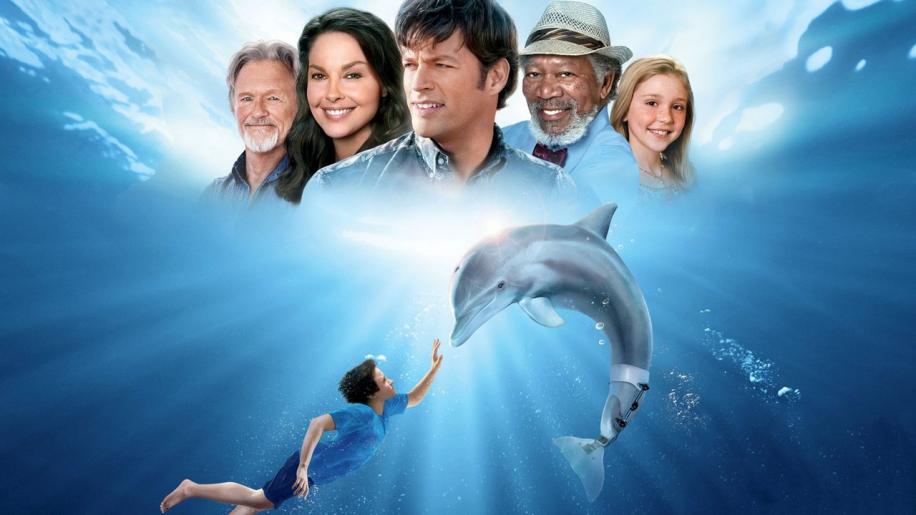 Every now and then a film comes along that surprises you, perhaps because it wasn’t what you were expecting or perhaps because it wasn’t heavily marketed - Dolphin Tale falls a little into both categories. Unless you’re American you might not be familiar with the story of Winter, the bottlenose dolphin who lost her tail but survived against the odds to become a symbol of hope for disabled children and wounded veterans across the world. As a result the film wasn’t heavily marketed in the UK and quickly slipped through its theatrical window and onto home video.

So it was with almost no foreknowledge or expectation that we slipped the 3D Blu-ray into the player to watch Dolphin Tale, only to be presented with the kind of feel good family drama that you don’t see so much these days. That isn’t a criticism at all and after having to sit through the utterly execrable Horrible Henry recently, it was great to be able to watch a film that, whilst aimed at children, the whole family could enjoy.

The film is based on the true story of Winter, a bottlenose dolphin who was found washed up on a beach with her tail entangled in a rope attached to a crab net. Despite the efforts of the staff at the Clearwater Marine Aquarium where Winter was taken, they were unable to save the tail and eventually it fell off. Initially it was thought Winter would be unable to survive but she found a way to swim by moving the back part of her body from side to side. Unfortunately because this movement was unnatural for a dolphin, it resulted in muscle build-up that was putting pressure on her spinal column. To prevent permanent damage, a team of experts worked for over a year to develop a prosthetic tail that they could actually attach to Winter. Designing the prosthetic was hard enough but finding a way of attaching it to the smooth and highly sensitive skin of a dolphin was the really hard part. The team eventually cracked it using a sock made of a special gel that they put over Winter’s stump before attaching the prosthetic. This new material is actually called "WintersGel" and is now used to help provide comfort to human amputees who find their prosthetics irritating on their skin. As a result of the media coverage, Winter’s story has become a symbol of hope for disabled children across America and the rest of the world.

That’s the true story of Winter and it is covered to a reasonable degree in a featurette found in the extras. However Dolphin Tale is a film and not a documentary and as such it has taken the basic story of Winter and weaved it into a dramatic narrative. The film actually came under criticism for doing this but from a filmmaking perspective the changes make sense. First of all, since the film is aimed a kids, having two children as the main protagonists makes perfect sense. It also allows our hero, Sawyer, to be the one who finds Winter, thus creating a bond between the two. In addition, since Sawyer is an outsider to the aquarium and knows nothing of dolphins, as such he represents the audience and as he learns, so do we. Sawyer also has a close relative who is in the military and this plot point serves to tie Winter’s struggle to the plight of wounded veterans. Some of the other changes are largely cinematic, Winter was actually found in December, hence her name but the film takes place over the summer holidays to better show off the Florida locations. Winter’s tail actually fell off over a period of months but clearly it is more dramatic to have to amputate due to infection. It took over a year to develop Winter’s prosthetic tail and gel but this is condensed into a few weeks, again for dramatic effect and to ensure that the entire story takes place during the summer vacation. In the film the Clearwater Marine Aquarium is in financial trouble and threatened with closure but again this never happened to the real aquarium.

The cast are an eclectic mix but all seem well suited to their roles, with the two child actors actually giving very good performances; Sawyer is played by Nathan Gamble and Hazel is played by newcomer Cozi Zuehlsdorff (try saying that three times fast). The part of Sawyer’s mother is played by the always reliable Ashley Judd and Harry Connick Jr. brings his easy charm to the part of Hazel’s dad, who also runs the aquarium. Kris Kristofferson pops up as Hazel’s grandfather to dispense some home-spun wisdom and Morgan Freeman brings his usual integrity to the part of Dr. McCarthy, the man who develops the prosthetic tail and gel. In reality Dr. McCarthy is a white Irishman but based upon interviews in the extras, it seems he was tickled pink to be played by Freeman. The real star of the film, however, is Winter who plays herself in the movie, which is a relief based upon how fake the CG dolphins in the opening credit sequence look.

The film was directed by Charles Martin Smith, who is probably better known as an actor, he was in The Untouchables and famously played ‘Terry the Toad’ in American Graffiti. Smith has directed quite a few episodes of TV shows but only a handful of features, so its good to see that he acquits himself here, delivering a well made and very watchable movie. He is joined by an able crew and special mention must go to Mark Isham who delivers a great score, that tugs at the heart strings but never becomes schmaltzy. The only area of weakness is the special effects; there aren’t many of them but what there are do look pretty fake. Presumably it was due to budgetary constraints, the whole film only cost about $38 million, but the decision to open the film with an entirely CG sequence was probably a mistake. The aim was to show Winter in her natural habitat, having fun with her family before getting caught in the crab nets but unfortunately the CG dolphins don’t look very realistic, especially when compared to the real dolphins that are used later in the film. The filmmakers claim they didn’t want to film wild dolphins for conservational reasons but that’s never bothered David Attenbotough. There’s a couple of other effects shots that look a bit ropey, especially in 3D but overall this is a well made film.

The decision to shoot Dolphin Tale in 3D is a strange one, as the film is essentially a family drama but it just goes to show that when done right, 3D can enhance any film. Thankfully the film was shot in native 3D using camera rigs composed of twin Red One cameras and the results are wonderful. The cinematographer and the stereographer have carefully composed their shots to take full advantage of the added dimension and the set dressers make sure there are plenty of layers in the frame. Shooting in the water also benefits from the use of 3D, with floating particles giving the shots plenty of impact. The actors and other objects in the film have a solidity hat only comes from shooting in native 3D and whilst there are a few instances of negative parallax, this is a film that mostly uses positive parallax to create a sense of immersion. This results in a very natural 3D experience that really adds to the emotional impact of Dolphin Tale and makes you wish more dramas, or in fact any dramas, were shot in native 3D.

To a certain extent Dolphin Tale is exactly what the title suggests, a tale about a Dolphin’s tail, or rather lack of it. But of course it’s much more than that and by relying on a combination of old school filmmaking and modern techniques like 3D, the cast and crew have created a heart warming tale of hope. Winter’s struggle against adversity is the perfect metaphor for any disabled person’s experiences but especially all the amputees returning from Iraq and Afghanistan. However it’s the impact that Winter has on disabled children that will melt even the hardest heart, so it’s just as well that no one can see the tears behind those 3D glasses.