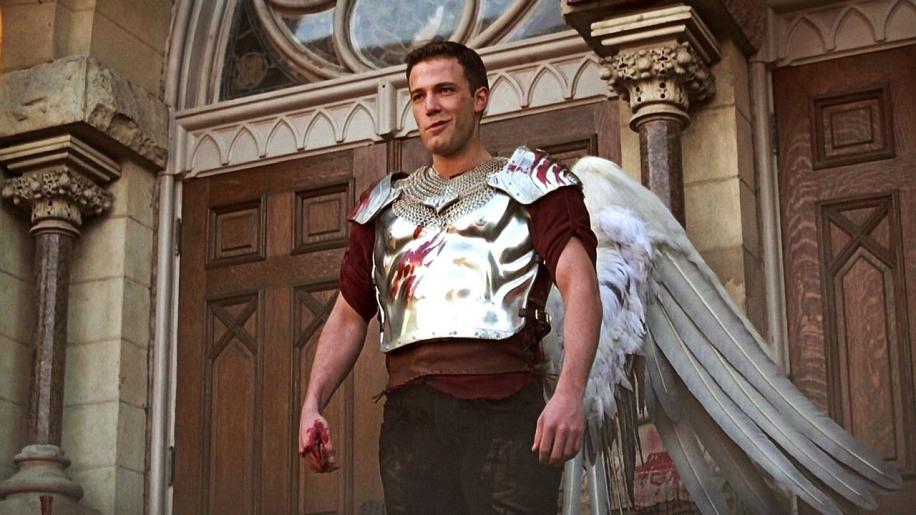 Before I start, let me say that I am a fan of Kevin Smith, way beyond his actual talents. I find the stories he tells fascinating, captivating and above all funny. Being such a fan is a double edged sword; I'll watch anything he produces, but I have high expectation.... My first introduction to his work was his first film, Clerks (1994), it was quirky, different and had me hungry for more. Next I saw Chasing Amy (1997) a film I still regard as his best to date. Then came to Dogma (1999) after which I found his DVD An Evening with Kevin Smith (2002). These collective works, although not complete, formed my basis for fandom. The latter two actually go hand in hand in my view because Smith talks candidly about the making of Dogma during Evening, revealing a spiritual side to his comic personality; he answers the questions fired at him with a depth, resonance and understanding that belie his infantile persona. Oh he's one to laugh at himself, believing that it's a film with a poop monster, yet astute enough to know what he was saying and able to communicate that to a possibly hostile audience. Hats off Kevin. Actually one of the first film scripts he wrote, pouring a lot of his heart and soul into it (much as Chasing Amy) he waited until he was a good enough film maker with a big enough budget to realise his vision. It was worth the wait.


The premise for Dogma is so simple it's genius. In the years before the millennium faith and belief in God are waning fast. In an effort to reinvent themselves the Catholic Church tries to appease to a hip generation, sacrificing the Crucifixion symbol for the 'Buddy Christ' and holding a rededication ceremony to absolve all sins just by walking under the arches and into the church. Bartleby (Ben Affleck) and Loki (Matt Damon) two fallen Angels want to use this loop hole to re-enter Heaven, but in doing so, their actions will prove God fallible and thus negate existence. Smith, here, neatly encapsulates a number of theological ideas underpinning them with modern idealism and commerce. There is still faith, there is a God and Heaven does exist; these principles are clear. However, religion, an organisation bent on control, is shown for what it is; even if it is lightly touched upon satirically, the message is the same; as Cardinal Glick (George Carlin) says 'It's all about bums on seats, catch 'em while they're young'. A damming statement when Rufus (Chris Rock) points out the similarity with smoking campaigners. Smith skilfully manages to keep the tone of the Church light when the point of the film is their interference (be it with the loop hole or Gods message) that cause all of mankind's ill will.

Smith sets the limits of good and evil between Bethany (Linda Fiorentino), the last Scion, and Azrael (Jason Lee) the dæmon respectively with all the shades of grey in between represented by all the other incidental characters. Just like life there are no absolutes, here all the characters signify differing facets of the human psyche, be they conscience (Rufus) or lust (Jay). Take, for example, Bartleby and Loki, essentially good angles, following orders as it were; their banishment may have been just but their desire to return home is also. Their theological discussions of such, Smith's way of battling his own inner dæmons, as well as their and mankind's place in the scheme of things is tinged with an overriding sense of being lost and wanting to return to the fold. Perhaps representative of regaining that lost faith. Their massacre at the end highlights the hypocrisy religion, that all can be forgiven if one repents, absolution is guaranteed; the end justifies the means and how many wars are lead in that name; how many are still occurring as I write....?

Smith argues and counter argues various points of religious dogma, bringing in his own passions and prejudices; Bible being written by men and the subjugation of women for example. But knowing anything said about any religion will always bring about controversy he lightens the mood by throwing in a crap dæmon! Unfortunately it didn't work; the religious fraternity was brought out to protest the film, instantly bringing about its cult status and another hilarious story from Smith who protested his own film. What was also highlighted about this story is that the protesters were making a judgement without even seeing the film and making up their own minds; but I guess being of that way inclined they've already done that.

Remember what I said in the first line? Well that comes very much into play now. The man can write. The man can perform. But the man has little talent when it comes to directing. His previous efforts are very much point at shoot, being dialogue heavy scripts (the point of the films) there was little invention needed. This showed up more in his second feature, Mallrats (1995), where his directing skill was woeful. Dogma, too, suffers a little, there is a lot more action and drive to this script compared to his other works; it needed a nippy cut. Unfortunately it did not receive one, being all rather pedestrian and continuing on the same 'point and shoot' route. Smith and his cast are well aware of this shortfall (listen to the commentaries) and some do equate this to the 'charm' of the View Askew films. Whilst I can see the argument I don't really agree with it ..... and yet, had it been given more edge would it have become less a 'Smith' film? Difficult to say. Personally I think it needed more edge; it is graphic enough, but uninspired in execution. However, Smith still manages to get the best from his cast. Taking all his regulars, plus a few bigger names he manages to keep tight reign on his script and get good performances from the ensemble. Smith tells the story that Jason Mewes learnt the entire script so as not to upset Alan Rickman, a professional actor!

Although I don't really like the phrase, Dogma is a film that splits opinion. Those that like Smith's work (like me) tend to favour it, others tend to not so. It is not as controversial as it is made out to be and in the intervening years since it release that controversy has arguably diminished. It still remains a highly personable film and one that does not try to preach, but still containing enough of a message should you wish to read one.