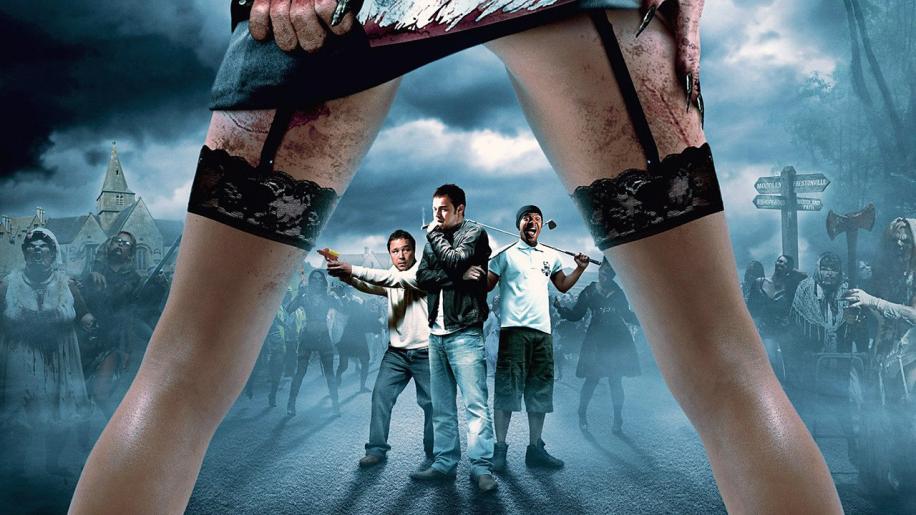 Earlier this year, Lesbian Vampire Killers was the comedy horror film that gained all the hype. Released alongside it, but being virtually ignored, was Doghouse. Very similar in ideas, but ramping up the blood and gore far enough to gain an 18 rating - the film was not a box office success. However, I would venture to say that a film like this is never going to set the cinema world alight. The target market is the home - DVD and Blu ray. So, does the film have what it takes to earn a place in your collection?

Well, the plot isn't exactly original. Basically, a group of laddish blokes head off to a remote village in the country in order to help one of their friends get over his imminent relationship breakdown. Once they get there, however, they discover that the army have been testing super secret viruses. This one has mysteriously turned all the local women into mad zombies who then go around killing off all the blokes. Thus, a new twist is added to the zombie genre - the battle is to be fought out within the confines of the battle of the sexes.

When the review disc was pitched to me, I was simply told that it was a zombie flick starring Danny Dyer. Danny is not an actor I have ever seen before, but he is one whose reputation went before him. Even my most unreconstructed male mates regard Dyer's onscreen personality as a step too far. I was intrigued to see just how bad the movie was. I was therefore immensely surprised as the opening scenes played out, and I was introduced to the characters. Dyer is immediately in full flow, revealing a cockney rich wide boy, treating his woman with an easy arrogant contempt. But then Noel Clarke turns up. Clarke is an up and coming darling of British Cinema, making a name for himself as an actor and director of note - as well as appearing in Doctor Who. He is then swiftly followed onto the screen by Stephen Graham. Graham to me is one of the most interesting actors working on the screen today. He deserves much more recognition for his work in material such as This Is England and Occupation (the latter a particular tour de force). My interest in this film suddenly rose. Maybe there was potential here to rise above its pulpy origins.

And that is the nub of the film's aims. Jake West, the director, is interested in taking a film that on the surface satisfies the usual Saturday night beer and pizza gathering of young twenty something males looking for a cheap movie fix, but at the same time introduces a subversive layer underneath this for those who care to look. He aims to do this by using actors who obviously have some depth to their performances alongside Dyer, and poking fun at their characters in subtle ways.

Thus, the cocky Dyer who's mantra throughout the movie about women loving him ends up as live bait - and when one character wonders aloud whether they should be slaughtering the zombirds he is told “this is not the time to stop objectifying women”. The horror may definitely come from the women, but the joke is most definitely on the men. And that is what makes this film stand out above what it could have been.

The direction is most definitely assured and kinetic. West finds interesting ways to move his camera, and interesting angles to move what could have been a derivative film along at a breakneck pace. He shows a good aptitude in the edit suite, moving the whole film along at a consistent pace - allowing moments of exposition when needed but also choreographing the violence and action extremely well. And there is most certainly plenty of violence here. It is not the kind of violence likely to disturb - it is far too slapstick for that. But there is certainly plenty of blood and grue spurting here.

Amongst all the mayhem, the actors are hardly required to put in performances of emotion and depth. But what is plain on screen is the chemistry within the group. I have mentioned Dyer, Clarke, and Graham in particular, but all the actors really do seem to work well together. This is a true ensemble piece and the actors display good camaraderie. They manage to sell you the rather silly plot, and the fun they are clearly having is infectious, leaping off the screen.

So, Doghouse is the kind of movie that is perfectly suited for a Saturday night's undemanding viewing. It provides you with 90 minutes of solid entertainment. It is never going to win any awards, but it is well directed, never outstays its welcome, and has a nice dry sense of humour beneath the mayhem. The beauty is that the subtext criticising these blokes is there if you want it. You can either take it on this level, or simply as a comedic slice of gory mayhem. However you approach it, though, it will go down very well with a group of mates, a pizza, and a few cans.