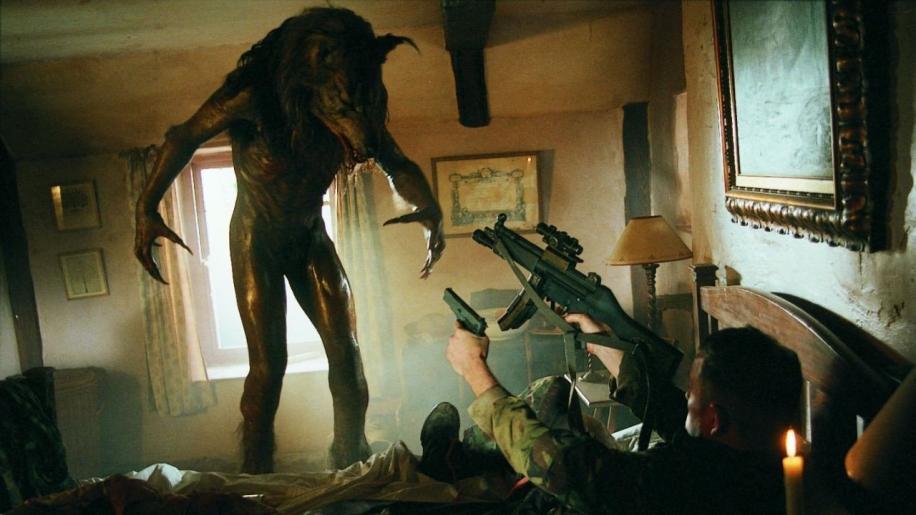 I have a lovely dog called Cassie. She's a lively little thing and friendly as a fluffy rabbit. I say “little” in so much that a German Shepherd Dog can be called “little” and rabbits are actually quite vicious because they are wild animals. Cassie, like the rabbit, has her moments - there is a flash of that old wild nature. Dog Soldiers is about the violent balls of teeth, claw and spit part of a dog's persona, rather than an offbeat paramilitary arm of Crufts.

Helmed by fellow northerner Neil Marshal, Dog Soldiers is a truly great movie, mixing the horror of werewolves, the creepiness of the deep forest and a surprising turn of comedy. In fact it's best to consider Dog Soldiers a comedy in order to get the best from the movie because as a straight horror movie Dog Soldiers doesn't work that well. But, I get ahead of myself, as this is the traditional point where the plot is to be described thus: A group of armed soldiers, led by Sean Pertwee's character Sgt. Harry G. Wells (ho ho!), are dropped off in a Scottish forest on a training exercise against Special Forces. Those Special Forces are decimated by something who in turn tries to decimate the poor army lads. Can they win against the wily wild wolves of the wood or are the lads doomed to a dire and dreadful decimation on a damned mission of destruction?

As I said earlier, Dog Soldiers is to me a comedy horror much in the vein of Evil Dead 2. In fact, Dog Soldiers owes a great deal to Raimi's masterpiece not in the least the whole ambience of the movie. The sense of desolation, that there really in no one around for four hours in all directions is complete and utterly believable. As is the notion that the house the soldiers find themselves in isn't the best in terms of protection, again borrowing from Evil Dead. There is even a character called Bruce Campbell...

What Dog soldiers does offer over the evil dead series, apart from Geordie accented grunts, is a human antagonist in the form of Capt. Ryan (Liam Cunningham), the only survivor of the special forces team. Ryan is badly injured and needs medical assistance from the people he was supposed to be fighting against. Suspicions arise when tranquiliser darts and nets are found rather than guns and blank ammo. When questioned in his delirious state, Ryan talks of insurmountable odds and that death is certain until Wells tells him to “stop spooking the lads”. Pertwee offers Wells a suitably gravely voiced focus for the younger soldiers, at once appearing to be a leader of men and also contrasting well with Liam's RP inflected aloofness. Dog soldiers is filmed like a fly on the wall documentary so it is just as well that the other actors play their roles with a fresh natural poise rather than an overly polished Hollywood-esque sense of artifice. The effect is that the younger soldiers appear to be less experienced because their acting is (on purpose I assume) given the impression immaturity.
One movie that has perhaps influenced Dog Soldiers, but isn't mentioned in the normal 'net haunts, is Jaws. We rarely get to see the actual werewolves in the flesh, so to speak, the director wisely using smoke and mirrors to obfuscate the really quite unrealistic antagonists. It is left to the actors to convey a sense of terror to the audience, a task that is handled very well, especially from the younger soldiers. Look out for a scene where someone is sent out to the barn necessitating a long-ish run in the open.

One other thing that adds to the tension is the guts. Oh yes, there are guts aplenty, here. At one point, Sgt Well's gets his stomach sliced open with all the viscera associated with that misfortune. After complaining that the guts “...won't all fit back in.” said guts are scooped into a helmet and carried to shelter, where a small terrier tries to make off with poor Sgt Well's spleen. Told you it was a comedy, but these devices, rather than blunt the horror of the movie, supplement them in such a way as to make Dog soldiers a great success. All such compliments brings me to the bits that aren't too good; the bits when they are in the house. Like Shaun of the Dead, Dog Soldiers is almost a different movie in its third act. While there are some interesting things going on, and some wonderful comedy (look out for the Sgt's knockout scene) things just don't hang too well. There is a hesitancy making me thing that these latter scenes could have been shortened somehow to improve the narrative flow. It is also the part when you see most of the werewolves themselves which, once revealed, aren't nearly as scary as you'd think.

Still, this is one of the most effective horror comedies and certainly the best werewolf movie in recent memory. As such it comes heartily recommended.