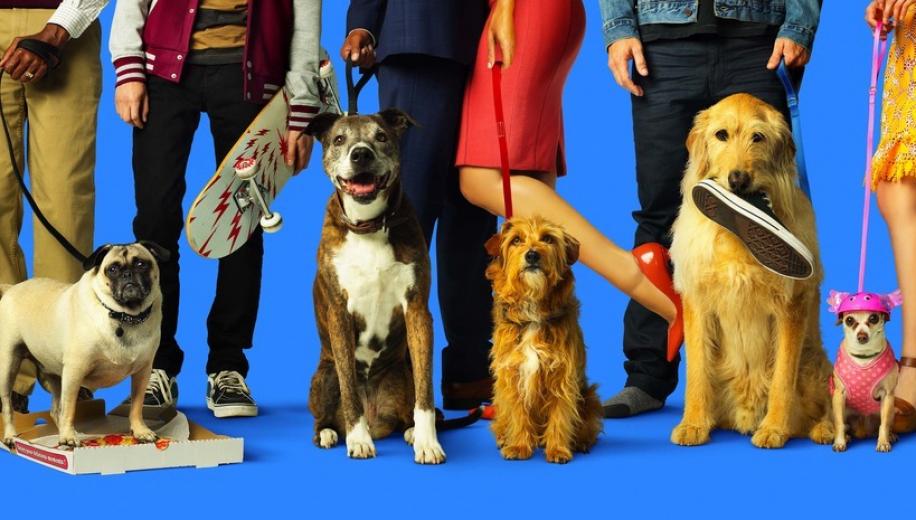 Tracking a broad group of hapless individuals - a talk show host on a downward spiral after the end of her last relationship; a kindly but goofy guy who tries to get the attention of the pretty coffee shop girl who is more interested in the handsome vet surgeon that always get her name wrong; a pizza delivery boy who upsets the wrong old man; and an unreliable brother who is called upon to help out when his pregnant sister goes into labour and leaves him in charge of their beloved dog - Dog Days is formulaic, (largely) family-friendly fun.

There's nothing here that hasn't been done a dozen times before, often better, but it attempts to put a fresh spin on the proceedings by introducing a key dog in the lives of every character within - with even some of the dogs sparking together as their owners share the chemistry of an unlikely meeting in the park.

It's hardly got the big-name cast of some of its more mainstream counterparts, instead subsisting as almost a polished DTV-alternative, utilising the likes of Nina Dobrev (XXX: The Return of Xander Cage, Flatliners), Eva Longoria (Desperate Housewives), Vanessa Hudgens (Spring Breakers, Sucker Punch), Adam Pally (The Mindy Project), stand up comic Tone Bell, Stranger Things and It child star Finn Wolfhard, and Luke Cage regular Ron Cephas Jones. If you watch enough movies and TV shows, they are all familiar faces, committing to the blended narrative with aplomb; giving each mini-skit their all as they orbit each others' worlds getting tangled up in the leads of their pet poodles.

There's some nice sentiment here, and they do well to make a case for convincing chemistry between even the most unlikely of pairs: Vanessa Hudgens and Jon Bass - who was terrible in Baywatch (where he shared a similarly sweet unlikely pairing with Kelly Rohrbach), but tolerable in Molly's Game. The cover art and title are a tiny bit misleading - perhaps putting some people off, whilst dog-lovers may feel underwhelmed - as the dogs are an important gimmick for how the characters are drawn together, but they are largely just a gimmick, however this is still a perfectly watchable little family flick.

Icon Entertainment brings Dog Days to UK shores with a Region B-locked Blu-ray and a strong 1080p/AVC-encoded High Definition video presentation framed in the movie's original aspect ratio of 2.4:1 widescreen. It's a fine looking modern production, as glossy as you would expect.


A fine looking modern production, as glossy as you would expect.

Detail remains well rendered throughout, picking up on clothing textures, skin nuances and broader environmental features within the relatively commonplace apartment/park settings that dominate. There's little in the way of softness - a likely digitally-shot production from 2018, it's hard to get it wrong these days - and certainly no obvious digital defects. The colour scheme is rich and vibrant, afforded plenty of gorgeous greens and colourful clothing choices, with decent blacks to offer a backbone to the proceedings.

The accompanying DTS-HD Master Audio 5.1 track is also an unsurprisingly polished and strong piece of work, held back perhaps only due to the relative lack of natural oomph afforded by the narrative itself, but still prepared to go above and beyond to deliver the animal antics and relationship woes with aplomb.


A strong track which is perfectly faithful to the material.

Dialogue is key, given clarity across the frontal array, with effects lapping up everything from the dog-related noise to street traffic sounds, news studio direction, cafe hubbub and the likes - and hardly expanding out from this but for a couple of brief moments of more boisterous action, like the live jamming session at the beginning, which is an aural high point. The score similarly tries its best to engage, given good coverage across the surrounds, and rounding off a strong, at times even very good, but hardly demo worthy track which is perfectly faithful to the material.

Nothing but previews on startup.

It's a harmless, largely family-friendly film, which will suit fans of this kind of sub-genre.

Dog Days, perhaps unlike this year's earlier Show Dogs, isn't quite as dog-centric as you might expect, instead using these canine colleagues to add a USP to the otherwise pretty standard multi-stranded tale of disparate characters that get into relationship highs and lows. It's a harmless, largely family-friendly film, which will suit fans of this kind of sub-genre and particularly interest those who are animal-lovers.

The Blu-ray release affords the 2018 production slick video and strong audio, and zero extras (unsurprisingly) remaining a solid purchase for fans to enjoy.