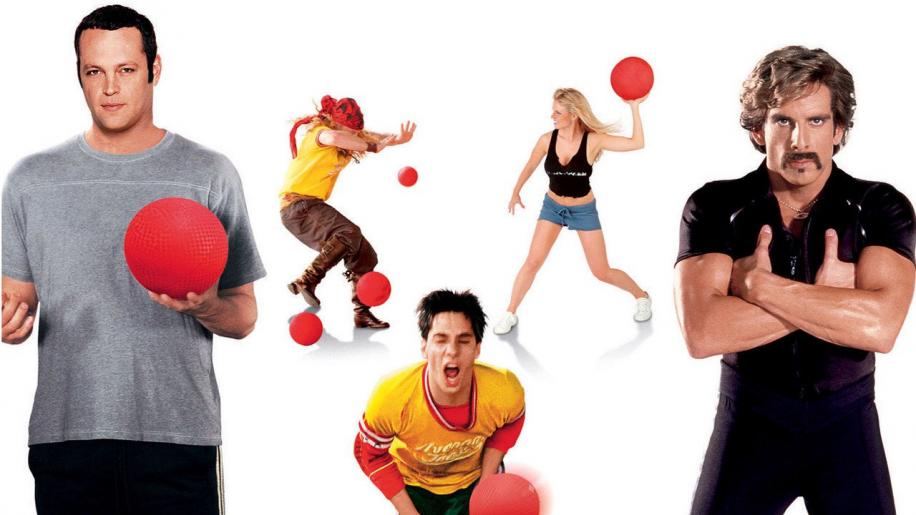 Comedy is a fickly beast. Unlike drama or tragedy or even action where the limits are clearly defined, what makes us laugh is down to individual taste. More than that it is true to say cultural differences between nations spawn differences within the comedy genre, it's why some comedic films so prolific in their native country often fail at the worldwide box office. Thankfully though, there does seem to be one universal comedy standard; slapstick. Watching people fall and hurt themselves is funny (why those camcorder programs are so successful), moreover watching people get hit by stuff is also funny (why cartoons are so successful) and that, ladies and gentlemen, is why Dodgeball can translate to a worldwide release.

Rawson Marshall Thurber's directorial debut tells the story of two gyms; Globo Gym lead by White Goodman (Ben Stiller) is a stark corporate operation insistent that 'you' are unfit and ugly and it's 'your own fault' as 'they are better than you' (and know it) so they can whip 'you' into shape. Average Joe's, lead by Peter LaFleur, (Vince Vaughn) is the complete opposite being friendly, relaxed and personal. The style of gym is indicative of the owners nature, Goodman is hard, ruthless and unlikeable; LaFleur friendly and charming. Goodman wants to level Average Joe's into a parking lot, not as a businessman removing competition, but because he despises LaFleur and his clientele. Needing $50,000 within thirty days to save the gym from closure Joe's band of loyal clientele band together and persuade LaFleur to from a dodgeball team to compete in the American Dogeball Association of America's nation competition that coincidently is offering that exact amount as prize money. So the stage is set for a show down, and also endless comedic possibilities. The plot is stuff of a thousand sport/competition movies, and as such there is nothing particularly original on display, but playing the entire film for laughs and never taking itself seriously the film reminds me of the Airplane spoofs.

There is some serious talent on show too, as well as a myriad of cameo's. Stiller and Vaughn give exceptional performances, both achieve their characters with ease imbuing each with the qualities needed to give the audience the necessary love/hate feelings needed for the film to succeed. Average Joe's characters too are well rounded, and even with the many back stories filmed but excised due to pacing, help to from the team to a coherent whole, you feel for them. Special mention to Christine Taylor playing Kate the lawyer employed by the bank to over see the mortgage situation; aside from looking incredible against the men she brings a sense of natural comedy to the scenes she shares with Stiller (her real life husband). Rip Torn too as the grizzled wheelchair bound Patches O'Houlihan ex-dodgeball champion, not only has he most memorable lines, his training schedule is perhaps the funniest montage of the film. The cameos too are well thought out, unexpected and just plane funny.

All sounds great doesn't it, and certainly when I watched it with my kids they had a whale of a time with it. Even though I laughed along with them and am mature enough to see all the jokes, after the credits had rolled I wasn't left with the feeling that I'd just seen a comedy classic. Sure there are moments of hilarity, and each scene is played to full comic potential; and here is where, for me, taste comes in. Whist the slapstick comedy is universal, other parts felt flat or as if the makers were trying too hard. Personally I would have liked some more pathos thus giving the hilarity somewhere to peak. Dodgeball is a very enjoyable film with many great moments; best comedy of 2004? Maybe. Comedy classic? No.