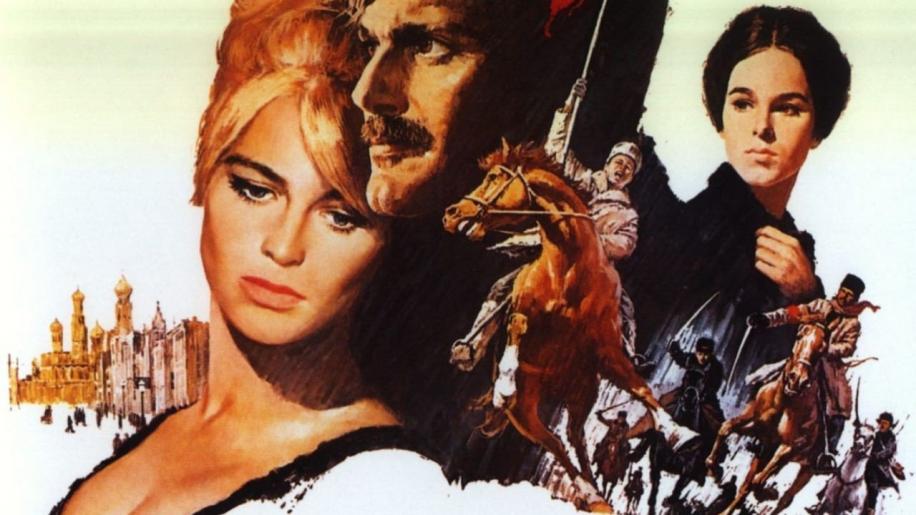 My childhood test of a true epic movie was whether, in the Cinema, it started with an Overture or Play In music and was of sufficient length to warrant an Intermission (that's a break half way, for the yoof of today) when uniformed Usherettes would walk down the aisles to sell tubs of ice cream and choc ices. Then the Entr'acte music played before the second half began. This was a common event in Cinemas in the 1960's but is seldom, if ever, seen today. It was all part of the experience of going to the Pictures in those days - a very grand occasion.

Happily David Lean's film of 'Doctor Zhivago', now out on UK Region free Blu-ray in a 45th Anniversary Edition, comes with its Overture, Intermission and Entr'acte music intact but there are many other things that make it an epic.

This film has so many striking scenes that linger in the memory. The bleak funeral scene, strikingly photographed in widescreen 2.40:1 by Director of Photography Freddie Young and is so effective that you feel cold just watching it. The shear beauty of Geraldine Chaplin as she arrives on the train in her pink fluffy hat. The bands of light used across Julie Christie's and Omar Sharif's eyes in close ups. The shot where a candle melts the ice on a window to allow us to see the tableau inside. The many sweeping vistas that greet the eye. The protest massacre scene where, instead of showing us the Hussars cutting down the demonstrators, Lean kept the camera on Sharif's face and allowed the horror of the event be played out in his reactions - these are just some of the lingering memories that have stayed with me for over 40 years.

The skill of David Lean as a director came from the many years he spent as a film editor and, very often, he would be called upon to 'save' a film at the edit stage that another less talented person had directed. Surely there can't be many people who are unaware of his other work - 'Great Expectations', 'Brief Encounter', 'Lawrence of Arabia', 'The Bridge on the River Kwai' and 'A Passage to India' being just a few examples. These are all very special films. He had the gift of being a good storyteller - something that many modern day directors lack and to cover this up they fall back on the use of CGI effects and flashy photography. He once described the role of a director as 'a tickling of talents' meaning that they should do what is necessary to get the best out of others - whether it be cast or crew.

Anyone watching 'Doctor Zhivago' can't fail to go 'Wow!' at the opening shots and at many of the other images mentioned earlier. These are the things that a director adds to a great story. Essentially it's a complicated love story that involves a young Yuri Zhivago (Omar Sharif) with Lara (Julie Christie) who is also in love with her young revolutionary Pasha (Tom Courtney) who is in turn in love with his ideals. It's further complicated by the fact that Yuri is also in love with his wife, played by Geraldine Chaplin. Paint this against a backdrop of War followed by a Bolshevik revolution in Russia and you have an involving tale that holds an audience spellbound for the full three hours and twenty minutes running time.

Interestingly, this isn't a film about performances as much as it is about the story. Omar Sharif reacts to the situations and people he meets. Indeed, he was told by Lean to 'do nothing' which almost caused him to have a nervous breakdown as he'd heard comments about the performances of his co-stars from those who came back from viewing the rushes each day - but nothing about his. Lean told Sharif to trust his judgement and that when the film was over everyone would come away thinking about him. A true leap of faith for any actor and one that could have potentially ended his career. While Julie Christie is beautiful and Lean made much use of her blue eyes in close-ups, she too is secondary to the story and seems to drift along - much as many do in real life.
The only person who seemed to employ every acting trick in the book (real scenery chewing) was Rod Steiger as the lecherous Komarovsky. His performance is strong as demanded by his character and the audience dislikes him - indeed they cheer Lara on when she attempts to kill him in the restaurant scene.

Taken from the book by Boris Pasternak, who was forced to turn down the Pulitzer prize by his Russian masters, it is a sweeping tale that could only have been made into a screenplay by someone as gifted as Robert Bolt, who also scripted 'A Man For All Seasons'. Furthermore, it needed a director with an eye for detail like Lean to make it come alive on screen. It needed a director who would be left alone by the studio financing the picture to get on with it without constant interference.

'Doctor Zhivago' would probably not have been such a mass market hit had it not been for Maurice Jarre's haunting theme - which has been played regularly since the 1960's and still can conjure up the emotions and images of the movie today. It's a beautiful piece of music which uses the balalaika to great scene setting effect. When it came to recording the score, nobody seemed to play the instrument so Jarre had to go to the Hollywood Greek Orthodox church on a Sunday and ask.

This is a film of real quality that I have probably seen about 7 times, but each time I watch it, I'm captivated by its beauty and I see something new. Its release on Blu-ray now means that a new generation has the chance to see it in all its High Def glory.
Take the time to appreciate the work of a proper director.