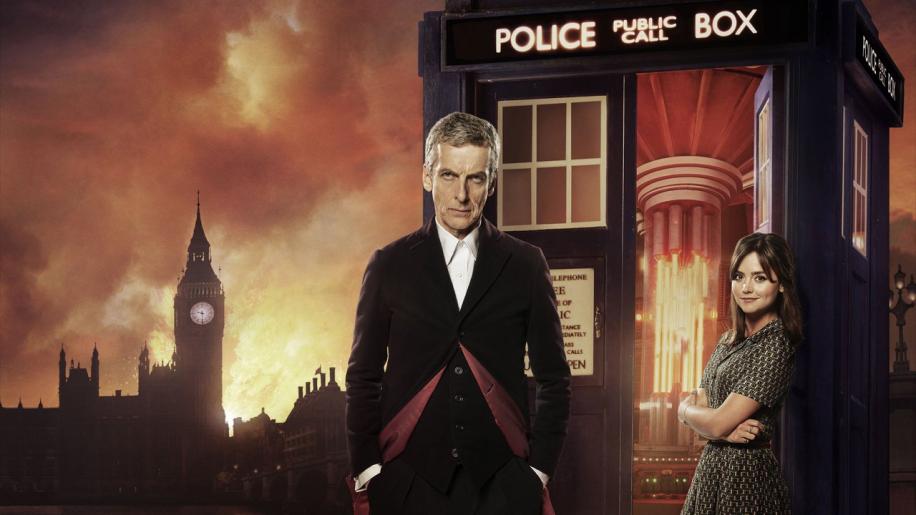 With a bit more attention paid to the transfer than last time around, some of the episodes here appear startlingly clear, sharp and colourful. Presented in anamorphic 1.78:1, each episode boasts an extraordinary depth of colour and a level of detail that can often be gobsmacking. I viewed these discs upscaled to 1080i via Denon 1730 and then thrown across a 52 inch LCD screen, and they looked absolutely amazing. In fact, I would have to say that, for the most part, I was blown away by the image served up. There was a time when to mention that something had a TV show look about it meant that the picture was sub-par, washed-out, soft and murky. Well, that sentiment simply does not hold up any longer, with high-gloss shows like 24, Lost, Deadwood and Prison Break producing consistently top-quality movie-like transfers. And, to be honest - and very happily so - I might even go so far as to say that Doctor Who actually trounces them quite thoroughly with this collection. Some episodes may look a little softer than others, but this is down to the aesthetic choices made by the show's creators and not by their transfer to disc.

Black levels are incredibly deep and solid, ensuring a totally convincing contrast to the myriad of bright colours frequently splashed about the screen. Edges are smartly delineated with nary enhancement to spoil the view, and skin tones are very warm and naturalistic. Colours, on the whole, are splendidly captured with stability, eye-embracing vitality and absolutely no hint of smearing or over-saturation. From the gleam of a Cyberman's chrome chassis to the hypnotic green glows issuing forth from the computer screens in the Krillitane-governed school, the discs hold every type of colour and hue with ease and provide a palette with infinite rewards. Even the blazing white-outs during much of the climactic episode - vast trans-dimensional portals and Daz-bright walls combining to engulf the screen like a harsh electro-blizzard - are handled effortlessly and without fuzzing, glitching or smears of that horizontal tracing that can so often be leaked out. But where these transfers really come into their own are with the level of detail they offer. Standard discs they may be, but the sheer plethora of finite information packed with clarity into every frame is nothing short of astonishing. A quick rundown of the delights to be found throws up many sharply etched images - the clockwork baddies and opulent furnishings from The Girl In The Fireplace; the fur and fangs of the werewolf in Tooth And Claw; the awesome sight of amassed Cybermen looming out of the night; the fire and brimstone visage of the Beast and its lair-cum-prison in The Satan Pit; and, of course, the chaotic and colourful swirl of Daleks and Cybermen being dragged back into the void.

Oh, and have a little look for the lengthy strand of Tennant's hair swinging about on its own at the back of his neck during the emotional beach finale. And, whilst on the topic of things to look out for, check out the rogue foot of a production assistant that strays into the shot behind the Landrover during the same scene. The 5.1 mix is superb. Let me point out here and now that I made a gaff on a recent podcast when I stated that I found it somewhat lacking. Quite clearly I was talking out of my backside, folks - and I can only assume that in my haste to enjoy Tooth And Claw I had failed to engage amp and just listened to it through the TV's own speakers (!) - because the soundmix presented right across the set is spectacular. This season was surely designed with surround sound in mind, and each episode boasts great dynamics and enjoys effects that zing and zip around the full speaker set-up with smart steerage, plenty of LFE boost, a wide and energetic soundfield and impeccable delivery of all audio elements.

The surrounds have lots of things to occupy them, from a werewolf growling and snarling its way around your lounge and bullets pinging wildly off the armour of the Cybermen whilst Dalek laser-bolts lash around in all directions, to the Beast cavorting around inside the Satan Pit and numerous Tardis whooshes, explosions and dimensional portals opening and closing. This is top quality, folks, and far more impressively put together than many big budget action extravaganzas of late. All episodes feature commentary tracks, five of which actually having the honour of In-vision visual chat-tracks that slot the participants into a little skewed box into the lower corner of the image. The commentaries are all worth listening to, full of production detail and offering some fascinating insight into the stories and their genesis. Enthusiasm is definitely the order of the day, with everybody tumbling over themselves to deliver their reminiscences. In fact, quite a few of them border on being fan-boy raves but, since I am one, myself, I can find nothing wrong with that. Sadly, there is no input from either Elizabeth Sladen or Peter Kay, but Tennant appears on five tracks, Piper on only one, Camille Coduri gets two - though unfortunately not a visual one (d'oh!) - and Davies speaks out on two whilst Julie Gardner graces five. Throughout the lot the writers and directors have their say as well, and the end result is fact-packed and full of laughs. Tennant and Piper cover the final episode Doomsday in a visual chat, though neither seem to notice the stray foot that appears behind the Landrover.

The Deleted Scenes, on Disc 1, last for 16.30 mins, but don't really add a great deal to what we've seen already in the finished episodes. However, it is worth looking out for the scene where Mickey finds out the true nature of parallel world alter-ego of Ricky - a real eye-opener that Russell Davies couldn't resist putting in ... and then, obviously, pulling out again.

The Outtakes are much more fun. Lasting around 8.20 mins and, again, found on Disc 1, these goof-ups play much better when effects bods, The Mill, let their CG creations run amok in total luvvie mode - the werewolf preening himself before his scene is priceless. But the best bits are the surreal images of Cybermen playing football in the park and asking directions from innocent and vaguely bemused bystanders. It also goes to show just great and supple those costumes really are.

Also on the first disc is the 8-minute Children In Need special that fits perfectly between the end of the Series 1 finale and the beginning of The Christmas Invasions. It's a bit self-indulgent but, remember, this worked extremely well in the run-up to the new show commencing and the perfect teaser. Nice to see it here.

David Tennant's Video Diaries, which are to be found on Disc 6, go on for an amazing 85 mins, taking in such things as the new Doctor sitting down to watch his debut in The Christmas Invasions with his family and friends on the telly. It has a nice honest feel to it too, as it reveals the problems that often transpire whilst making a TV show - hitches and run-throughs, laughter and the boredom of waiting around for camera set-ups etc. Tennant also records such off-duty moments as switching on the Christmas Lights in Cardiff and appearing on that other great British instsitution, the Beeb's Blue Peter. On the other side of the coin, Billie Piper's Video Diaries, on Disc 1, run for a paltry 5 mins covering just the season's first block of episodes and, as a consequence, reveal nothing of any particular interest.

Then we get the cutdown versions of the BBC 3 behind-the-scenes documentaries Doctor Who Confidential, which can be found on Disc 6. Naturally, these go much deeper into the production of each episode and flesh out the package quite considerably.

So, to sum up then, Series 2 has some excellent extra features that delve successfully into the fun and sheer enthusiasm of putting the show together. Whether the end result turns out to be fantastic or just plain embarrassing, the new Doctor Who stories are always something that I look forward to. I suppose the dud episodes help make appreciation of the good ones all the sweeter. It's the Doctor Who gamble - the rough with the smooth. But, even so, these adventures are well worth collecting - some are fascinating, others enormously exciting, but all are part of one of sci-fi's most enduring institutions.

Series 2 benefits from some astonishingly crisp transfers and a 5.1 makeover that really delivers the goods. The disc quality alone is enough to warrant purchasing the set, but the addition of numerous entertaining commentaries and David Tennant's Video Diaries are the icing on the cake. Excellent value all round and totally recommended.