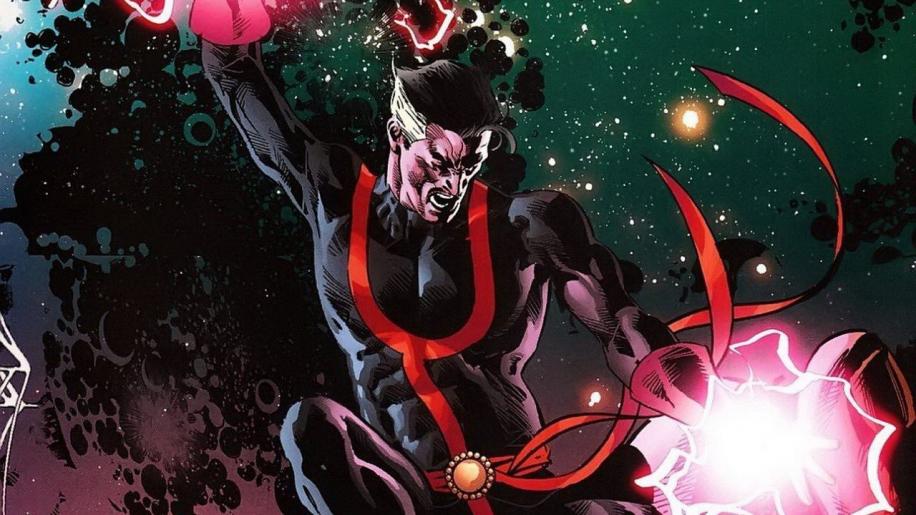 Following swiftly on from their Ultimate Avengers double-bill and the so far only SD release of The Invincible Iron Man, Marvel's new animated tangent is further bolstered by Doctor Strange's arrival on Blu-ray. These new feature-length productions have courted controversy from hard-line fans for some perceived departures from the accepted and cherished comic-book lore and for their sub-par animation, but they have been successful enough to garner new disciples and to prove that there is certainly a market for the lesser-loved superhero franchises languishing in the lower echelons of their catalogue.

Doctor Steven Strange (Bryce Johnson) may be a gifted surgeon but he has less than his fair share of humanity, acting for the most part like an automaton - cold and detached. After glimpsing a vision of a world hidden from most human eyes during an exciting demon-bashing prologue, Strange becomes known to a secretive cult of existential sorcerers - a band that have sworn to protect mankind from the evil machinations of an age-old entity called the Dread Dormammu who, day by day, gains a stronger foothold upon our dimension, sending forth more and more of his abominations to pave the way for his eventual coming. The fact that Strange could actually see them defeating a demon marks him out as possibly one of their kind - a fellow sorcerer. Fate being what it is with regards to superheroes-in-the-making, poor Dr Strange then suffers a mysterious and horrific car accident that ruins his hands and, naturally, destroys his promising career, leaving him no alternative but to take the advice of mysterious warrior-monk Wong (Paul Nakauchi) and head off to a mystical, and geometrically challenging, monastery in the wilds of Tibet where, with dedication, he can become “healed”. Here, under the tutelage of the wise old Ancient One (Michael Yuma), he begins to realise that there is a world beyond the one he knows and that the delicate balance between the forces of good and evil is set to break ... and that he has his own destiny to fulfil as Doctor Strange, practitioner of the dark arts and ultimate defender of humanity against all manner of beasts, aliens and hell-spawn.

“Stay in the light. They hunt in shadow ... and in great numbers.”

As is typical of the genre at large, much of this saga is entirely formulaic. But such an entrance into the weird universe of Marvel's most uncanny saviour is vital for newcomers and, much as the writers did with Tony Stark in The Invincible Iron Man (who shares the same moustachioed and angular look as Doctor Strange), a lot of the screentime is devoted to his genesis and evolution into the esteemed sorcerer. Always one of the wackiest and most off-the-wall comic pitches, Doctor Strange really only ever had a select and, appropriately, cultish following. He was a child of the sixties - his peak-collared cloak, cool silver highlights, hip amulet and billowing sleeves entrenching him firmly in the California lounge-lizard, smooth-soiree-set. His esoteric practices and penchant for arcane-phrased gobbledygook notwithstanding, Doctor Strange was the type of well-heeled playboy who could throw wild swinging parties at his trendy New Age mansion, his attitude and style the purest and most baroque form of metaphysical hedonism. It was unlikely that those who read and loved Spider-Man, The X-Men and The Avengers would also love the hippy-wizard with the Dracula cape. Personally, as a kid I used to read a fair bit of Doctor Strange - admittedly most often when he guest-appeared in one of the afore-mentioned comics - although, somewhat mystically, I can barely recall any of those stories now. I remember the strips being incredibly surreal and full of bizarre settings and characters, and that they were dripping with colour and vibrantly organic in style. Incidentally, the Star Trek Animated Series always used to me remind of Doctor Strange as it seemed to follow this dreamily exotic flavour with some of its alien landscapes, too. The appeal, for me, probably laid in the horror overtones of the story. But the only version of Strange's comic incarnation that I still have for any means of comparison is in the Marvel compendium Bring On The Bad Guys, which contains the 2-issue origin story of The Dread Dormammu, who features in this movie as the prime mover and shaker of villainy. And, to be honest, the film version captures virtually squat of the unique and mind-bending atmosphere of the book. But then, it doesn't need to.

Writers Greg Johnson and Craig Kyle have a difficult job to do in bringing the cloak-swishing, spell-casting icon into the present day and making him feel relevant. To their credit, they create a believable modern world that is oblivious to the demonic conflict raging all around them and place Strange's hard-nosed shell of a man convincingly into the heart of a moral dilemma that will drastically alter his life. They keep the pace pretty taut and toss in quite a few monstrous interludes whenever things threaten to become bogged down in exposition and spiritual edification. Dormammu's minions are plentiful and wild. Big, fang-mawed monstrosities rage through city-streets, scaling walls and hurling cars. Packs of ravenous wolf-creatures dwell in the park. A host of zombified children gravitate spookily towards the evil will of their master. But the best critters are the swarms of flying piranha that teem like a plague of locusts from out of the black satanic clouds, stripping innocent passers-by to the bone in seconds. Of course, the whole prophecy-caboodle has been done to death and the last-act extravaganza of the big baddie finally being revealed in all his flaming glory and not quite living up to expectations is thoroughly clichéd, but Doctor Strange still carries a very agreeable momentum and juggles its mysticism, action and character-development with wit and skill.

“You had me trek all the way to Tibet when you had a backdoor the whole time!”

The cast of characters called into play are colourful and visually involving, even if they do not, in some cases, have much to say. Wong is obviously a seasoned player and is considerably upped in attitude and skill from the comics. Pony-tailed man-mountain Mordo (Kevin Michael Richardson who voiced the Joker in The Batman) is good fun as the warrior with delusions of his own grandeur, becoming a nemesis for Strange without stinging too much of plot contrivance. Dormammu, himself, (voiced by Jonathan Adams) is a big, beautifully coloured ogre of light and flame, somewhat standardised for a demon-lord, I suppose, but certainly better-looking and more satanically intimidating than he appears in the origin comic that I've got. And the voice cast do a fine job of bringing their animated selves to life. The script is hardly any great shakes but the dialogue is much less cloying and patronising than you might have expected. Plus, there is some real heart and soul offered up, too, with the necessary inclusion of Strange's tragic backstory weaving in some delicate poignancy. One or two little throwaway reminisces that haunt the doctor are particularly affecting, which is nice and unexpected to find in an animated tale of the deliriously diabolical.

“You were a natural healer, Steven. But not all lives are destined to be saved.”

If the cold-hearted and arrogant Dr. Steven Strange is as acerbic and grating as Hugh Laurie's irascible House MD, then his training in the vertigo-inducing, trans-dimensional monastery perched high up a sliver of Tibetan rock is poached wholesale from Bale/Nolan's Batman Begins. A straggly-bearded Strange gets the hump with seemingly illogical exercises in wall-demolition, fatigue and soul-deprivation, unconscious of the fact that all this torment is actually developing his skills as a sorcerer. He only wants his hands to get better, unaware that his mental powers are increasing to a point at which his corporeal being should no longer matter. Whilst the Ancient One buffets him with quasi-elementalism and Morpheus-style altered perceptions, Wong and Mordo train him in an unusual form of esoteric martial arts. Indeed, the warrior-cum-wizards have a hard-line approach to battling demons, disappearing through portals to track down and defeat errant manifestations that have slipped through into the real world, using individualistic skills and magical powers in time-honoured superhero fashion. The camerawork does its best to make every scene vivid and filmic. Even close-ups have angles and lighting to enhance their mood and intensity. But the off-kilter framing of many longer shots is quite rewarding. From views of archaic and mysterious buildings and edifices, to the high ceilings adding atmosphere to the early hospital scenes, the film feels spacious and grand. The Tibetan sequences are possibly the best that Doctor Strange has to offer, with one terrific image showing the foolish and impatient trainee-wizard collapsing in the midst of a blizzard after storming away in a huff. The animation, as far as I am concerned, has improved with each feature that Marvel has produced. The influence of anime is even greater this time out, and the action is faster, more dynamic and much smoother.

“I am Doctor Strange - Sorcerer Supreme!”

Despite an unusual lead-character, Doctor Strange is still very typical superhero fare. An innocent man suffers some sort of pre-ordained trauma that will transform him into something far more powerful and, as a direct result, see him become far less self-centred and much more willing to act on behalf of the greater good. This particular saga, or rather its realisation in this introductory instalment mirrors that of Batman perhaps a little too closely. But, on the whole, this is spirited stuff and quite adult in tone. I really hadn't expected too much from it, especially considering that the previous entries in Marvel's animated series have hardly been sensational, yet Doctor Strange is just that little bit different from the run-of-the-mill heroic fare as to feel refreshing. Given time, this could develop into something really alternative and intriguing. The comics were unbridled in their use of imagination ... let's just hope that Doctor Strange's further animated house-calls follow suit.

Think Batman fused with Hellboy and dipped in a bubbling cauldron of Lovecraft and you won't go far wrong. Recommended.