Now that's what I call a reboot! 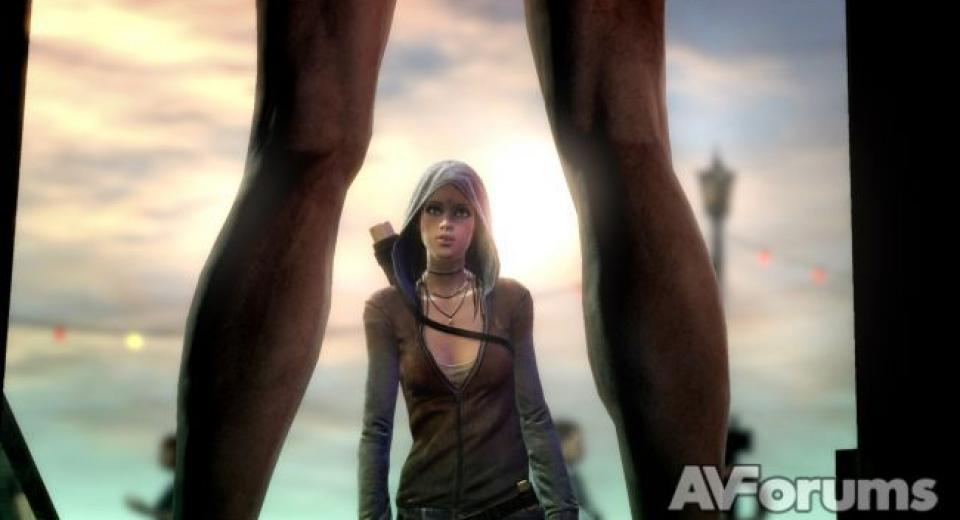 You could be forgiven for glossing over the Devil May Cry (DMC) series, controlling like the polar opposite of Resident Evil, the series which the first DMC was intended to be a part of before being granted it's own franchise. DMC had players hacking and slashing through enemies in endless combos whilst constantly grading them on how stylishly they executed their klils . Heavily influenced by gothic architecture they developed the look and feel that for the next 12 years would become the series' familiar calling card.

A signature many (myself included) became jaded with; perhaps writing off the series without due cause. The gothic styling became almost a parody of itself whilst it leant on the over-done premise of an Angel vs Demon war with a convenient yet forbidden union resulting in the creation of the all powerful Nephilim, a hybrid of both Demon and Angel who are the only ones capable of saving the world.

For its rebirth Capcom have authorised an alternate universe with western developer Ninja Theory pressing the reboot button. A calculated move which leaves a proven developer to maintain the feel of a Devil May Cry game while hopefully breathing some new life into a stagnant franchise with some new style and flair dragging the series kicking and screaming into 2013. No time is wasted stripping the game back to its fundamentals, the conflict between Heaven and Hell and associated plot points such as the the super powerful Nephilim remain along with style of combat and gameplay which Capcom assisted with to ensure some continuity of feel between the titles.

Everything else has been updated, the redesigns gathered fairly negative press in the lead up to release with Dante's trade mark white hair and buckle obsession eschewed in favour of a much darker version of both our protagonist and the world. He is your classic anti-hero; a wise cracking smart ass who cares little for anyone but himself. That is until he meets Kat, a medium who warns that his rebel ways are attracting unwanted attention and guides him through encounters in the twisted version of the real world known as Limbo where you will be fighting for the majority of the campaign.

The redesign of the world succeeds replacing those gothic structures with a modern background which frequently and literally gets ripped apart as Dante gets dragged into Limbo to face his enemies. The standard environments themselves are nothing exciting but when buildings and paths begin to distort and dark messages about the world and its intentions to ruin your day start appearing, it turns into an interesting visual style which, although it could have used less of the Instagram HDR effect, gives this reboot its own unique personality.

The audio makes a similarly bold statement employing the styles of European artists Noisia and Combichrist who I'm informed are pretty good at something which is known as Aggrotech, a mash up between metal, dubstep and teenage angst. It sounds far more disagreeable than it is and consistently manages to complement the gameplay well, dynamically moving from ambient trance sounds to assaulting guitars and back again without forcing the transition. Combat stays true to what fans might be expecting; focusing on crowd control with a variety of weapons and skills which are drip fed throughout the campaign. A great deal of care has been taken to construct a deep and varied set of combat options. Fundamentally you have four basic weapon types: your trusty sword for garden variety attacks; a demon weapon which tends to be of the heavy type such as a large axe or giant fists, an angel weapon which is usually more fast paced with scythes and giant deadly ninja stars; and then finally a ranged weapon like "Ebony & Ivory", your favourite pair of pistols.

The combat can seem complicated in the early stages with holding down triggers determining which type of weapon you use, juggling enemies in the air with guns and Dante's grapple ability helping you to to pull enemies closer to keep those combos going; there is a lot get your head around. Some enemies can only be damaged by certain types of weapons, once you have become familiar with the mechanics you will find yourself switching between weapons on the fly, juggling enemies and waiting for the Mortal Kombatesque announcer to update you on the ever increasing style score which rates how well you perform, the score increases by using various weapons and attacks without repetition and will be reset when you take a hit.

Each weapon has its own upgrade tree, periodically you will be granted upgrade points to enhance which ever weapon or ability you please.  You might unlock a move which allows Dante to jump off enemies, resetting his double jump ability, or you can upgrade one of your weapons to allow for longer or more complex combos. Although the game takes a long time introducing all these options, it means that just as you get to grips with one style it's time to learn another one, usually to deal with a new type of enemy or a new combination of enemy types. This gives the game a great pace which never stops moving and rarely feels stale despite the repetitive nature of the core combat.

The only time the repetition becomes a problem is in the boss fights, they mix it up with some clever locations and themes but they all boil down to the age old, learn the pattern, execute the moves, QTE and sit back as cool stuff happens formula. Since the combat is so fun it would have been nice to use all the skills you develop throughout the campaign and put them to the test rather than falling back on the age old boss fight convention. It wouldn't be a hack and slash game without the obligatory orb system. Enemies dispense red orbs which are your currency for buying various items, including health refills, a resurrect orb which brings you back to life after death and devil trigger orbs which refils your devil trigger ability. Devil Trigger in the uber stylish mode which turns the world monochrome (think WET) activates bullet time and temporarily boosts your attack damage. Besides looking sublime it doubles down on the feeling you get when you execute a move set well and lay waste to the hordes of enemies without taking a scratch. Which, when it comes to it, is what DmC is all about, style by the bucket load. From the cheeky opening sequence and the twisted worlds which take some unexpected pleasant turns to Dante's snarky one liners and seemingly infinite combat options which will have you performing spectacular combo after combo while you keep your eye on that addictive style rank.

The measure of these titles tends to be how repayable they become, a sure sign of a good hack and slasher is a combat system newcomers can mash their way through while veterans turn up the difficultly and attempt to find out just how many button presses it takes before your thumbs bleed. DmC offers both options, the combat system only fully reveals itself near the end of the game enticing you to start again just to play with all the toys. The campaign itself takes around 10-12 hours to unfold on the Demon Hunter difficulty; the middle of the three you are presented with at the outset. Subsequent completions unlock 4 more difficulty levels each one more ridiculous than the last until you reach "Hell & Hell" mode where you are given three lives, however you die after a single hit. Ninja Theory have done an impressive job with this reboot, maintaining the core of the series, developing a deep combat system which gives those lookng for a challenge plenty to look forward to while carefully redesigning and improving all the things that have been weighing the series down. At the same time they have brought together all their experience with motion capture and voice acting and added it to some inspiring and surprising level design. Dante works well as an anti-hero and the game never takes itself too seriously, allowing them to offer up some genuinely interesting gameplay which hasn't been seen in the series before.

The dull outlines of the Devil May Cry package may have stayed the same with a predictable story and familiar characters but the colour Ninja Theory injected shows off the best part of the franchise and allowed them to add a little personality, humour and variety which it desperately needed.