Once Upon a Time in the South... 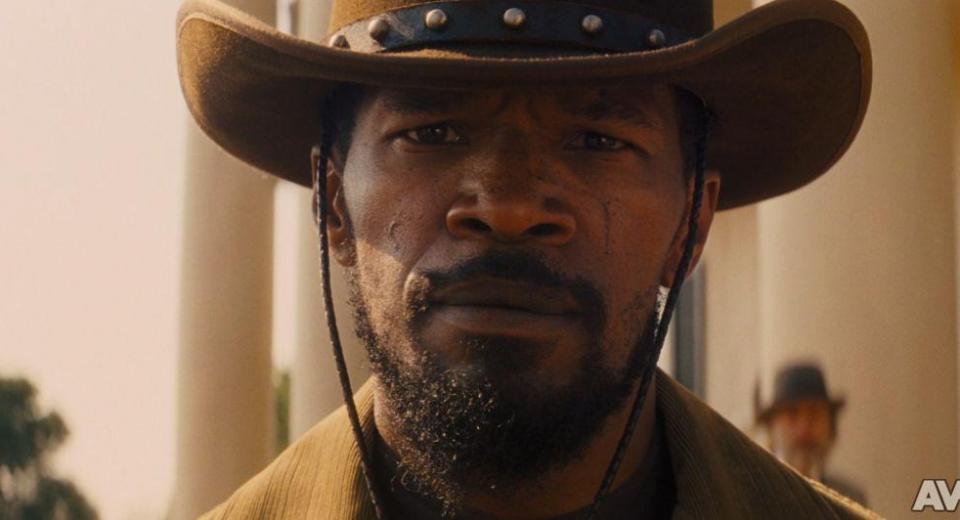 Django Unchained hits UK shores with a Region Free release that appears to be an otherwise mirror image of its preceding US counterpart, presenting the movie with a glorious 1080p/AVC High Definition rendition in its original theatrical aspect ratio of 2.4:1 widescreen. It boasts a strong, well-defined image that benefits from rich detail and impressive depth, making the most of the stunning cinematography, whilst enjoying the fine nuances to Tarantino’s facial close-ups (check out Waltz’s tweakable moustache or Foxx’s decreasingly insane hair). It’s probably the director’s best-looking film, and it is probably the best-looking release of any of his features too. One has to remember that it is also one of those now-rare shot-on-film features which easily impresses as much as any digital equivalent. With even the classic directors like Scorsese turning towards digital cinematography, it’s nice to see a classically-shot film feature like this looking so damn good.

The colour scheme is rich and broad and, whilst the timing is skewed in the direction of warms oranges or colder blues depending on the sequence, this is all in the style and utterly intentional, the tones generally looking vibrant, vivid and authentic, despite the stylistic manipulation (e.g. the heavily over-saturated flashbacks). Blacks are strong and allow for deep, dark shadowing which never once threatens to suck out the detail into its void, with no signs of crush, edge enhancement or unruly DNR. In fact I dare say there isn’t a single shot in the entire runtime which hasn’t been rendered as intended here, leaving the presentation with an easy demo-quality ranking and just shy of a perfect-10 score.

The accompanying DTS-HD Master Audio 5.1 track is more than the equal of the superb video presentation, and similarly mirrors the US release, providing an expertly-crafted soundscape which all-but pulls you into Tarantino’s own skewed version of the Old West and makes you feel right at home there. It’s a strong offering that promotes the razor-sharp dialogue clearly and never less than coherently largely across the frontal array, whilst keenly balancing the supporting elements: from the nuanced effects, which bounce from gunshots to whistling wind, to the engaging, typically excellent score and accompanying song tracks. It’s all perfectly blended together for your aural pleasure, providing a powerful but precise accompaniment to the main feature. Highlights include contributions from everybody from James Brown to Ennio Morricone, and both the score and the effects coverage regularly pulls in LFE contribution which will rumble underfoot as horses gallop past, or shotguns blast out your eardrums (or just to remind you to pay attention!). Another bit of demo material to show off your equipment with, this too is just shy of a perfect-10 rating.

Also matching up to its US counterpart, the UK disc boasts all the same extras, and the same distinct lack of anything substantial.

Featurettes
Remembered J. Michael Riva: The Production Design of Django Unchained is a respectful 13-minute tribute to the late Riva, who died during production, but whose legacy lives on with his impressive contribution to both this feature and numerous others. Collected here are some cast and crew soundbites, including snippets from Riva himself.

Reimagining the Spaghetti Western: The Horses & Stunts of Django Unchained spends 14 minutes looking at the stuntwork in the movie, again with cast and crew contributions – a bit more Tarantino this time – as well as some behind the scenes footage (all of which has been carefully assembled to make sure it doesn’t give the impression that any horses were injured during the making of the movie).

The Costume Designs of Sharen Davis spends a further 12 minutes looking at the design work done to bring the various characters to life in their different – and oftentimes very colourful – outfits. It’s certainly interesting to see the mind behind the madness of some of the outfits, and this is yet another decent extra.

Promo
20 Years In The Making: The Tarantino XX Blu-ray Collection and Django Unchained Soundtrack do their best to promote their respective wares and round out the disc.

Between Quentin Tarantino’s stellar, Oscar-winning script, Christopher Waltz’s Oscar-winning supporting performance, Jamie Foxx’s memorable star turn and a near-perfect set of superb supporting characters, Django Unchained is superior viewing. And that’s even before we get to the evocative score, both directly influenced by and actually featuring contributions from the great composer Ennio Morricone himself; the sumptuous cinematography – which was also Nominated for an Oscar – and the epic scale of the piece, which adopts Tarantino’s usual I-don’t-play-by-the-rules attitude with respect to its four-act structure. Indeed whilst I will likely always argue that Pulp Fiction remains his best work, Django Unchained is one of the rare efforts from the groundbreaking filmmaker that actually has a weighty depth to it; exposing and clinically assassinating much of the age-old bigotry that burned the pre-War South to the core. Hopefully its success will only give Tarantino further opportunities to develop this added layer to his work.

On Region Free UK Blu-ray we get impressive video and audio presentations but a slightly lacklustre extras package, making you wonder whether a double-dip will be on the cards at some future date. Still, there’s no point in waiting – this film comes highly recommended; an unequivocal blind buy for those who haven’t seen it, and a must-have release for those who have.