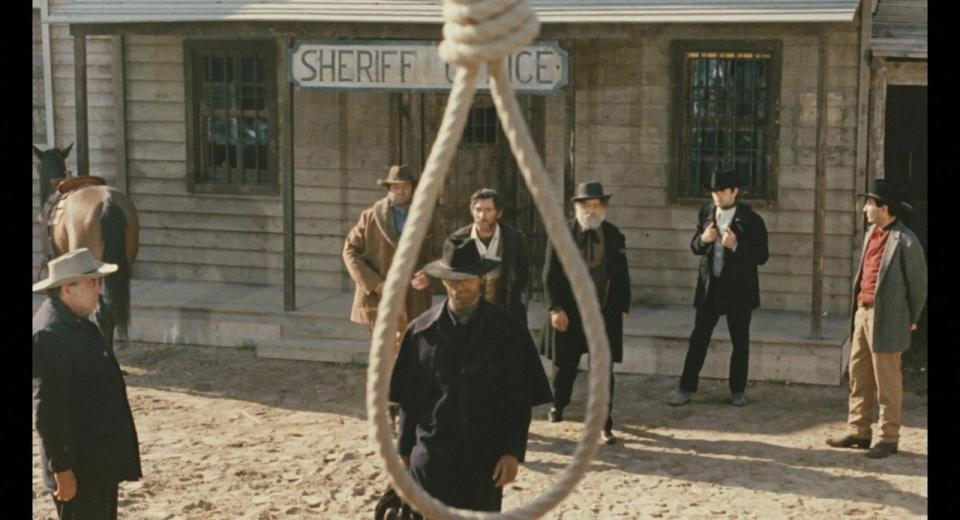 Django, Prepare a Coffin is presented 1.66:1 via AVC. Its 1080p image is hardly an award-winner, but I would say that it is sure to please those well-versed in the genre. Since they released the film on DVD back in January to coincide with Tarantino’s Django Unchained, it has benefitted from a restoration undertaken by Cineteca di Bologna,and the results are definitely not to be sneered at.

Damage is apparent in little pops here and some fades and discolouration there, and there are occasions when thin vertical lines can be seen. So there are definitely times when the print, culled from a 35mm interpositive, shows its age. Some shots even scarcely penetrate the veil into hi-def.. Just look at the scene of Django and his wife chattering away in the wagon near the start. Soft and blurred and utterly lacking in fine detail or delineation. Yet, on the whole, detail is fair and probably much better than has been available before. The source is variable, as is common for this material, but there can be abundant clarity on those grizzled faces, and the ammo-belts, the wooden beams, the spattered mud and the patterns and material weave in clothing. Close-ups can be excellent, in fact, with the treacherous Garcia and the evil Lucas really filling the frame with magnificently complex visages.

There has been some talk of the colours having been tampered with on this one, but I don’t have any other home video version of Baldi’s film to use as a reference. However, even if they have been lessened, or boosted, or flattened, or whatever, they look just fine to me. Arrow’s notes on the transfer refer to the colour-grading and who was behind it for those keen to chase this up. The hue skews warm and earthy, and this fits in with a huge proportion of Spaghetti productions. Orange and browns are fine and dense. The big conflagration is suitably garish and bright, without being crisp and clean. Yellows can sometimes appear a bit too dominant – one scene of a big meeting set beside a river becomes quite sickly wan and hazy because of this. Again, I would probably be inclined to believe that this is common to the original print, as well. Contrast, however, can bloom with white highlights and shiny elements – one daylight background outside the town is horribly dazzled-out - though I suspect that these are also purely down to the source and have always been there. Blacks are variable in depth and, naturally, there are far better out there. But, in the scheme of things, the shadows here aren’t too bad, and the night-time sequences manage to hold their own without too much sacrifice to grey infiltration.

The days of Arrow’s Italian frozen grain transfers seem long gone, with reliable images provided for the likes of Bava’s Baron Blood, Black Sunday, Black Sabbath and Lisa and the Devil, and Django is, likewise, free from some such an unsightly frosted mire. Grain is present and it is reasonably consistent in texture, without devolving into clumpy noise. Anybody remember how its predecessor fared on Blu? Yep, that looked atrocious. This does not.

Finally, I didn’t spot any major errors with aliasing. Fast action and sweeping camera movements remain tight and clear, even if some of the original photography can be jerky and loose. Edge enhancement isn’t an issue, and there is no banding. “I have a special whisky for you. A couple of shots of it and you’ll stop imagining you’re seeing dead men!”

We have a choice of two audio options – both in LPCM 2.0 mono. You can listen to the original Italian mix, or the English dubbed version. Well, ordinarily, I would stand up and say that you should opt for the Italian, but the fact that Spaghettis had international casts all speaking their own lingo sort of makes singling one track out over another a moot point.

Personally, I stuck with the English dub. If anything this makes the film all the more amusing when you can hear the voice actors ladling on hefty Mexican accents, or ridiculously drawled Texan. When Django drives the gold during the introductory ambush, even he sounds a like a big daft hick. Dialogue is hardly full of nuance or inflection. The words are barked and harsh, and often pretty tinny. But this is precisely how you expect to hear it ... so no problems here. The beating that Django receives sounds overly embellished with those exaggerated punches, kicks and impacts, yet still somewhat squashed and restrained due to the limitations of the mix. What works well, though, is the gasps and wheezes that he makes as each thudding blow slams home.

The gunshots are exactly the same as they are in almost all the Spaghetti Westerns from the sixties. In other words they are identical, whether they are from a six-shooter or a rifle. All have that patently phony ricochet or deep, rasping bark. Only when Django fires-up his machine-gun do we get any variance in the audio ballistics. Bass is vintage and low-key but, again, par for the course.

The score does fine. That glorious main theme “You’d Better Smile” rips through the antiquarian nature of the old mix and soars with ripe 60’s gusto. The Cee Lo Green Crazy bass-line thrupps out with clarity and distinction too.

Overall, this does okay. Fans of the genre know exactly what to expect ... and Arrow’s disc doesn’t fumble the bugaboo ball ... of spaghetti. Arrow haven’t exactly stuffed the saddlebags of this one, but they are still to be credited for supplying some goodies for the ride.

There is a reversible sleeve, of which I prefer the original artwork. There is a collectable booklet which probes the background of the film’s production and lavishes some deserved love in its direction, courtesy of genre expert Howard Hughes.

And we get a Theatrical Trailer. Terence Hill’s Django venture is a splendid slice of Spaghetti. A semi-official follow-on in a series of films that have attained a mythical status for name-dropped cashing-in, this one takes a less far out avenue, but still delivers plenty of the essentials. Coffin? Check. Machine-gun? Check. Savage beating? Check. It’s all here. Nobody can come close to Franco Nero’s portrayal in Corbucci’s original, but Hill certainly looks the part of the long-suffering antihero out to right wrongs in a lawless land, and does far better than most that took up the name. It is easy to see why he became so popular with his own Trinity films. Ferdinando Baldi directs with gusto, and his movie has lots of entertaining set-pieces, and no dull patches.

With a slew of classic American Westerns hitting Blu-ray at the moment – Eastwood’s Two Mules for Sister Sara and Joe Kidd, Delmer Daves’ 3.10 To Yuma, Wayne in Rooster Cogburn, The War Wagon and The Man Who Shot Liberty Valance … not to mention Tarantino’s not entirely unrelated Django Unchained – it is great to find another offering from the Italian quarter.

Arrow’s restored transfer isn’t going to wow anyone, though it will surely please aficionados. The extras aren’t great, and a commentary track would have been nice but, overall, this is a satisfying release of a brilliant entry in what would become an increasingly far-out franchise featuring everyone’s favourite antihero with a silent D.