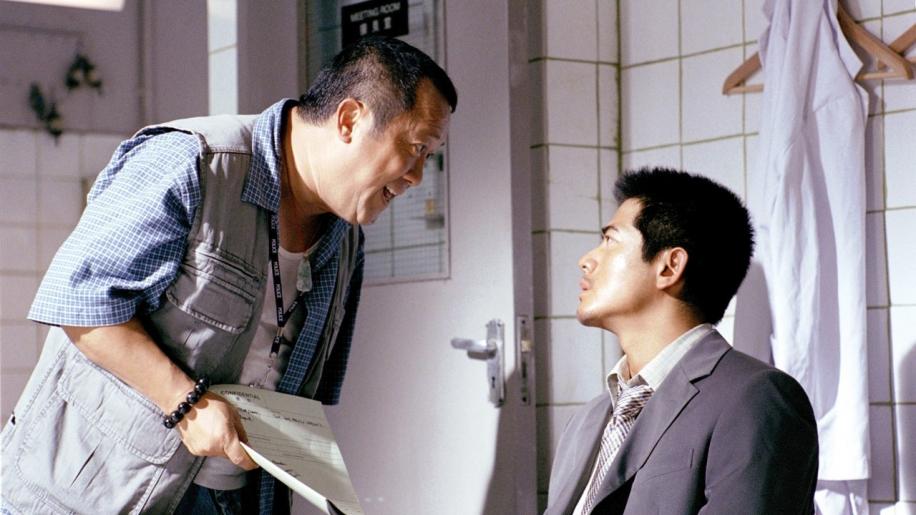 Diverge, the definition in the dictionary is the following :

1.To go or extend in different directions from a common point; branch out. 2.To differ, as in opinion or manner. 3.To depart from a set course or norm; deviate, swerve. 4. Mathematics. To fail to approach a limit.Therefore, Divergence is the act of extending in different directions from a common point - however, here the common point is worked to and not from. The movie opens with a woman walking home late at night after visiting a store. She gets the feeling that she is being followed by someone and is fortunate to bump into someone she knows. We soon see she is indeed being stalked, by a sinister looking male. Just when you think that equilibrium has been restored, the male is garrotted from behind. This opening scene doesn't initially make sense, but over the next 100 minutes, everything starts falling into place.We are introduced to our three protagonists, Suen Siu-yan (Kwok), a police officer who was made famous by hosting a TV show yet harbours a constant cloud over his head, due to his girlfriend having mysteriously disappeared 10 years ago, To Hou-sung (Cheng), a lawyer who seems to specialize in getting guilty clients off the proverbial hook, including one that Suen has been chasing in particular and Yiu Ting-chung (Law), an assassin who we first see killing the witness that Suen has been accompanying. Suen, suitably distraught soon attacks the client Hou-Sung is currently defending, a rather important crime boss. This all happens in the first ten minutes. Soon, we learn of an intricate plot, where everything isn't quite what it seems and that all three of our central cast have a lot more tying them together than initially meets the eye.So that's the start of the movie, but I'm not going to say more than that because I'm a firm believer in not spoiling films. This is quite an intense movie, in so far as the plot doesn't let up - it hooks you and keeps spiralling, weaving its web until the final showdown, where all the plot threads come together and give us a not completely satisfying, yet entirely fine climax. We have some fine acting work on hand, although Angelica Lee is woefully underused, especially as she was excellent in “Koma” but the three main leads are very convincing indeed, in particular Kwok, who although in one scene seems to be overacting, given the circumstances of the event that triggers this, I can't help but wonder if I'd react the same way or indeed in some other, similar manner. The initial start of the movie, to me, was rather spectacular; it actually made me think for the first time ever that the production values were on a par with a Hollywood production, which was a little bit of a shocker. However, these values were a little up and down during the movie, at one point we have what I'd say is the worst green screen effect I've seen in a long time. There are also a few picture issues (more on that later) which ruined the initial reaction too. On the plus side this does have a superb, frantic chase scene, on foot no less which culminates in a showdown between policeman and assassin. Absolutely superb stuff - Hollywood take note, you don't always need to have people driving cars for a decent chase scene! Not to mention, although you can eventually see where this is going, it is actually quite engrossing stuff to watch - movies like this are the reason why more people are slowly switching on to Asian cinema, because it's frankly less insulting to your intelligence compared to something like the frankly dreadful Bad Boys 2. I admit this isn't the next big thing, but if the calibre of the productions improve just a little more (green screen effect in particular) then Hollywood won't have to worry about stealing movies to remake - it will have a genuine threat.