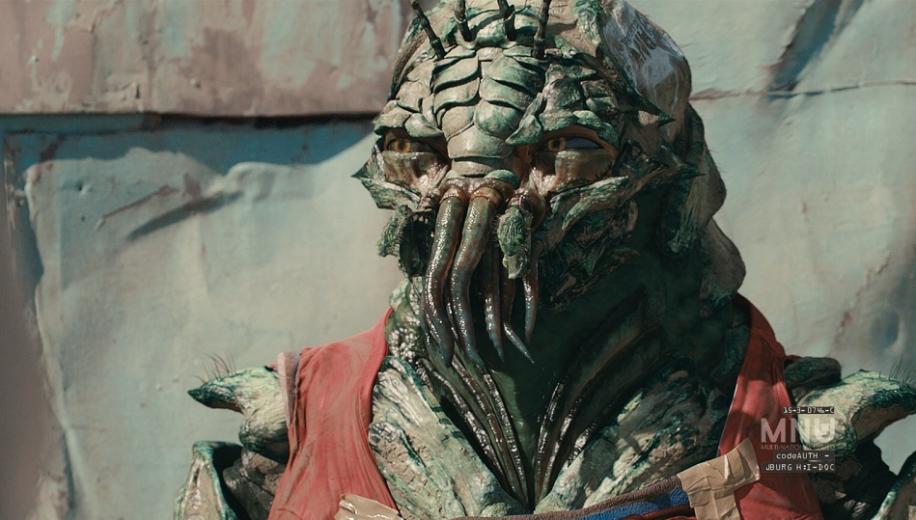 Could you go a bit slower with the clicks there, it sounded like you said three years!

Predominantly known as a short film director, but with a prodigious talent, Neill Blomkamp was all set to make his first feature when the funding fell through, so Peter Jackson (and wife) took him under their wing and secured money for a different feature, one that was close to Blomkamp’s heart, at least the social aspects, which turned out to be the multi-nominated and award winning science fiction actioner, District 9.

Being heavily influenced by the slums and segregation of his childhood, but dressing the film as an alien invasion/metamorphosis/actioner, District 9, instantly spoke volumes. Stylistically being part documentary/found footage/traditional film the whole melds beautifully, largely thanks to the sympathetic lead of Sharlto Copley who plays the hapless Wikus Van De Merwe upon whom such misfortune descends.

The attention to detail regarding the sets, locations, camera work, alien technology, history and characters means the audience becomes invested in the story. And whilst the plot is fairly standard in terms of device and trope, such is the verve of the story telling and the emotional investment, the whole becomes an eminently watchable film. It catapulted Blomkamp into the limelight and enabled him to air other grievances in his subsequent science fiction actioners Elysium and Chappie.

Despite being an up-scale, you wouldn’t really know it. The filming style, a combination of hand-held, documentary video camera and traditional film, means that it is always going to look a certain way; however, the extra resolution and the HDR elevated the image to something else.

Detail is improved with close ups, skin texture, the filth and squalor of the camp being a prime example, while distance shots, over looking the city, the Mothership or helicopter shots of the camp all benefit with keener, more defined edges. The computer terminals, and the HUD of the alien technology are well defined.

WCG and HDR add significantly to the colour palette bringing out a far richer, more naturalistic tone, so flesh tones, and primaries are more vivid with greater depth; while the dusty tans of the sandy landscape are amazing.

Black level is improved with a greater frame depth, but the picture really excels with the white scale, which brings out the definition and pushes the image, lovely stuff.

Digitally there are no compression issues and the only flaws are inherent in the source and meant to be there.

The Dolby Atmos track really opens up the surround field, is more dynamic and even extends the bass. Effects are well catered for and layered will into the 3D landscape, whether there are helicopters flying above, announcements from tannoys, office chatter, gun fire, or manoeuvres in the camp – there is always something going on. Dialogue is tied well to the frontal array, though some directionality is experienced.

When the action heats up, the gun fire is all around, with the alien weaponry and subsequent destruction being of particular delight (loved the exploding splatter). Bass is tremendous with some wonderful LF effects, this is especially true of the Mothership moving, jet engines and some of the heavier weaponry. Nothing is ever lost in the mix and the whole is wonderfully separated.

The majority of the extras are found on the included Blu-ray, with the new supplements on the UHD.

Comic-Con Extravaganza – 20 minute feature with Peter Jackson, Neill Blomkamp and Sharlto Copley, that is a bit all over the place regarding content, but nevertheless covers quite a lot in its run time.

Joburg From Above: Satellite and Schematics of the World of District 9

Metamorphosis: The Transformation of Wikus

Innovation: The Acting and Improvisation of District 9

Conception and Design: Creating the World of District 9

A stunning first feature film from writer/director Neill Blomkamp being a multi-nominated and award wining science fiction story, involving a human being absorbed into an alien culture, quite literally, packs an emotional punch, is action orientated and cuts swathes with its rich social commentary. Stunning.

As a 4K UHD the set from Sony is equally as good; the up-scaled picture is bright, well detailed with vibrant colouring and strong blacks, while the Dolby Atmos track is a surround extravaganza and packs a solid bass punch; add to it a few new extras and you have a winning package.