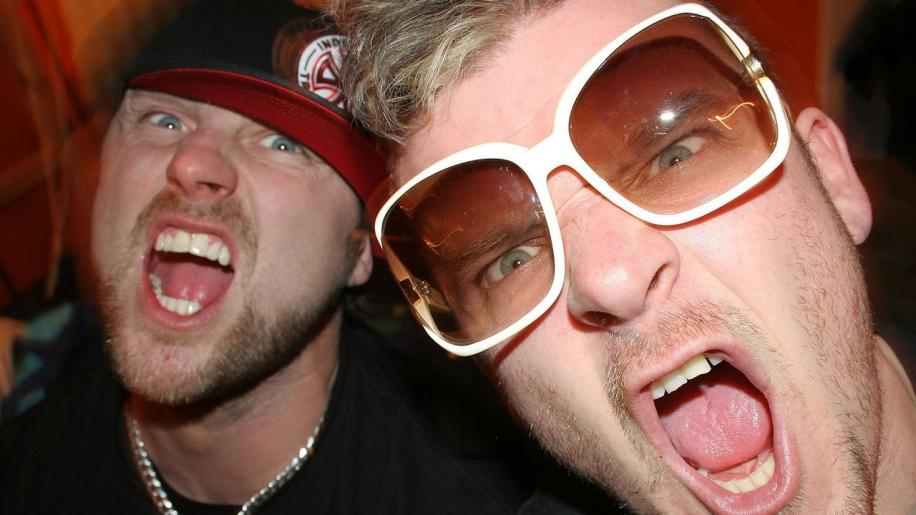 It is with no small amount of trepidation that I approached this release. I had never seen this Welsh contingent of Jackass-inspired delinquency before but had heard lots of anecdotes and stories about their notorious exploits from friends who either loved or loathed it. And not being a fan of their American counterparts in any way, shape or form, I had a lot of reservations about this 2-disc extravaganza of slapstick shock and schlock. But preconceptions can be a terribly off-the-mark type of thing and I can now confess to being incredibly surprised by just how much I enjoyed this non-stop barrage of chaotic chromosome-shedding and hard-headed self-harassment. Clearly inspired by their corrupted cousins from across the Atlantic, the Sanchez team go to equally disturbing lengths in order to damage, belittle, lampoon and degrade themselves for viewer gratification, all the while proving to each other that they can take more, dish more and devise more diseased scenarios than their own cavalier brethren. Obviously a fad and a huge, though sadly inevitable extension of the reality-cum-celebrity trend that is still locomoting its way through the popular media, this brand of bizarre “performance art” actually has its roots in the medieval circuses of the grotesque that would merrily parade depravity and torment for the pleasure of the masses. That the perpetrators of these acts can nowadays become notorious celebrities and even millionaires off the back of them is hardly surprising. MTV contracts and a wide-ranging fan-base ensure the longevity of such curios. Thus, like the masses jeering for blood and spectacle at the Roman Coliseum, audiences around the world thrive on this endorphin-rich catharsis, safe in the knowledge that the humiliation and the agonies aren't happening to them. And, much like latter-day gladiators, the participants of these shows gain incredible kudos and lasting admiration from their suitably jaded acolytes.

Sounds a bit preposterous, doesn't it? That grown men can become heroes just by inflicting intense grievous bodily harm upon their bodies for the gratification of others, and all to the accompaniment of raucous laughter and an atmosphere of totally unparalleled riot, is warped and deranged, of course ... but, boy, it can be a blast! And I didn't expect to say anything like that, believe me.

Sadly, I cannot use any quotes to punctuate this review in my usual style because there simply isn't anything tame enough. Mind you, even if the team employ more obscenities than Goodfellas and South Park The Movie combined, it is still perverse just how strangely inoffensive the whole routine comes across. Well, perhaps that's just me. But, for my money, the expletives liberally flung around in Dirty Sanchez are wholly borne out by the circumstances that created them in the first place. Having ball-bearings fired point blank into the family jewels would have a similar effect on me, I can tell you. Or having chilli-powder blown into my eye. And the cumulative effect of such depraved activities and their vocal accompaniment is one of pure, unadulterated delirium. It is cathartic to witness such deeds being committed upon someone else, although it must be also be stated that the participants are all totally willing and consensual. Then again, no matter how inebriated I become I will never - and I mean NEVER - even contemplate doing what the gang christen the Moscow Circumcision. Think about it ... some very precious skin and a frozen drainpipe. Very unwise, un-hygienic and un-recommended and, to be honest, I didn't even watch this sequence in its entirety. In fact, I challenge you - any of you - to get through this moment of madness.

Getting to know the crew is instantaneous and addictive. Ostensible leaders Dainton and Pritchard are at loggerheads, forever trying to outdo one another in terms of extreme endurance and idiocy. Yet their pent-up, hardboiled rage is ranting of pure pantomimic proportions, an ongoing warfare of tit-for-tat that can only ever have one victor. Us. Poor Pancho - not as small as the little feller that Jackass like to abuse so regularly, but just as put-upon - is the butt of a lot of maltreatment. And Dan Joyce just seems to hang on without the same huge sense of personality but a lot of devil-may-care confidence and a laugh that is just as infectious as his cohorts. Pancho snores wildly and can virtually sleep through a hurricane, so it is hardly surprising that whenever he tries to catch some shut-eye he ends up having his nostrils super-glued together, his head shaved, chilli-sauce sprayed into his eyes or just generally hit, smacked and beaten. One memorable incident sees his buddies paint him green and rip the clothes he is wearing to shreds. A swift clout to the head results in a mini-Hulk from the Valleys erupting from the land of nod. Barrack-room stuff, folks ... and no less amusing for all its loutish lunacy.

The plot - as if a show like this actually needs one - has the foursome meet a grisly end after a particular stunt goes horribly wrong. Dragged down to Hell, even the Devil, himself, doesn't want this motley crew of impulsive imps lowering the tone of his establishment, so he offers them a final chance for soul redemption - travel the world re-enacting the seven deadly sins. Oh, and cause as much distress, upset and nausea as they can along the way. So what follows is a whistle-stop tour of some of the globe's less salubrious haunts - Bangkok, Phi-Phi, Russia, Mexico etc - as the group embark on a mission of mutual disrespect and all-round abhorrence.

Watch as the quartet become human targets for English toffs unleashing a barrage of clay pigeons at them. Chortle as they set up gullible Pritchard for a bogus World Record Attempt at withstanding paint-ball impacts, and wince as he ultimately reveals the extent of some quite horrific injuries. “Skin's a beautiful thing,” he whimpers, proud of his achievement despite the pain, “it heals, see?” Shudder as they indulge in a way-too-risky gamble of “guess of the ladyboy” - via way too much tongues and body contact - and squeal as Pancho undergoes liposuction from a backstreet Bangkok surgeon. But you will have to prepare yourself for the moment when, after a couple of rounds of very intriguing roulette involving a young lady secreted beneath a table and our heroes' flies conveniently hanging undone, Pancho then decides to up the ante by having his sucked-away fat and blood made into the most stomach-churning cocktail forfeit yet devised. Sick-bags at the ready, if you please.

But there is a wonderful sense of manic, irreverent camaraderie about this mob that lifts their foolhardiness to an altogether more rib-ticklingly devoted degree. A rogue gene of lunatic endurance and a sheer willingness to push beyond the realms of societal constraint that I can only sit back and admire. I've done a vast variety of incredibly stupid things in my time - all in the name of fun, you understand - but there is an unwritten, unspoken line over which I, and the vast majority of folks, no matter how “mad” they may claim to be, would refuse to go. The Dirty Sanchez brigade knows no such boundary which, in itself, is impressive. Therefore, I can declare this glorification of brain-death a rip-roaring success and a wild and wicked celebration of dangerous-but-daft anarchy. The devil-may-care attitude and the play-fighting set-ups and pranks are often nauseating and vile, but never less than hysterical. The laughter that each act inspires just creases me up every time, and it is to the production's endless credit that it can make the viewer feel so involved and connected with the four idiots laying waste to themselves or one another on-screen. It is also prudent to note that one act of insanity, involving a rabbit's rear end and a hungry team-member did not actually make it into the finished cut. And, with hindsight, this is possibly for the best.

Folks, Dirty Sanchez The Movie is very definitely of the love it or loathe it variety, but it won me over with its boundless energy, eye-popping stunts and totally brazen “in-yer-face” attitude and comes very highly recommended, providing, that is, that you have the necessary taste. Vulgar, crude, puerile and scat-happy without a doubt, and duty-bound to be so, Dirty Sanchez possesses something else, too - the golden seed of genius to those of us with a somewhat jaded and darker palate.