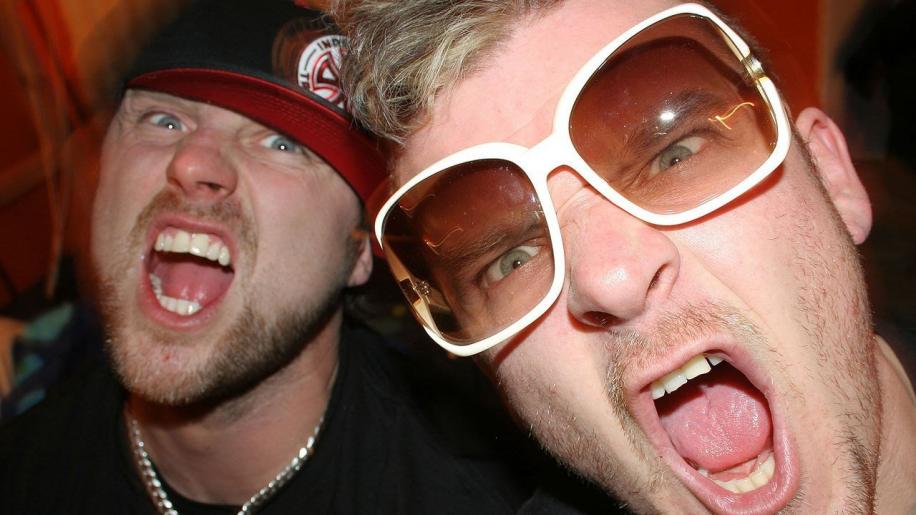 The movie is brought to this SD release with an anamorphic 2.35:1 transfer that takes a pride in its fly-on-the-wall approach with an image that is forever fluid and often all over the place. But the picture is pretty well put together, considering the nature of the filmmaking involved. Hand-held shaky-cam this may be, but the majority of the film is clear and sharp enough to make sense of every horrid, hilarious or hurt-filled incident. There are elements of smearing and haziness amid an image that, whilst colourful, is hardly a showcase for home cinema but, then again, presents the absurdity in a full-on, no-frills manner. It would be pointless to find an issue with material such as this, but for the sake of nit-picking I will say that the contrast can often be too high and the colours a tad over-saturated.

However, any defects in the image will be largely overlooked due to the fact that your eyes will, more often than not, be filled with tears of laughter or pain. And occasionally both.

Dirty Sanchez is furnished with a DD 5.1 that is loud and punchy, but predominantly spread across the front speakers with a width that is hardly demanding. The focus of the piece is of the up-front variety and capitalises on blaring dialogue and aggressive rock music to punctuate the proceedings. There is some attempt to widen the soundfield as voices can often drift across the speakers and there is also some effective ambience from crowd scenes, but this is basically a track that doesn't test your set-up and is content to simply hurl the sound out without crafting anything special in the way of effects or steerage. Voices and music are always clear with screams, expletives and that all-important infectious laughter filling the room with frenzied abandon.

No stretch for 5.1, but the track does all it needs to.

Whatever your opinion of these boyo-bozos, you can't deny their wild enthusiasm, and it is nice to see that this trait is carried on through with their commitment to DVD. This 2-disc release comes with quite a roster of extra features.

Disc 1 contains the main feature and a commentary from Dainton, Pritchard and the director Jim Hickey, which, if anything, is at least as amusing as the antics seen on-screen. Much laughter and a little bit of insight into the twisted mind-work behind the stunts adds a further degree to the world of Dirty Sanchez.

There is also the music videos for Turbe Negro Versus Dirty Sanchez and a short Making Of for the video.

Pancho's Lullaby is tribute to the diminutive team mascot, though it primarily takes the form of the catalogue of torments that he underwent throughout the making of the movie. Sort of a Greatest Hits ... with the emphasis being on the hits, naturally.

Disc 2 houses a whopping 90 mins of Unseen Stunts. Well, it says unseen but when I regaled a mate of mine about the quartet engaging in a spot of the apparently quaint old English sport of Shin-kicking with the reigning champions from the other side of the border, he claimed that he had seen this already. So, whether or not this further selection of pure insanity is being aired here for the first time, is debatable. However, rest assured the stunts and set-ups to be found here are just as hilarious as the main feature. Witness the Russian dog attack sequence and the full Mexican Feast, but the coup de grace has to be the prolonged episode that sees Joycey's Siberian-frozen poo being lobbed about the team's apartment with terrifying consequences - acutely so when the brown-brick is lost and Dainton then realises that at some point it is going to defrost and let the full flavour flood out, as it were. But don't forget to check out the moment when Pritchard has to reveal his new tattoo to his and Dainton's girlfriends - a wacky bit of revenge on Dainton that was always going to backfire on him. You can view these individually or via a Play All option.

Press Interviews lasts for 8.40 mins and is just the foursome doing a “to-camera” introduction into their crazy world, mixed-up ethics and the whole modus operandi of Dirty Sanchez. Actually very funny, the segment naturally slides into much verbal sparring although there are some candid facts about their background that manage to surface now and again which, for me as a complete newcomer, was welcome.

Around The World In 4.30 Minutes (actually 3.40 mins) is just a jazzed-up highlights compendium of the film's exploits.

Red Bull Rock Flight (9.20 mins) has us following the gang - well three of them, anyway - as they travel to Madrid to watch (and party with) the Red Rock X Fighters Motocross Team. Of course, Dirty Sanchez have wilder stuff in mind for the party than anybody else reckons on - try the pubic hair bong, for instance.

And finally, besides the trailer, we have a little featurette entitled Making The Title Sequence. Running for 4.30 mins, this chronicles the sheer hard work involved in trying to act out being dragged down into Hell, and is typically hilarious and screwed-up.

All things considered, this is a great bunch of extra features. The Unseen Stunts make the whole thing worthwhile on their own.

Considering that I came into this thing with a totally biased opinion and thoroughly expected to hate the whole enterprise with a vengeance, Dirty Sanchez has found a new fan. It certainly isn't for everyone - strong stomachs and a thick, hefty slice of laddish humour are essential - but if you have the requisite funny-bone in place and a crate of lager and few mates around, you could do far worse than kick back and gawp in dismay at this morally dubious cavalcade of outrage. I'm probably already preaching to the converted - if you weren't, I doubt that you'd have read this far - but this is great and garners its own truly weird brand of feel-good factor. That sounds mad, I know, but if you stick with it, the foursome really do grow on you. You'd have to insane to invite them round, though.

For fans this is essential. For the rest, you'll know pretty quickly whether it's for you or not. This 2-disc package is well-stocked with goodies, too ... so, go on, give it a whirl. I dare you.