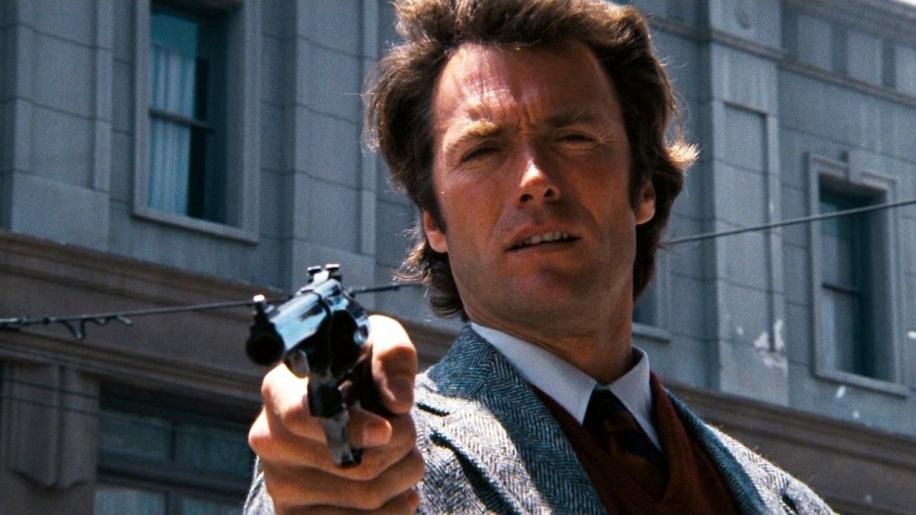 The year is 1983, the VCR is a JVC top loading silver monster with a huge display and buttons to match. Having been used primarily to view pirate videos (naughty I know) it also had its fair share of legitimate titles, videos in huge breeze block size cases and just as heavy! Of the several films that spring to mind that I'd watched at that young tender one is the Exorcist and other is Dirty Harry. I have vivid memories of thoroughly enjoying Eastwood as he laid waste to the criminal fraternity in San Francisco. It was my first brush with the film and it is one that has stayed with me all this time. There is something distinctly seminal about Dirty Harry, many different factors coming into play, not least of which was scripting and timing. In an America still reeling from the Vietnam war, with a cynical population distrusting its own government and civil unrest being rife, Inspector Harry Callahan was a beacon of anti-establishment blazing through the red tape with his cannon of a pistol while still chewing on his hotdog. Much has been said and written about this iconic figure, this classic piece of cinema and I don't propose to repeat it here; so instead I'll take a brief look at what the film means to me and how it sculpted the future.

Donnie Siegel's opening shot through the sniper scope places the audience firmly in the eyes of the killer; there is a voyeuristic sense of power viewing the innocent as she swims oblivious; holding sway over her very existence; we don't yet know that it will ultimately end in bloodshed, even though we feel it. Lalo Schifrin's score rings in our ears, building, building; we're poised, edge of the seat, is she going to die, a shot rings out, the victim falls; Dirty Harry begins. Siegel is very shrewd with this opening, setting the pace and tone for the oncoming onslaught, but viewing from one distinct perspective; watch later when he uses the same techniques but this time we view from Harry's perspective as he hunts down Scorpio through his binoculars. This time around there is even more voyeuristic power as we spy through windows into intimate lives, the same side of the same coin, only this time as protector not murderer.

This duality of scenes is mirrored between the duality between Scorpio and Callahan; they are opposite sides of the law but both have the same contempt for it; Scorpio inflicts torture and pain to his victims, Callahan inflicts the same to Scorpio. To fully understand their nature we have to delve more into their respective psyche, but here is another moment of genius, neither are given any specific background other than how they act through the course of their intertwining. And it's not needed. Callahan is ostensively 'good' standing up for justice, bucking the law for the right thing. Scorpio is sheer madness without respect for anyone least of all himself; witness as he pays to have himself beaten to a pulp just to implicate Callahan. These simple dimensions to the characters are all we need to know and where we stand, depth and insight are unnecessary when each is played so well by their respective roles.

Andrew Robinson simply is Scorpio, right down to manic hair and lunatic eyes. With a silky voice that cracks in insanity as the strings of his plan unravel, Robinson plays the character with such wild abandonment that it, for me, has coloured his career path ever since, no matter what the part, however innocent, there is always an element of the Scorpio mania bubbling away just under the surface.

As for Eastwood, well Harry Callahan is the iconic figure and a part that now seems impossible for anyone else to play. Eastwood rode out of the desert and into the city and brought that ice cold stare, curled lip and six shooter with him. Just as Leone's characters had neither name nor past, Callahan may have gained a name but his past is just as mysterious, neither does he need one. Like a one man force holding back the tide of corruption both in and out of the system, Callahan in the untouchable, the unbreakable, the figurehead of truth and justice. He may break as many rules as those he is sworn to catch but the results he gets earns him the clemency to continue the struggle. The .44 Magnum he totes is a symbol of unerring direction, like Callahan the weapon is also unstoppable; its introduction to the cinema going public with those immortal lines drawled out. It legacy remained as the lone shark until the Asian market began to spray the frame with bullets; but it took Tarantino to show it to Hollywood.

Upon its release Dirty Harry was lambasted for its ambiguous politics, even once denounced as Fascist propaganda, and there is a grain of truth to the thinking; there is no black and white here, only varying shades of grey, the pinnacle of which is during the final scene when Callahan throws his badge. It is perhaps this ambiguity that drives the film forward and not the cat and mouse battle with the deliberate pacing. Witness Callahan's ascent to the suicide jumper, the lazy search of the roof tops by the helicopters or the climatic shoot out, each takes their time; a far cry from the quick cutting MTV style of moviemaking that predominates now. Keeping that pacing, keeping that ambiguity, keeping those characters, Dirty Harry becomes a tower among its peers and the benchmark against which all subsequents try to live up. Even this far down the line none have managed to match the raw power and brutality. Oh there are be bloodier (although Harry is no slouch) but for sheer visceral carnage this original has not been beaten. It has cast a long shadow that few have escaped from, and why should they? It's hard to improve upon perfection and when it comes to Dirty Harry there is no reason to try.