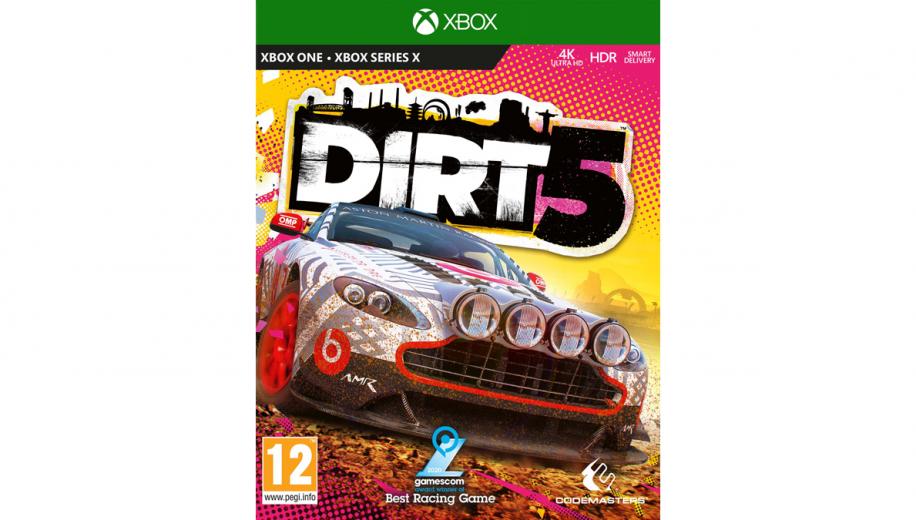 In recent years there has been something of a shift towards more simulation-based racing, which can seem like a far cry from the glory days of Need for Speed and Burnout and other arcade classics before the likes of Forza Motorsport and Gran Turismo came along. With the evolution of the Dirt franchise, Codemasters has been looking to redress the balance and deliver some extreme and slightly over-the-top off-road racing that’s still at least grounded with a semblance of reality courtesy of its old rallying days. Dirt 5 doesn’t really add anything new to that mix – although split-screen multiplayer and the new Playground creation system are very welcome – but it does seem to be a game built with at least one eye focused on the next-gen consoles. As you’d expect it combines a wealth of vehicles, tracks and enough customisation options that it would take far too long to count them, and pitches it all against a plush variety of backdrops that are as sumptuous to look at as they are challenging to navigate at high speed.

Dirt 5 isn’t perfect but it has more hits than misses...

There can be a fine line between arcade-style thrills and even a semi-realistic handling system; that balance between exaggerated silliness against a thumping soundtrack for cool showmanship and gameplay that’s actually weighted by real-world physics. In this respect Dirt 5 isn’t perfect but it has more hits than misses, and there’s a whole lot of fun to be had as long as you don’t really need a reason to be racing.

The Down and Dirty

At the core of Dirt 5 is a Career mode taking you all around the world and steering you through the full breadth of vehicles and racing styles on offer. Although you’re given a token nickname, there’s no real storyline in play as to who you are or why you’re taking part in all these races – and, as such, the career is lacking a real personality or sense of motivation for winning that next race and unlocking new cars and liveries, besides the obvious benefits of bagging a more potent ride.

There is some narration and in-game podcast chatter that’s supposed to add some context but we found it more annoying (and thankfully skippable), leaving the whole career to be rather lifeless in terms of progression. Instead, it comes across as some 120+ individual races stacked into a flow chart that you get to work through, with the occasional head-to-head ‘Throwdown’ race against a named racer once your reputation has stacked up enough and a grand finale to wrap things up. It’s not that it’s a bad set-up, it’s just more that we missed the sense of immersion that the likes of Forza Horizon offer up – but then not everyone needs a reason to just dive into some fast and furious racing and it’s here where the game really does come to life. It also helps that the game rarely demands success, with in-game mini-objectives that are usually quite straightforward (making overtakes, drifting, jumps and so on) powering your progress even if you crash out and finish last, with only a few headline events requiring a top three finish to unlock the next tier of races.

Outside of Career mode, you can create your own races, both online and offline – with the aforementioned split-screen option allowing for some fun with friends – and some fun multiplayer ‘party’ modes. There’s also a Time Trial mode enabling you to race against the clock at any of the 75+ pre-set tracks and using any of the 60+ vehicles in the game, which could provide a nice challenge for the racing connoisseurs who’ve been mastering their craft in the likes of Codemasters’ far more serious F1 2020.

Lacking a real personality or sense of motivation for winning that next race...

It will also be interesting to see how much is made of the new Playground mode, which, as the name suggests, provides a sandbox for users to create their own tracks. These are limited in terms of space to more arena-styled circuits (unlike the career tracks which can be stretched out for miles) but you’re free to make up your own checkpoint races, gymkhana events or silly-but-fun ‘Smash Attack’ events where the aim is to crash into a bunch of stuff. Certainly from the examples already included there’s plenty of potential for loads of great new challenges that could really add to the overall package if the community jumps on board.

In terms of the racing itself, Dirt 5 offers up a rich mix, even if many of the different flavours do taste much the same. There are 13 key vehicle classes covering the usual assortment of slick rally cars, off-road trucks, heavy muscle cars, buggies and so on, with noticeable differences in their handling from the sublime to the ridiculous.

Being largely an off-road racing experience the constant factor in Dirt 5 is the battle to keep each vehicle under some kind of control. Racing on super-slick mud or across creaking ice sheets, grip is usually at a minimum and unless you’re either using a steering wheel set-up or are that rare breed of racer who doesn’t accelerate at 100% throttle, then oversteer is a major problem that can have you fish-tailing down many a straight. Of course, using this to your advantage as you drift seamlessly around tight hairpins or long sweeping corners is part of the fun. That said, more often than not this does seem to be a slower option than just braking and finding the best racing line which did kill our buzz a little bit – but didn’t stop us from pumping that handbrake for some cheap thrills, especially as it’s often tied to those in-race objectives.

Part of the challenge is to master each vehicle type, even if a few of them can seem horrific during your first few tries. Equally, many of the tracks require a little familiarity to avoid making the same mistakes – from simply dodging outlying rocks to easing off before an extreme jump so you don’t go flying out of bounds. So while Dirt 5 is still mainly about arcade extravagance, there are those extra levels of perfection for the racing purists to immerse themselves in – even if the rewards are negligible.

Racing on super-slick mud or across creaking ice sheets, grip is usually at a minimum...

Speaking of out of bounds, we did have a few issues with the variable elasticity of the AI – which on one occasion went flying over a hoarding into some trees, before promptly overtaking us on the very same straight. Certainly some races can seem a lot easier than others for no obvious reason, although with 12 cars packed onto the grid with some very tight tracks and some tough punishments for running into each other (such as loss of power if rear-ending the car in front or being bumped off the track) getting to the front of the pack early on can make a big difference. Another annoying feature is that parts of a track don’t have obvious barriers to align yourself within, but if the game considers you to be outside its limits, perhaps simply by cutting a corner, then you’ll get reset back on the track and potentially lose enough time to be comfortably down in last place. Tied in with a few other quirks, such as losing sight of the track ahead if you’re heading uphill (unless you’re using the cockpit camera) and relying more on the mini-map for a sense of direction to begin with, this does hark back to the need to get used to the tracks before you can really start to enjoy them.

From a visual perspective, Dirt 5 is a very impressive piece of work. Though this review was conducted on an Xbox One, there’s definitely a sense that Codemasters has had at least one eye on the next-gen consoles such is level of visual fidelity in play. Mud and water are being constantly thrown up, both onto the camera and on the cars (adding nicely to the real-time evolution of your chosen ride in every race) and there are plenty of other in-game effects including fireworks, lightning strikes and more. Set against some great-looking backdrops, Dirt 5 can be a wonderful spectacle and we’d be confident the new consoles will make this even more apparent. However, this doesn’t always make life quite so easy for the gamer, with the likes of some dazzling sunlight effects or otherwise impressively deep shadows making it increasingly difficult to see the road ahead. Likewise, some of the night races aren’t brilliantly lit – and, in what could be one potential limitation of the current consoles, sometimes the upcoming street lights would often be slow to load (along with some slow-ish loading times in general).

Set against some great-looking backdrops, Dirt 5 can be a wonderful spectacle...

The audio is solid throughout, backed by an excellent soundtrack to help keep the party mood. The cars sound great, although the volume levels are through the roof on some of them, screaming into your speakers like an angry drunken tiger, so you might want to tone things down via the menu settings to keep your neighbours friendly. As mentioned, there is some background chatter to add a little extra narrative to proceedings. With illustrious voice actors Troy Baker and Nolan North among those at the mic, these do try to be fun and whimsical but mostly come across as mildly irritating at best.

As is now becoming the norm, the Xbox One and PS4 versions of Dirt 5 can be upgraded to the next-gen versions for free after they launch. The standard caveat is that if you buy a physical copy, you can only upgrade to a console that has a disc drive (as you need the disc to do so), whereas it’s all good if you download it digitally instead. One added bonus is the capacity for cross-generational play, so PS4 gamers can race against those on a PS5, and the same with XO, XSX and XSS owners.

In terms of the upgrade, the specifics aren’t clear ahead of the impending launch, although faster loading times and ‘greater graphical fidelity’ are a given. 4K UHD is expected, although maybe not for the Xbox Series S, and it seems as if framerates of 120fps will be a definite option alongside the standard 60fps (rather than just a generic ‘up to’ 120) – with an in-game choice on all versions to prioritise either the resolution or the framerate. There are also upgrades via the PS5 controller, including added haptic feedback and adaptive/resistive triggers. Though offering little that's new, as an arcade racer Dirt 5 can be a lot of fun while also providing just enough of a challenge to keep the more serious racing connoisseur coming back for more. It’s not flawless and some of the handling can take a little getting used to, but there’s a decent amount of variety to keep things fresh and, from a visual perspective, the game looks ready to make the next-gen leap.

Surprisingly the only thing really missing from the game is a personality, with the Career mode offering no real inspiration or motivation from one race to the next, and the overall aesthetic just lacks a certain spark to elevate the experience as a whole. However, it’s on the track, and frequently off it, that really counts and once again that’s where Dirt 5 absolutely delivers.