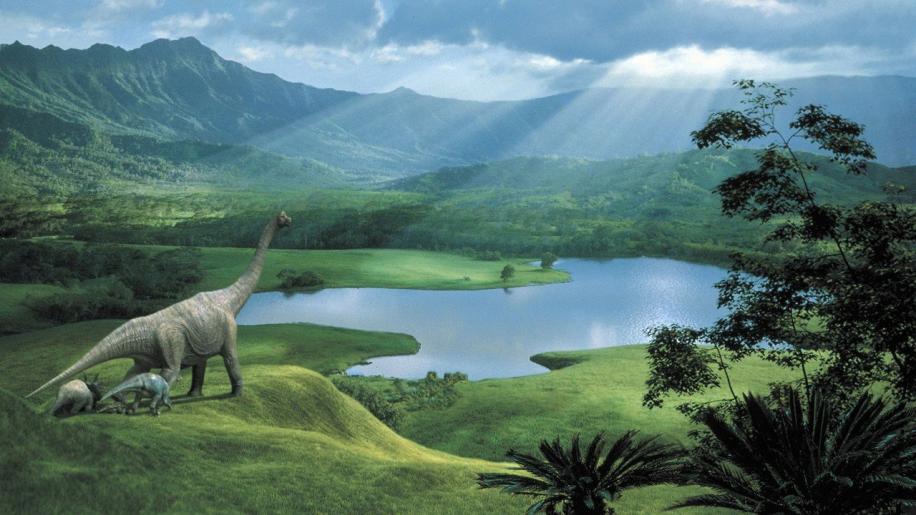 When I first caught Disney's CG groundbreaker I was remarkably disappointed. I'd been wowed by the marvellous trailer - that natty “Journey Of The Egg” sequence wasn't half doing the rounds at the time - and thought that, by contrast, the final movie was something of a drab and dreary letdown, bled-dry rather than resplendant. The film's plot also seemed so downright familiar as well. Disney's ethics have never really altered over the years - and nor should they, for that matter - but following so closely on the colourful heels of The Lion King, Dinosaur still felt like it was self-plagiarised to the point of parody. The film, although very popular on DVD, was something of a failure at the box-office, somehow endorsing the fact that the viewing public who, for decades hadn't minded at all paying out to see the same honour-and-romance, moralistic fables trotted out ad nauseam, actually wanted something a little different this time around. But, taking its cue from the runaway success of Jurassic Park and the new-found love of all things prehistoric, Dinosaur, with its handy catch-all one-word title, still goes back to basics and tells the simple saga of one outsider not only learning to belong, but being able to prove his worth in a dangerous world whilst providing fully rounded humanitarian qualities. Sometimes, the Disney Code is like a Beauty Queen's sugary pledge to the world, isn't it?

Separated, as an un-hatched egg, from his mother, a baby Iguanodon - or Allosuarus, I can never tell - winds up, after a pell-mell, scene and era-setting travelogue by claw, water and air over, under and through a fabulously realised pre-mankind realm, in the company of a tribe of lemurs. Adopted by these precocious, furry yatterers, Aladar, as he comes to be known becomes the much-loved but still lonely mascot-cum-protector of the tribe. But when a meteor-shower brings havoc, flame and destruction to their island paradise, Aladar (voiced by D.B. Sweeney) finds that he must lead the survivors across an ashen wasteland in search of a sanctuary that can support them. Narrowly avoiding the clutches of a vicious roving band of raptors - the distant relatives of today “hoodies”, perhaps - the teenage dinosaur and his diminutive surrogate family meet up with a slow-moving procession of desperate and disparate reptiles travelling in a thirst-torn caravan across the burned-to-soot desert on their way to a land of plenty far across the parched landscape. Led by a fiercely strong-willed and domineering brute called Kron (voiced with bitter conviction by Samuel E. Wright) with whom Aladar immediately becomes embroiled in a battle of wills, the hope-addled herd will have to overcome numerous obstacles in order to find peace, food and safety. Ravenous Carnataurs and those wily, gulp-rattling raptors dog them every energy-starved step of the way, and Aladar will have to dig deep into his soul to find the strength to keep his new-found friends together and able to complete the journey. Of course, discovering others of his kind - which he has never encountered before - is a driving factor. Not least because Kron's sister Neera (voiced by Julianna Margolies) provides something of a cute carrot dangling before him on the remorseless trek.

My original problems with the movie stemmed from the fact that I resented the way that the film switched from gloriously vibrant and, indeed, verdant life to blighted Mad Max-style wasteland, robbing, to my mind, the spectacle and wonder of the prehistoric world. A grievance that was purely aesthetic then - and also one that proved that I hadn't really paid any attention to the plot in the advance reviews. Of course, I can admit this lame-brained idiocy now and also reveal that I have grown to love and admire the movie over the ensuing years. My son virtually grew up with it and still watches it quite often, even preferring it to the much-more lauded and perennially popular Lion King trilogy. Viewing Dinosaur now, I appreciate that the starkness of the visuals during the main stretch of the film are actually the very elements that lend the story its atmosphere, reigning in the play-happy comedy and formula Disney shtick for a deeper, more urgent sense of character development, enforced no end by the continual adversity the dinosaurs face. This desolation serves to ram the individual personalities and their plight home to us in a way that would not have been possible if the frame was filled with colourful critters and intoxicating vistas to distract us from the main motivational thrust. In this respect the film is surprisingly and pleasantly mature. It would have been so easy for the studio to have made a bright, lush and cosy romp through the Pleistocene Age, just swapping their typical human heroes for cutesy dinos in search of a secret Garden of Eden. But the writers instead play it darker and not only fashion a tale that is ripe with egotism, dictatorship and a sense of strife and hardship that is really quite bleak to behold, but provide younger minds with a more realistic approach to problem solving, looking out for your friends and basic survival. I won't go all out and say that Dinosaur is a history lesson as such, although it certainly does introduce a few new animals to the repertoire than Jurassic Park and provide the genesis of why and how they may all have eventually died out. For, despite an excitable and satisfying pay-off come the finale, we can be left in no doubt that the end of their era has already been brought about and that the dust-cloud that will ultimately choke out their existence is already brewing over the horizon. Thus, Dinosaur is a sobering fantasy despite the typically happy ending that no self-respecting Disney movie could hope to avoid.

Quite a brave step for the House of Mouse, then.

The balance of fun versus fear is spot-on, as well. Flamboyant frivolities on Lemur Island - entailing chaotic courtship rituals for all the neighbourhood swingers and threat-free drills in escape and evasion courtesy of a testosterone-probing Aladar - are spun about-face when grisly Carnataurs set their sights on the ragtag menagerie of mobile snacks. And those hideous little Velociraptor-types scavenging on the fringe of the dustbowl are like a squad of heckling bullies. The standout sequences involving the Carnataurs sticking their demonic horned heads through the rain-lashed entrance of the cave and the pivotal face-off in the dead-end canyon are obvious moments of dread and terror, but the film plies its perpetual frisson of jeopardy with sightings of straggler's bones being picked clean on the horizon and Kron's systematic harassing of the herd and belligerent indifference to the suffering he is causing them. The clever thing is that Kron is actually still acting for the greater good of the ponderous convoy, even if it means whittling its numbers down just to get to the Promised Land. This is the survival of the fittest, when all said and done. You kind of have to wonder just how much he would relax his Hitler-ish mentality if he ever reached that paradise beyond the mountains, or would the herd, healthy and strong after a few weeks lounging in the lake and grazing in the meadows, seize their chance for some much-needed payback and do him in, en masse? The film may be easy to dismiss in the rush of Disney-fables - mythological and historical interpretations as well as bold, romantic fantasias - but it does supply a few nuggets of food for thought, just the same. I like the sense of doom that it carries for, even if it ends on a high-note, Dinosaur also activates a ticking time-bomb on its smiling heroes' longevity. Most kids won't pick up on that, of course, but I find its foreboding an eminently agreeable touch.

Sure the movie is like a prehistoric sandwich of Disney's The Lion King and Tarzan, but the setting and the narrative force a different perspective on things. To me, the film feels more serious and sombre. There might be lots of light relief along the way but the overriding impression is one of desperation. The coming-of-age arc that Simba and Tarzan have to undergo is no less a big deal than Aladar's, yet their worlds don't feel quite as threatening. I concede that both the afore-mentioned characters possess more charisma than Aladar who is, altogether, more innocent and shallow than either of them, but their environments are much chipper and far more welcoming in spite of the lurking dangers they may possess. Aladar and his chums have to battle the soul-destroying affliction of dwindling hope as well as the hostility that surrounds them and it is this aspect that makes Dinosaur a more astute and grimmer exercise.

The animation is also exemplary. Disney took the CG route to hitherto uncharted territory with this one and the results were breathtaking. Gone was the cartoonic quality of The Land Before Time etc, and in came the photo-realistic approach that brought us intricate facial movements, realistic breathing and well-worked-out muscle definition. Married up to comprehensively crafted backdrops and seamlessly integrated (for the time, at least) real world landscapes, Dinosaur marked a turning point for the studio and for what audiences expected from it. The rendering of lemur fur and limpid eyes, rainfall, dust-clouds and arid fissures is revelatory and provides a technological benchmark that CG animation would be forced to follow ever afterward. This type of film is exactly the sort of thing that the new high definition formats should give a new lease of life to - although Dinosaur, sadly, meets with mixed results ... but more on that in the relevant section.

But, another fine component that is certainly worthy of mention is the film's full-bodied and richly orchestrated score. James Newton Howard was a terrific choice of composer to have on board. Just listen to his work on Shyamalan's Signs, The Village and The Lady In The Water - the last two being truly inept films that I ended up despising, but rendered somewhat more palatable by his haunting scores. He would, of course, go on to find the musical soul of the primitive world and the beastly desire once again in Peter Jackson's King Kong , and his music for Dinosaur is beautiful, if a little less intricate, aggressive and emotional. Catchy, playful and exotic at times, dark, brooding and savage at others, his score is supremely benefited by not having to incorporate any of those dismal, easy-listening songs that Disney normally foist upon us. His main theme is gorgeous and lush and fully orchestral, swirling, uplifting and totally buoyant and infectious. His incidental pieces and action cues are driving, strong and full of vigour. Howard would also score the vastly underrated and really enjoyable Treasure Planet for Disney soon after to great effect as well ... despite that one having a few ditties in it!

So, all in all, Dinosaur is a much smarter film than many would have you believe. It is brave enough to embrace the dark side of life and death as well as provide the required clowning around. Yes, there are lots of talking animals, but their plight is as relevant to us as it was to the dinosaurs wandering the wastes in search of somewhere to call home. Disney gambled and ultimately lost with this experiment but that isn't a reflection of its time-honoured tale of love and redemption, or its concerted efforts to craft something new and vital in the scope of visual storytelling.

It may not be a classic, but Dinosaur remains a very worthwhile and entertainingly noble experience. And it knocks spots off Spielberg's The Lost World, that's for sure!