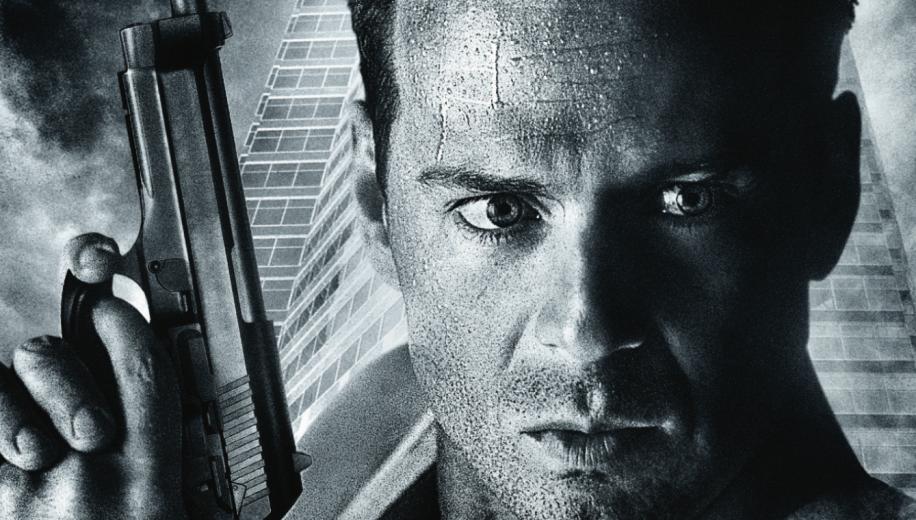 As a project, Die Hard spawned from the 1968 Frank Sinatra film, The Detective, which was based on a Roderick Thorp novel. The studio was contractually obliged to offer the sequel - 1979's Nothing Lasts Forever - to Sinatra who, over a decade later, was in his 70s and obviously passed on it. The sequel was originally rumoured to have been considered as a potential follow-up to Schwarzenegger's 1985 hit Commando.

Eventually - after being passed on by the likes of everyone from Clint Eastwood to Sylvester Stallone to Richard Gere and Harrison Ford - it ended up in the lap of TV's Moonlighting star Bruce Willis, then known only for his small-screen comedy. He would help turn the character of John McClane into a celebrated action icon. Borrowing the Studio's own Fox Plaza to serve as the distinctive setting, and casting the late Alan Rickman in his first big film, John McTiernan, fresh off his success with the equally iconic Predator, would ensure that the rest was history.

Although its lead character and his simple 'wrong place, wrong time' motto would veer towards parody fifth time around, this first film is an exercise in expert action blockbuster filmmaking. McTiernan finds the perfect blend of charismatic performances, a truly quote-worthy script and a lean and efficient story, stylish cinematography, a classic score, and some very memorable action set-pieces.

Redefining the genre with its concept of everyman heroes, from the barefoot intro to the first villainous displays of menace, the ventilation shaft monologue to the defensive measures against the LAPD and FBI, the broken glass scene to jumping off the exploding building, this is action gold and the best alternate Christmas movie of all time. Though McTiernan bottled lightning for the second sequel, Willis eventually succumbed to the laws of diminishing returns. Nevertheless, the original Die Hard remains a cracking all-time action classic.

Die Hard was already given a new 25th Anniversary Blu-ray release, but, to the dismay of its fans, this didn't actually involve anything new, with the video presentation dating back to the old original Blu-rays cut from masters more than a decade old. Whilst, at the time, they were reasonably well-received - particularly if seen through the lens of them being a jaw-dropping upgrade over the old DVD - five years ago people were crying out for remasters, at least for the first three movies, if not just the first film alone.

Thankfully the wait was worth it, as the film's debut Ultra HD Blu-ray release is (much like the recent Gladiator 4K) full-fate native 4K, almost certainly struck from a newly-minted 4K remaster given that the Blu-rays were sourced from mere 2K scans, and looking all the better for it.


Easily the highlight of the new disc

The image retains a sharpness and precision that sets new standards for the film, leaving it the best it has ever looked, opening up new pockets of detail through tweaked contrast and that all-too important implementation of HDR and WCG. Facial detail is impressive, with no signs of waxy over-application of noise-reduction, and none of the clean-cut Terminator 2 4K controversy even, retaining (or, more accurately, reapplying) a fine layer of natural grain to lend further texture to the piece. HDR and WCG also allow the reasonably plentiful explosions further range, blossoming out into spectacular highlights, whilst bullets - and sparks - fly with flame-twinged excellence.

From the LA skyline (tequila sunrise orange) to the shiny Nakatomi Plaza, to all the early lens-flare-style shots, Die Hard has simply never looked this good, and with solid blacks that seldom dip into anything which could be mistaken for dark grey rounding out the presentation, it's easily the highlight of the new disc.

Fans might have hoped for an immersive 3D audio upgrade in the form of Dolby Atmos or DTS:X, but unfortunately Die Hard has to contend with a conventional DTS-HD Master Audio 5.1 track instead, which makes for a slightly reserved offering, but still makes for a solid accompaniment if you allow for the film's vintage, delivering the key elements of dialogue, effects and score within the reasonably faithful adherence to the feature's original 4-track sound design.

Lacking any real standout moments in terms of effects coverage, rear surround usage, or room-shaking LFE usage, it's still a serviceable offering, at its best when championing the memorable score. Dialogue remains core to the proceedings, and retains priority for the most part, whilst effects bring the claustrophobic setting to life, rife with breaking glass, frequent bouts of heavy-duty gunfire and a salvo of explosions peppered across the piece (all replete with the inherent, aforementioned, limitations of the era).

It would be all too easy to compare - and dismiss - it against modern blockbuster offerings, but this 30 year old flick is better reflected upon in comparison to its peers of the time, and as such is a respectful, faithful rendition, even if many would undoubtedly argue that it is long overdue an immersive audio makeover.

No new extras, with the UHD sporting the old Commentaries, and the accompanying BD a few news reel clips and some publicity material

Whilst the celebration of Die Hard's 30th Anniversary gets off to a good start with the film's 4K Ultra HD Blu-ray bow, this is soon tempered by the lack of 3D audio, and lack of new extras. That said, the impressive native 4K presentation is probably more than enough reason alone to pick this title up, one of a number of all-time classics (following on from last month's Gladiator 4K release) which are making their 4K Ultra HD Blu-ray debut this year.