Did You Hear About the Morgans? Movie Review 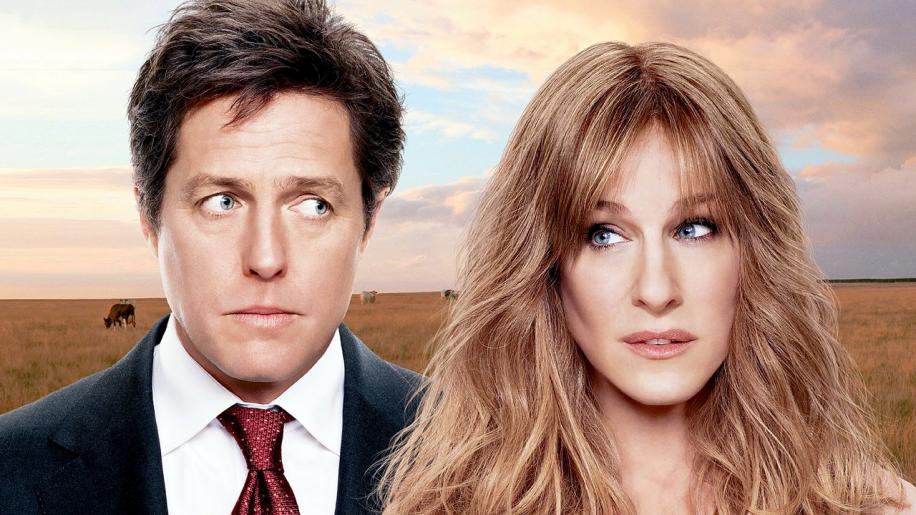 Unbelievably, folks, I actually asked for this title to review when it cropped up! The truth is, I do derive some amusement from Hugh Grant and, as my wife will testify, if one of his films appears on TV you can bet that I'll be there in front of it, quietly and unashamedly enjoying his stammering embarrassments, farcical situational dilemmas and refined twit-timing. In fact, over Christmas 2009, there didn't seem to be a single night that wasn't showing Four Weddings, Love Actually, Notting Hill or Music And Lyrics on some channel or other - and I think I may have caught each and every late night broadcast.

There is something reassuring about his upper-class misfortunes in love and his endlessly faltering verbal escapades have red-cheeked charm all over them. But he's getting older now and this ceaseless pattern of foppish dementia is wearing exceptionally thin. I recall seeing the trailer for this film at the flicks and thinking, at the time, he's gone too far with this act, but I was willing to sit through the same old shtick one more time. And it was a mistake ... because Did You Hear About The Morgans? is a thoroughly lousy, staggeringly miscast and utterly lightweight comedy-drama that checks-in every conceivable laugh at the front desk and meanders through an increasingly snooze-inducing series of encounters and set-pieces until a painfully sugary climax that is designer-made for all those forty-somethings who miss Friends and can't wait for Sex And The City 2.

Successful New Yorkers Paul and Meryl Morgan (Hugh Grant - a successful New Yorker! - and Sarah Jessica Parker) are struggling to repair their ailing marriage ... well, Paul is, as he believes that they can still make it ... when that typical relationship obstacle, witnessing a high-profile murder, threatens to strain things even more, especially when the squabbling couple are then forced to enter into the Witness Protection Program. Together. In Wyoming. There's a killer still on the loose and out gunning for them, and the Morgans are left in the charge of cowboy Marshals, Emma and Clay Wheeler, played by Mary Steenburgen and, who else but Sam Elliott. So, all aboard this “delightful comedy” for observational humour (chuckle as husband and wife argue over past infidelities, and at the dumbest, but cutest doctor's receptionist in the world), situational comedy (guffaw as a bear-repellent spray is squirted anywhere other than at the bear), slapstick (clutch your sides as the plucky Morgans hide from the killer inside a pantomime cow at the local rodeo) and wry, sardonic character-based witticisms (erm ... no, sorry, there's none of that, come to think of it). But cringe at the sight of two “popular” stars worming their way uncomfortably through a pathetic charade of marital point-scoring as their city-ways conflict with the customs of the Stetson-wearing bumpkins. Shy-away from the crass attempts that both make in the categories labelled “Tender” and “Compassionate” and “Romantic”. And duck down from the career/charisma implosion that Hugh Grant seems hell-bent on making by appearing in such gossamer-thin mediocrity.

Marc Lawrence's film is neither funny, exciting, involving nor even mildly interesting. Even the risible likes of the recent Dear John probably has more originality in it than this boring, formulaic attempt to marry American sarcasm with English wit in the great outdoors. It isn't even Wyoming ... it's New Mexico.

This desert of mirth falls back on too many obvious stereotypes, yet even manages to make such guaranteed stand-bys as an attack by a grizzly bear, some horse-riding buffoonery, impromptu target practice and clumsy hamfistedness with an axe about as much fun as trapping your dangly bits in your zip. And although it is wonderful to see that The Thing's own Dr. Blair, Wilford Brimley, is still alive and kicking, it is unfortunate to witness him in filmic flotsam such as this.

Grant is totally miscast. Just to get him on board, it seems obvious that his lawyer character was hurriedly given an Brit-overseas makeover. Considering that this is ostensibly a story about cultural differences, you would have thought that a great deal more would have been made of this English fish-out-water scenario. But all we get is the throwaway sneer of “Tea-drinker!” from an appreciably abrupt Brimley. Admittedly, this was never meant to be anything other than disposable fun, but some effort with the essential “humour” could have been made, couldn't it? As is stands, this is just too bland and contrived to be anything other than tedious. And Parker is as brittle and lifeless as ever. Sex And The City is awesome - I don't dispute that. But you take that girl out of the city, as this film is at pains to do, and she becomes a personality vaccuum and a comedic damp squib.

And she's hideous, as well, which plays havoc with such otherwise breathtaking scenery. The beautiful unpolluted starry canopy above the hideaway ranch is sullied by the SJP's snout whinnying across it as she and Grant wax lyrical about their rekindling amour. The lush rolling meadows and tracks over majestic ridge-lines (right beside the visitor centres, of course) become tainted with the bonding-by-jogging sessions that our oddball couple indulge in. She even looks like the damn thing we see her attempting to milk at one point! When the best thing in a movie is the footage from Dirty Harry playing on the Wheelers' DVD, my advice is to quit watching that movie and to shove the full Dirty Harry on instead.

Even the likes of the otherwise highly unlikely Music And Lyrics, which was easily the worst of the Grantster's canon, pre-Morgans, had encounters aplenty and lots of little sub-plots and asides that generated some form of momentum and a pay-off that actually delivered. This just saddles up for a ride through the fields of abject banality and doesn't even have the decency to gallop.

But out of all of this mess, two things shine. Sam Elliott (simply the greatest living cowboy) does exactly what Sam Elliott always does. He emotes with a voice like the sound of a thousand buffalo stampeding over the bones of Custer's 7th Cavalry, from beneath a moustache that can be seen from space and seems to be enduring the simpering repartee from the two leads with all the stoicism that he can muster. We only have to put up with a couple of hours of them - he had to spend weeks on the set with them! But what possessed him to get that ludicrous haircut? And Mary Steenburgen as his rifle-toting, wood-chopping, down-to-earth missus. God bless Mary Steenburgen! Man, this woman looks hot in those jeans and boots and hefting an axe! MILF gold, the 'burgen was possibly the only reason that I kept my eyes open during this yawn-fest. The odd thing is that I've never really paid her any attention in films before now. Mind you, I don't think she's ever been given a role that she can claim as entirely her own, and it certainly seems a shame that her best opportunity comes in featherlite dross like this. Then again, I'm getting older, so ... well, you figure it out. And, hey, compared to the horse-snouted SJP, even the panto-cow was more desirable, so it was nice to have something to oggle at.

Frankly, this old flannel was flawed right from the screenplay stage, which means that poor Marc Lawrence has to take a lot of the flak for it since he wrote this garbage as well as directing it. Just where is the crucial dynamic between Paul and Meryl? Their marriage is on the rocks (apparently) due to Paul's irresponsible one-night-stand in LA (I mean ... who hasn't, eh?), but the two are still clearly in love and Paul is prepared to do his utmost to keep them together. Would it not have been a lot more dramatic to have the couple totally at each other's throats and only meeting up in the first place in order to thrash out some desperate divorce settlement when they spy the murderer in action? This then would have given us a decent set-up for their eventual reconciliation and re-blossoming love affair. It would be no less predictable, in the long run, but it would have provided something a little more tangible for their sparring to have revolved around, a bit more bite to their arguments. With the couple still horribly amicable to begin with, the narrative falls back upon the old cliché of the third-act revelation that traditionally threatens to unravel all the re-knitted romance that they've worked so effortlessly to attain. But this development is so ridiculously under-played that you could be forgiven for not noticing it at all. When your two main characters have little or no wedge to overcome, what, pray tell, is the point of sticking with them to see how things pan out? And let's not even get into the eye-rollingly bad boy/girl double-act of bubble-headed personal assistants that the undercover-lovers have left behind in the Big Apple!

Although this is squarely aimed at the rom-com crowd, you get the feeling that Lawrence would also like this to appeal to those who enjoyed Midnight Run, Silver Streak and all those other tongue-in-cheek situational thrillers that have come along. But the strictly by-the-numbers ruthless assassin angle comes over with much less danger or drama than even CITV could muster. And although you are literally screaming for Michael Kelly's follicle-challenged killer to hand his weapons over to us so that we can drill a few holes in the hapless heroes, he is no more threatening than the third henchman from the left in any single A-Team episode you care to mention. I swear to God, the cops and the Feds know exactly who this international hit-man is and have enough evidence on him anyway - so why would he even be bothered going after the Morgans? Mind you, even the great Jason Bourne can flit from country to country under false names and passports, yet look absolutely identical to the same Jason Bourne that everybody is on the look-out for ... so, hey, we'll let this contrivance pass.

Folks, I cannot think of anything else to say about this lacklustre venture into Hollywood's honey-pot of light entertainment, other than to warn you against forking out for it. If you have a wife or a girlfriend who loves this sort of thing and you feel that they may enjoy it ... then ditch them. My own wife (we won't talk about the girlfriend!) has the dubious honour of being able to mock me about watching it. And, coming off the back of that Yuletide Grant-athon, this doesn't put me in a good place. But this is the sort of heroic sacrifice that I am willing to make on behalf of the forum.

Did You Hear About The Morgans?

No? Good. Try and keep it that way.