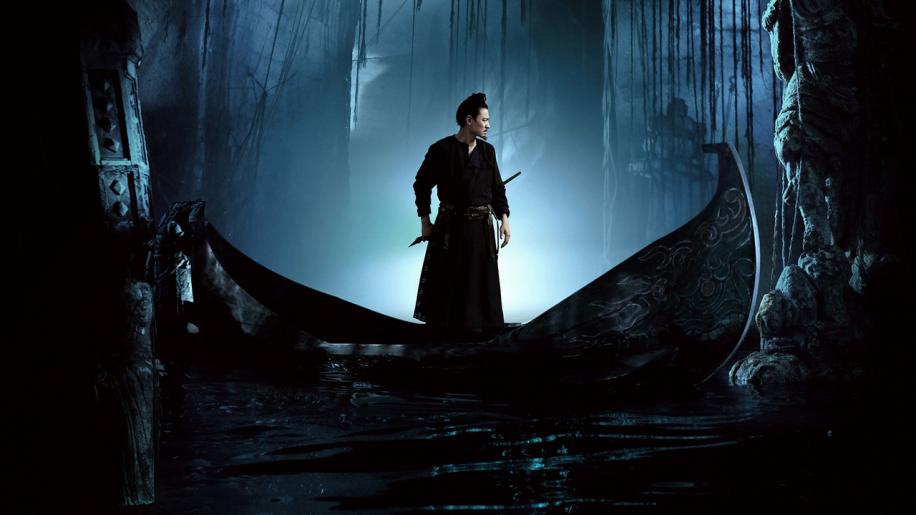 Tsui Hark’s reputation took a bit of a hit after he gained worldwide acclaim as an asset of the action genre. It has been hard for fans of such works as the Once Upon a Time in China series (of films that is, not the TV show!) to see a figure who hit the heights of Hong Kong cinema, sailing to the top of the pile with consummate style, take a face-first dive back down the mountainside of popularity he had built; to be found spitting his teeth out at the bottom making mediocre movies. How anyone can reassert their artistic integrity having followed up a frenetic blaze of bloody swordplay carnage as in The Blade with a Van Damme vehicle like Double Team I’ll never know. The very words “co-starring Dennis Rodman” still send shivers down the collective spine of Hark’s fans, and this shift would prove hard even for those who can forgive the occasional flirtation with downmarket American filmmaking (following the school of thought that if Woo can do it, anyone can) from their Eastern icons to defend. Thankfully, in recent years he’s been building the goodwill with his followers once again, both Triangle and Seven Swords showed glimpses of the type of taut pacing and eye for heightening tension that brought him so much acclaim.

With Detective Dee and the Mystery of the Phantom Flame (surely a mouthful of a title that would indicate a further series of films?) being loosely based on the life of a Chinese folk-hero, the omens are good given Hark’s track record for bringing that other titan of Chinese semi-mythology – Wong Fei-Hung – to the screen. The figure himself was popularised in the minds of many (certainly in the West) thanks to the works of Robert Van Gulik who translated the eighteenth century Chinese detective story Celebrated Cases of Judge Dee and then proceeded to continue with a line of his own fictional stories centring around Dee. In this instance we find the imprisoned Dee being reinstated by the Empress whose ascension he rallied against in order to solve a mysterious set of deaths that are threatening to derail the inaugural ceremony of the very same Empress Wu.

Straight away you can tell that money has been spent on this, it may not be Hollywood blockbuster calibre, but the considerable amount of CG imagery, paired with the lavish set design and costumery combine to make a good first impression of a vision that is set to have some considerable scale to it. Taking the lead role is Andy Lau (Infernal Affairs), always a good choice and someone who has consistently shown himself to be the Swiss army knife of Hong Kong cinema. Here he is tasked with impacting the impression of a Holmesian perception for detection and fluidly melding such a level of gravitas and enigmatic charm with an ability to pull off gravity-defying wu-shu moves in the blink of an eye. Aiding him in his pursuit of bringing these two seemingly disparate halves of his character together is Sammo Hung, performing the role of action director. So with a director who lost a certain edge and knack for the cinematic excellence he had found success with perhaps deviating to being back on track (though his choice of subsequent subject material following a hit often makes him seem as reliable as British Rail in that respect), an ever dependable lead actor and a true kung-fu legend choreographing the fisticuffs surely the end product will satisfy?

Well the scale, as mentioned, certainly pulls you into the world of Tang Dynasty courts and protocols. Everything revolves around the Coronation of Empress Wu and, as with Hark’s best films, an air of tension is soon established. The material may be obviously lighter than the nihilistic visions that helped make his name such as A Better Tomorrow , the score by Peter Kam (Reign of Assassins, The Warlords, Isabella) seeps through and forms an underlying layer of unease in the right places as well as bringing a satisfying swell to pomp and privilege at the Royal Court. No sooner have we been given a tour around the towering structure of the giant Buddha statue that overlooks the palace than a man ignites like an impromptu human sparkler, the effect being just nicely on the more safe side, but the burning flesh and smoke billowing lungs lend a touch of edge to a film that could otherwise fall too squarely into family territory.

Far from being a straight mystery, the motley cast of characters, which includes a Royal aide, an albino detective, a one-armed foreman, a chaplain capable of using animals to project his voice and someone called Donkey Wang (no sniggering at the back please!), are interwoven into a wider tale of politics. The instatement of a female Emperor has sent ripples throughout Chinaand on the road to power she has amassed many enemies. Several mysteries build and suspicions are cast in every direction as rivals vie for power and attempts are made upon Dee’s life. There are all the usual traits of a good detective story, poison, double crosses, secret identities, but with the added bonus of more than a liberal coating of Chinese mythological weirdness. On the one hand this moulds an atmosphere of the fantastical and diverts attention away from the real issues, in a classic sleight of hand that all good whodunits employ. However, the “Macguffin” trick could be seen to undermine the very real, and solid, elements that have otherwise been cemented into place. It is hard to navigate your way through a genuine mystery when the sneaking suspicion lies at the back of your mind that, given they’ve already employed a man/deer quasi ventriloquist act, the answer to the conundrum may not be entirely fair to reasoned minds. It is hard for me to comment on this too much, however the tightrope act of balancing logic and the mystical is well handled but for a few absurdist moments and Hark constantly brings the weird and wonderful into play only when they have a firm foundation within the story, thus merely bending and adorning the enigma rather than undermining it and so proving detrimental to the credibility of the central themes.

The great surprise of Detective Dee and the Mystery of the Phantom Flame comes in the form of the action itself. Sammo Hung has been around for what seems almost as long as the industry itself and though some of the films/TV shows he’s been involved with haven’t been Golden Globe worthy, the fight choreography he’s implemented has rarely been sub-par. With this film we see the dangers of employing one of the great action directors and throwing too much CG additions and slow-motion. His best work is grounded, usually wing chun based, but here there is a notable lack of gravity. I don’t simply mean that leaps are too pronounced as that is an artistic choice, but the hits themselves seem without significant impact and when weapons are produced they look far too light. One character wields a whip, and the constant use of slowed footage for this fairly poorly rendered computer generated addition is excessive and detracts from any real rhythm that had previously been built up to the point of the action set-piece. The lighting in such shots also loses any great filmic quality as the live action and CG is interwoven, with such lighting never being adequately replicated.

Detective Dee and the Mystery of the Phantom Flame works, but not in the manner that you might expect. Many, myself included, expected perhaps another misstep from Hark, with the material being too light and the respite and salve to this proving to be the Sammo Hung choreographed fisticuffs. Instead what we have is a fairly taut mystery thriller with some throwaway fight scenes. The air of magical mythology and intriguing whodunit atmosphere fill the void and Lau brings with him enough gravitas, often having little more to work with than sideways glances and contemplative looks, to make even the more outlandish scenes eminently viewable. Fairly family friendly, absurdist and with just enough edge, it fits into Hark’s recent canon quite well and continues his stuttering run back to form.