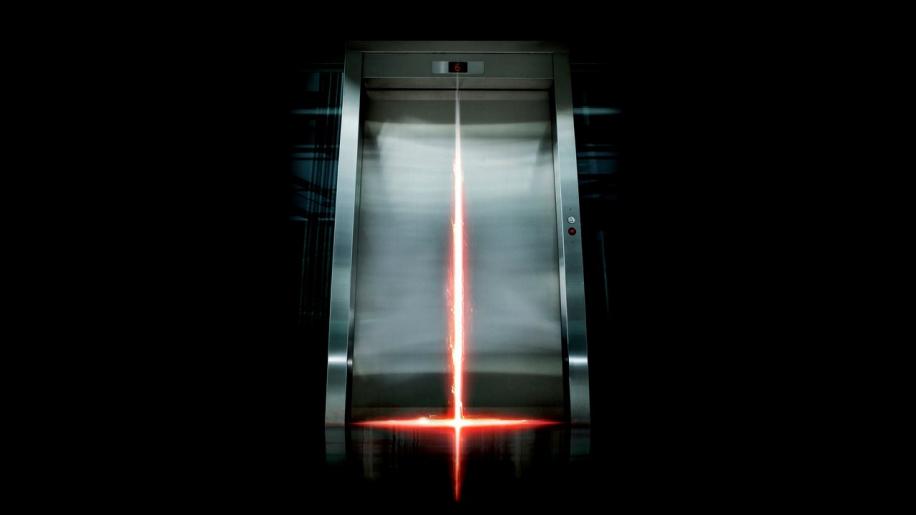 Devil– now that’s a cracking name for a film. No fannying about with complexities or subtle metaphors like Angel Heart, no ancient Biblical overtones like End of Days or merely alluding to the impending dread as with The Omen. Nobody’s going to see the poster or pick the disc off the shelf at Blockbuster, quizzically stare at it and ask themselves “what’s that about then?”. In terms of bluntness it surely ranks up there with Snakes on a Plane in following the Ronseal school of titling – it does exactly what it says on the tin. In case you were wondering, it is indeed simply about the Devil (though they’ve stylishly lost the “the” from Old Nick’s full title, which obviously makes it catchier).

If the name of the film were a textbook lesson of slapping your audience with the obvious, the (possibly intentionally) misleading tagline is anything but. To emblazon all manner of promotional material with “From the mind of M. Night Shyamalan” piques interest in a manner that is unbefitting, as the term “from the mind of” in this case is used to indicate the hit-and-miss Hitchcock-in-his-own-imagining director’s involvement, but to what extent is never fully clear – the story originates with him, but that could range from a partially written script to a thought he happened upon whilst sat on the porcelain throne. Fans will no doubt fly to the box like unsuspecting moths to the flame of a career slowly ebbing into mediocre suspense stories, but Devil is to form part of The Night Chronicles. Billed as a trilogy of modern supernatural tales, they are gearing up to potentially be just ideas of Shyamalan’s, farmed out to other directors to bring to fruition. Still, with the man’s output having been on a steady decline since 2000’s Unbreakable, surely culminating in last year’s The Last Airbender (which still sounds like a childish insult from the non-PC days of the eighties), perhaps that is no bad thing. The man roped in to take the helm is John Erick Dowdle who made a reasonable fist of remaking the excellent Spanish zombie thriller Rec for American audiences in the shape of Quarantine. And with scripting duties falling to Brian Nelson, responsible for the immensely uncomfortable watch that was the paedo-baiting Hard Candy, as well as having a credit on 30 Days of Night, the team assembled is not without potential.

The crux though, and what most of this optimism rests upon, is the story itself. So, what did Shyamalan deem interesting enough to kick start an entire trilogy of tales that are to stop hearts and leave fingernail indents in the armrests of odiferous cinema seats up and down the country? Simple – five people get trapped in an elevator and one of them is the Devil. It’s simple, intriguing and has all the hallmarks of a high-concept idea that may well lack any substance whatsoever. Throw in a cop trying to get them out and you’ve got yourself a film. The opening credits display a well choreographed upside-down shot of a city skyline that helps build a sense of scale, structures that dwarf the individual, as well as disorienting the viewer and creating a general sense of unease. This skewed vision, as well as many other subtle visual touches, thanks to many-time Shyamalan collaborator cinematographer Tak Fujimoto, help to cement the aura that this is by no means simply a cheap money-spinner, it has a level of polish that raises hopes for the narrative itself.

Unfortunately, that hope is quite quickly dashed – literally. The miserly 80 minutes run-time has a profound knock on effect on the ability of the film to convey that feeling that is so necessary to every decent diabolical tale – creeping suspense that rises to ominous terror. No sooner have the credits finished then the first big bang is upon us – the standard, hackneyed use of silence followed by a seat-jumping noise is clichéd enough, but to accompany it by the scene of a worker, oblivious, unable to hear the calamity whilst sharing the same frame is by-the-book to say the least. It may be effective in the moment, but it is profoundly unimaginative and serves only to set up expectations for further articles from the suspense-chiller manual to be trotted out, and don’t worry because you won’t have to tarry long.

After a while, those familiar with the better offering the genre has to serve up may want to tick off the pieces required to make a direct-by-numbers chiller: Written Biblical verse - check. Childhood story of the supernatural - check (bonus points for narrating it to the audience). Religious individual all too eager to believe oddities are the work of a malevolent force - check (further Brownie points for not attributing this characteristic to a WASP). Killable cast we never really care about - check. Silence followed by loud bangs - check. A scene where some poor soul is obviously likely to expire due to some lax safety procedure but gets an unlikely reprieve - check. Another similar scene where their luck runs out - check. And finally, the biggest of all absolute necessities, a backstory for your main character that is shoehorned into too many scenes to be irrelevant, illuminating the path for any potential narrative twists like a lighthouse. The last of which is so hard to overlook because it looms into view in the first scene like the mothership from Independence Day and never recedes enough into the background. The minimal amount of minutes that is given to the story makes it nigh-on impossible for asides or irrelevancies, as such anything that is on-screen is always likely to be pertinent and raise its head again later on.

Some may be able to ignore these criticisms, watch blithely and erase any thought that the story is likely to try a few twists and turns to throw them, but the manner in which the narrative is set-out, and the early discoveries of characters’ shady pasts, only serves to reinforce the mindset in an audience that anything and everything is going to be incorporated into the story somehow. Like a sub-standard Saw (the original film itself, not the dead-horse flogging series), the intention was to create a claustrophobic space (and to be fair you can’t get more cramped than a lift), reveal the back-stories of those involved, interweave where necessary and infuse an element of the supernatural. But once again, mainly due to the shortened nature of the feature, no sooner have you met the key cast than they are popping their clogs. The ways in which someone can die in a lift are limited, and when there is little sense of adventure in the killings in such a film, a certain part of your audience will always drift into boredom.

One by one those trapped die, and although Shyamalan has been decent enough to give a thankful nod towards the work of Agatha Christie, things follow the format of Ten Little Indians/And Then There Were None all too closely in the resolution. Extremely formulaic and with so little flesh on the characters that they themselves could be considered skeletally scary, Devil borrows heavily from far better films, throws in an intriguing supernatural slant, but is hobbled by its meagre run-time and as such fails to give the audience anything intelligent or original to grapple with. If the Devil is in the detail, this is merely a précis of a diabolical thriller.