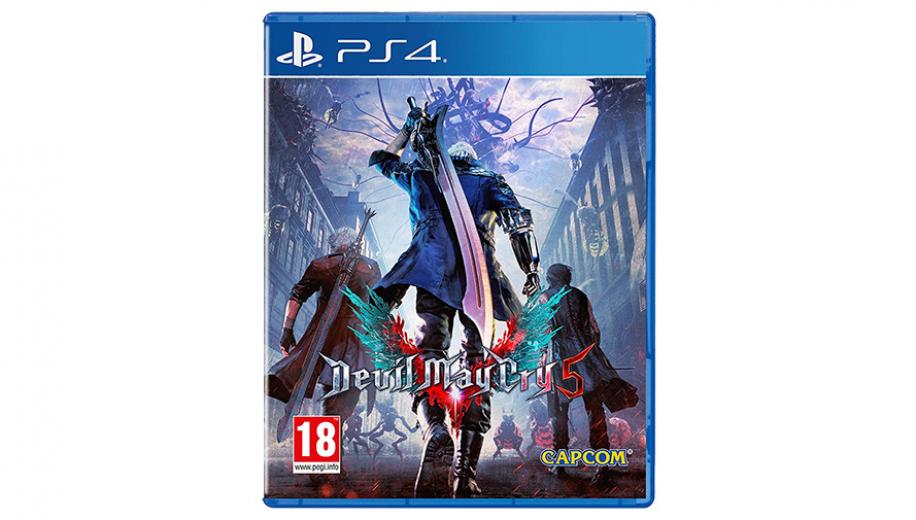 'Style over substance' is a complaint you'll hear about a lot of games, but you'll sure as hell never hear it used to describe Devil May Cry. Here, the two concepts are not weighted unequally, but rather completely symbiotic – the style is the substance, with a gameplay loop that marries the two beautifully. It might look to the untrained eye like another hack-and-slash game, but the series' ever-present grading system keeps track of how you mix up your abilities and perform tricky moves during combat, in turn rewarding skilled play with more Orbs which can be used to enhance abilities or purchase new ones to let you get ever more crazy with your combos.

Performing well gives you the tools to perform even better, as well as more stages on which to do it by introducing increasingly challenging new difficulty settings as you prove your mastery of the previous one. It's proven to be an amazingly rewarding cycle when done right, and we can tell you right now that Devil May Cry 5 does it absolutely right. Almost perfectly, some might say.


Performing well gives you the tools to perform even better

Devil May Cry has let us play as characters other than Dante in the past, but there's usually been some kind of caveat in effect. Trish, Lady and Vergil have all been playable in Special Editions of previous games, but typically just encounter the same enemies and areas as in the main game; Dante's missions in the latter half of DMC4 were effectively just retreads of the Nero ones that came before them; DMC2 gave Lucia her own separate campaign on its own disc, but unfortunately, it was Devil May Cry 2. In DMC5, the flow of missions is geared around having three characters.

Most of the 20 missions designate one of the three to be the star in order to provide the best stage to showcase their abilities, although there are a few levels where you get to pick who to use at the beginning. The missions with fixed characters often tie into one for another character, and you'll often catch a glimpse of an ally going to town on enemies in a nearby area via the Cameo system – an interesting inclusion that casts other players as these characters via either replay data of live play if they happen to be doing the related mission at that time. It's novel and unintrusive if perhaps not entirely fleshed out, as you're asked to rate these other performances at the end of the mission even though you might only see them in action for a matter of seconds. For a game where style is everything, showing off for an audience like this can, and absolutely should, be made more of. The original Devil May Cry started out as an action prototype using Resident Evil assets, so it's interesting to see the series come full circle and borrow from RE again almost 20 years later. RE Engine produces some truly amazing results and its versatility continues to blow us away, from the first-person horror of RE7 to the over-the-shoulder RE2 viewpoint, and now to show off Dante and friends smacking demons around in all manner of weird and wonderful locations. The game pelts along at 60fps even when the screen is exploding with effects, particularly noticeable during V gameplay, with the new guy's three familiars all setting off insane effects independently of one another.

In-game visuals are exquisite but cutscenes – all rendered in-engine in real time - are next level, with some of the best character models and hair effects you'll find this side of a Naughty Dog game. These cutscenes are also often utterly ridiculous in the best possible way, something of a staple for the series since DMC3's world-class bar brawl intro scene. Nero gets to trash-talk demon lords while effortlessly dodging their angry retorts, Dante shows off some mean riding skills on a possessed chainsaw motorbike, and weaponsmith Nico often manages to get her van to do some seriously impressive off-road exploration. Very daft, sure, but it's a lot of fun, and much of what you see in these sequences can even be recreated in-game in some capacity.

Level design is fairly typical for the genre, with largely linear play areas that are frequently gated off until all enemies have been vanquished. Exploration, where possible, is encouraged with hidden treasures and secret missions, although the series still carries a lot of its old-school baggage like invisible walls and finicky platforming that can make searching out these extras a bit of a pain. Most stages culminate in a boss battle after having you run a gauntlet of regular enemies, and some of these are absolutely top-tier for the genre. We won't name any names so as not to spoil anything, but a few will be familiar to series veterans, even if the fights themselves play out completely differently. There's a good chance that a few of these will give you trouble the first time you encounter them, but the continue system is more user-friendly than ever.

There are more free Gold Orbs up for grabs for full on-the-spot revives upon failure, plus you can also now pay with Red Orbs earned during play to get up with at least a little health (depending on how rich you are, maybe more) and avoid being cast back to the start of the mission. Revival like this will eat into your grading at the end of a level, but often, the experience garnered in the process will be enough to get you through the mission in one piece next time.

In any case, this greater tolerance for failure allows the game to do away with consumable items for the first time and that works wonders to keep the action flowing. Health and Devil Trigger top-ups during levels are a little more frequent as well to help offset this omission, but at least you no longer have an inventory packed with items you'll never use because doing so would cripple your grade, as in previous games in the series. Each of the three characters has their own totally unique play style. You start as Nero, whose main tools are a sword that can be revved up to increase damage and a set of interchangeable prosthetic arms that all grant access to different skills. He's the simplest of the three but still takes skill to play at a decent level, since perfectly timed sword revs can massively boost your damage and style rating and taking hits while using his Devil Breaker arm effects destroys the arm, rendering it useless.

Next, you meet V, a brand new character who attacks using summoned demons. Where Nero is more a timing-based character, V relies on positioning – while he only directly engages in combat to deal the finishing blow to weakened enemies, he still needs to duck in and out of the action to keep his pets' health topped up and to reposition them to use their many special attacks. It's pure chaos to watch but after a few missions, you should feel like you're in full control of the action, no matter how crazy it may get.

Finally, it's Dante's turn, and time to put together everything you've learned so far, and then some. Dante's gimmick is hot-swapping, with four unique fighting styles that can be switched at will, as well as up to four melee and four ranged weapons to cycle through. It's pretty daunting at first to have so many options available to you – considerably more than the other two characters combined – but you'll slowly get a feel for it, learning when to switch to Royal Guard to deftly parry an incoming blow, flick over to Swordmaster for a meaty counter combo into a launcher, then swap weapons mid-air to keep the combo going for longer and get ever closer to that super-satisfying SSS style rank. The depth of Dante's systems is phenomenal and the potential for custom combos near bottomless, making the series' ageing poster boy the clear star of the show.


The depth of Dante's systems is phenomenal

DMC5 is incredibly generous with the Orbs needed to unlock new skills, but it kind of needs to be with just how many there are across three whole character move sets. You're presented with two difficulty options out of the gate – Human is basically Easy mode with weaker enemies, while Devil Hunter is effectively Normal and recommended for most players with any experience of action games.

Beating the game unlocks Son Of Sparda difficulty, which completely remixes enemy placement (expect to see endgame foes in the first few levels, and in greater numbers) and even adds in a few cool new features as well, and beating that gets you Dante Must Die mode, a gruelling slog where enemies hit like trucks and your skills are truly put to the test. Because of how much each mode changes things up and how much more power you have at your disposal by the time you reach them, every playthrough feels fresh and different to the last, plus completionists will want to duck back into select missions to work on getting S ranks on everything. It's a game about self-improvement, so ticking off all those boxes really does feel good. Keep getting better, and keep diving back in to missions you previously struggled with to prove it.

Capcom has been absolutely on fire lately, and Devil May Cry 5 is just the latest in its growing string of modern triumphs. It diverges little from the classic DMC template, but that's for the best – 3 and 4 remain two of the best games in the genre and it'd be foolish to throw away what made them so fantastic. Instead, DMC5 builds upon those foundations by adding new play styles and options for each of its main characters, while streamlining some old mechanics to make the series feel as at home today as it ever did.

There's even a handy catch-up video right on the front end for anyone looking to get into devil hunting for the first time, meaning anyone can jump in without missing out on too much... except some of the greatest games ever made, and Devil May Cry 2. Bayonetta has been queen of the character action genre for long enough now – the king has returned, and he wants his crown back. We say give it to him.