The yellow hue comes to mobile! 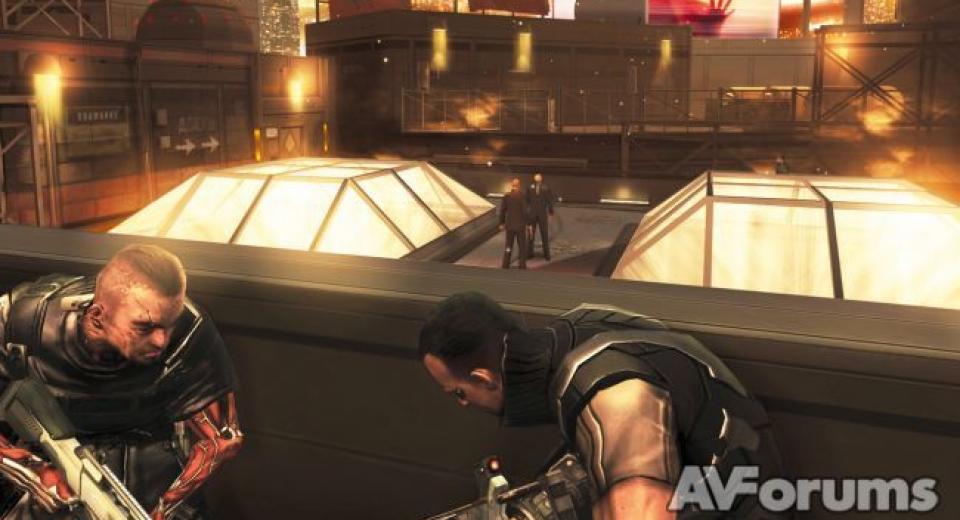 For some time now there has been an on-going discussion (possibly a heated debate) about how Deus Ex: Human Revolution should be played. There are those who think it should be an all-out gunfight, whilst others believe it’s a full on stealth-‘em-up. Personally, I found a balance between the two resulted in the best experience; certain sections required cunning and craft whilst there was also call for a good old gunfight.

Human Revolution (HR) proved to be a great new outing in the Deus Ex series after a hiatus for quite some time. Its art style and well-written script has ensured it will probably go down as one of the greatest titles of this generation. As such a spin-off novel, Icarus Effect, was written and now Deus Ex: The Fall is available on iOS (Android version to follow) which is part of the same story. Apple’s mobile devices now provide a capable platform for gaming on the go and pose a real threat to consoles such as the 3DS and Vita. Their prowess is being shown through compatibility with next gen consoles and integration with multiplayer titles and social interaction. Because of this, more and more titles are being launched to mobile gamers as they are available on a wide range of devices.

What’s more, their power is allowing for games to push the devices to their limits and let them flex their muscles in the gaming industry, which is evident in The Fall. Despite not being a straight port of Human Revolution, you could be mistaken for thinking so at a passing glance. The yellowy hue and glow remains and looks great on the high res screen, whilst the rest of the game follows suit. Of course it’s nowhere near as detailed as its console brethren but amazingly it’s not a million miles away.

The majority of the mechanics and features have been retained, which is no bad thing as HR was quite the polished title all round. There are certain instances where Deus Ex is suited to touch controls such as the hacking mechanic, using the upgrade menu and, surprisingly, moving and navigating. You are free to decide how you wish to control lead man, Ben Saxon. You can use virtual controls to guide your view and movements or you can use the tap-to-move feature, which makes more sense when precise navigation is in order. What is for certain is that this game is definitely not suited to an all guns blazing approach given the touch controls. When things get a bit hectic on screen it’s very easy to get in a muddle with the controls and inevitably end up a pile of bits on the floor. Should you take time to move into a good position and take out your targets then you’ll find it much easier, as you will if you stealth around the place too. Again, the argument will rage on as to which is the ‘true’ way to tackle the game but the choice is ultimately yours.

As Saxon, you tackle missions in Panama City looking for the anti-rejection drug Neuropozyne much like Jensen in the console title, tying the stories together albeit loosely. Saxon has also just freshly resigned from the Tyrants which again adds to the twists and turns of the world, and anyone who is captivated by the story will take time to savour every last morsel on offer here.

In comparison, The Fall is a lot more restrictive than Human Revolution which is clearly a result of the limitations of the technology but it’s only to be expected. The missions and open sections are more linear, offering fewer options and less freedom, but enough to make it feel like you’re not being forced into taking a route you would rather not. All the augmentation choices are still available to you though, so you can beef up Saxon how you wish, which will obviously aid you down the track in later missions. The game only lasts four hours though, which takes out some of the joy of working on Saxon and making him more formidable over time. Of course you still need the modifications to complete more challenging sections of the game, but it does mean that the earlier sections are somewhat easy and don’t require multiple, if any, augmentations at all.

Despite being a watered down version of Human Revolution for all intents and purposes, The Fall is a perfectly suited mobile addition to the Deus Ex brand. Whilst it’s not as rewarding or expansive as the earlier titles, it’s one that you can pick up on the way to work and come back to when you have spare time. The augmentation and intrigue are still there as is the fantastic art style which is suited to the crisp mobile display. Let’s be honest though, who doesn’t like a bit of Deus Ex in their lives?