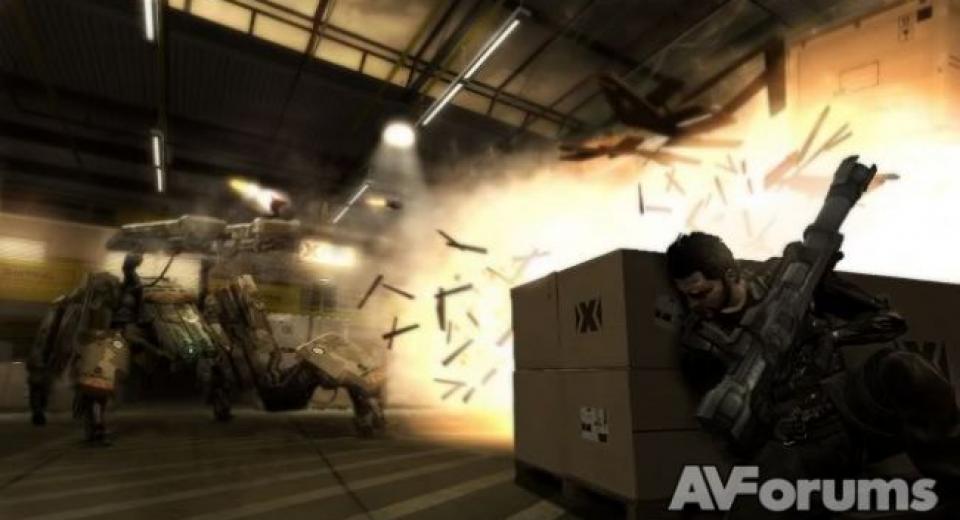 There’s a demonstration outside a LIMB clinic - the place where people can go to get bio-mechanic augmentations. Some of the more extreme protesters are no doubt associated with the ‘Purity First’ movement, who believe the clinic’s work is immoral and unnatural. Playing as Adam Jensen, I mill around questioning people until they’ve nothing new to say. In the course of this, someone comments, “It’s our limitations that make us human.” There’s a subtext to this remark: he’s suggesting that the heavily-augmented Jensen himself is something other than human. In a manner recalling the social tensions of the X-men universe, those with superhuman abilities are seen as somehow subhuman by a number of the envious or mistrusting masses.

It’s the constant trickle of lines like those that added so much depth to the original Deus Ex, and do the same for Human Revolution (for the purposes of this review, 2004’s awkward Invisible War never happened). Everything you see, hear and do in this game contributes to a carefully crafted process of world-building and storytelling. While stealthing around guarded areas, you’ll hear enemies discussing political ideologies. Outside, in the (almost) perpetual nighttime, you’ll overhear homeless people bemoaning the societal problems that arise in a world where corporations have more power than governments. And so it goes on.

Human Revolution is a prequel to the groundbreaking Deus Ex. Adam Jensen is security chief for Sarif Industries, whose researchers have made a major breakthrough in the nascent field of human augmentations. On the eve of the discovery being made public, the office is attacked by mercenaries and….well, the following few minutes of plot is basically the Robocop origin story under a different name. Jensen is brutally taken down, only to be revived, repaired and rebuilt as the ultimate cyborg.

Six months later Jensen is back on his feet, augmented from head to toe. At first, only a small number of these enhancements are activated. The rest have to be enabled via Praxis points (“Praxis” can be defined as the realisation or practice of a skill). These points are either earned through accumulating XP, bought, or on rare occasions, found. Gameplay is predominately from a first person perspective but it switches to the third person when Jensen's in cover or climbing ladders. Occasionally the movement between the two can be momentarily disorienting, but the cover mechanic wouldn't have worked so well in the first person and on balance it's the right design choice. The weapons feel sturdy to hold and fire and the one-button takedowns are visually impressive - think Neo in the Matrix. That said, the transition into the takedown animation is a flow-interrupting cut-to-black, which is both aesthetically and functionally irritating.

The much-touted 'four modes of play' is a legitimate claim. Obstacles can be tackled by stealth, all-guns-blazing combat, hacking and exploration - or any combination of those. In practice there are two ways that most players will approach this game: quick and lethal or slow and non-lethal. To get the most out of playing, the latter is the right choice. Stealth and careful attention to the environment is the best way to enjoy Human Revolution. Be patient, read everything, talk to everyone, sneak around.

Jensen's various augmentations lend themselves to the different styles of gameplay. For example, players favouring combat will want to activate the Rhino Dermal Armor, which enables Jensen to take more hits. Those preferring stealth might opt for temporary invisibility or the ability to see enemies through walls.

Regardless of your approach to the game, there will be a handful of times where direct combat is more or less unavoidable. The inclusion of four boss battles is a controversial choice, because it seems to unduly punish the player who has chosen to avoid physical confrontation (read: the player taking the most gratifying approach). Go in under-equipped at your peril.

The four possible approaches are not particularly well-balanced. Hacking offers the greatest rewards, not only in terms of the goodies and XP you can accumulate from an individual terminal, but also because of the sheer volume of hacking opportunities around. It’s all done through a minigame that will no doubt divide opinion, but love or hate it, upgrading the relevant augmentations early on is definitely in your best interests. And it’s important to focus your upgrades on the augmentations that will complement your chosen method of play, because you don’t want to end up spreading your enhancements too thin to be of use. This matters because Human Revolution is not an easy game. It is a grown-up game, and not just in the violence and sex ‘mature’ sense. If you want to fully experience the world, you’ll need to do a lot of reading of newspapers, ebooks and the like. Furthermore, some sections are extremely challenging, especially if you opt for a stealthy approach (which, in case this review hasn’t been clear so far, you should). Expect to be making a lot of manual saves as insurance against repeated deaths but be warned: loading times can be quite lengthy; I clocked some at upwards of 25 seconds. You’ll be suffering that every two minutes when you fail time and again during a boss battle.

Human Revoluion is shorter than the original but a thorough playthrough will certainly take upwards of 20 hours - nearer 30 if you play it slow - and the chances you’ll see everything your first time are slim so there’s a lot of replay value.

Naturally, developing a sizable game with such a broad scope increases the risk of gameplay niggles. There will be many with legitimate complaints about the inclusion of boss battles, and others who tire quickly of the hacking minigame. Disappointingly, the graphics don’t quite deliver on the atmosphere’s promise: character animations are often awkward (I don’t think anyone would have missed Jensen’s odd arm-crossing stance if it had been omitted), and some of the voice acting is sub-par.

But these criticisms shouldn’t be overblown; Human Revolution is a rare gem. Many would no doubt say that the flexible gameplay is the main draw, but that distracts attention from what’s really special about this game: the world Eidos Montreal have created. It’s a world that’s very much in keeping with the original game, a world of conspiracy and corruption - but most importantly, it’s a world built on a fantastic ‘what-if’ scenario, explored thoroughly and intelligently. Go get it.

The third game in the Deus Ex series is a prequel to the groundbreaking original, in a time when augmentations are just beginning to reshape mankind. Featuring a flexible approach to gameplay, a conspiracy-ridden plot and an intelligent examination of the impacts of transhumanism, Human Revolution is nothing if not ambitious. A couple of odd design choices will alienate some players, but most fans should rejoice, for here is a game that’s worthy of the name Deus Ex.