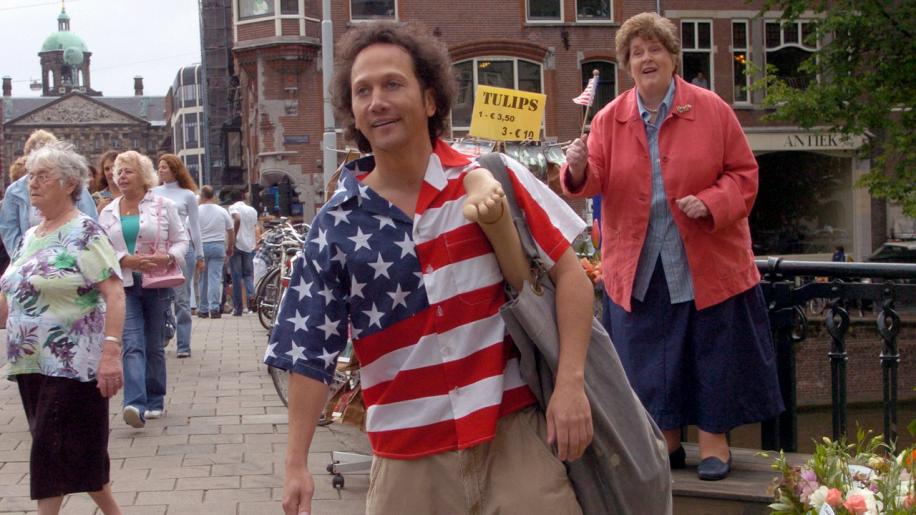 Deuce Bigalow: European Gigolo picks up where the first movie left off with Deuce (Rob Schneider) travelling to Amsterdam to visit his friend and 'He-Pimp' TJ Hicks (Eddie Griffin) who has moved to Europe to expand his business interests. But there is also a problem in the Dutch capital as someone is killing all the top male prostitutes and TJ asks Deuce to help track down the killer by resuming his role as a 'prostidude' and acting as bait. Deuce and TJ also have problems with the local police chief, Gaspar Voorsboch (Jeroen Krabbé) who believes TJ is the murderer. Deuce does find romance in the arms of the police chief's niece Eva (Hanna Verboom) and of course he goes out on dates with some unfortunate women in the hope of finding the killer. That's the story, I would say in a nutshell but that really is the full story! A few British 'actors' are present here too including Johnny Vaughn, Kelly Brook and if you blink you'll miss her, Rachel Stevens. But that's just trivia, how was the movie itself?

Now I'll be the first to admit a certain fondness for the first Deuce Bigalow movie with its gutter humour and digs at the more challenged amongst us. The sketch with the girl suffering from Tourette's (the uncontrollable urge to swear and curse) had me laughing until I couldn't breathe. But the reason the first movie worked, was that although the brunt of these gags were real, and not usually funny conditions (Tourette's, narcolepsy, flatulence, very tall women and prosthetic limbs) they were not conditions that the viewer would automatically take offence to having them made fun of.

Not so with Deuce Bigalow: European Gigolo. Here the blind, a woman with a hole in her throat and a hunched back woman are all ridiculed and to be honest, it isn't very funny. It is kind of like a bad taste Benny Hill show and you know when a comedy is in bad taste when it isn't funny and makes you slightly uncomfortable to even consider laughing at it. There are some amusing pieces most of which are helmed by Eddie Griffin's character 'He-Pimp' TJ and his hilarious vocabulary of male prostitute terminology ('prostidude' for one!) but he is not the lead and Rob Schneider gives a performance that stinks of cashing in on the success of the first film and not really giving the commitment the role needs.

In fact, the whole movie has an air of 'cashing in' about it. Most of the gags where used to much better effect in the original movie and the story is weak to say the least, not to mention the ridiculous sentiment it tries to convey about how women want more than just sex from a relationship (I am not saying the sentiment is ridiculous, but the change in tempo from a bad taste movie to one that suddenly has a conscience, is).

Deuce Bigalow: European Gigolo fails on nearly every level; it is not very funny for the most part, it has some uncomfortably bad taste jokes, it covers ground already visited with much more success in the original and is also excruciatingly corny in places. If not for Eddie Griffin, I would have given this movie a 1 out of 10, but at least he made me smile a few times!