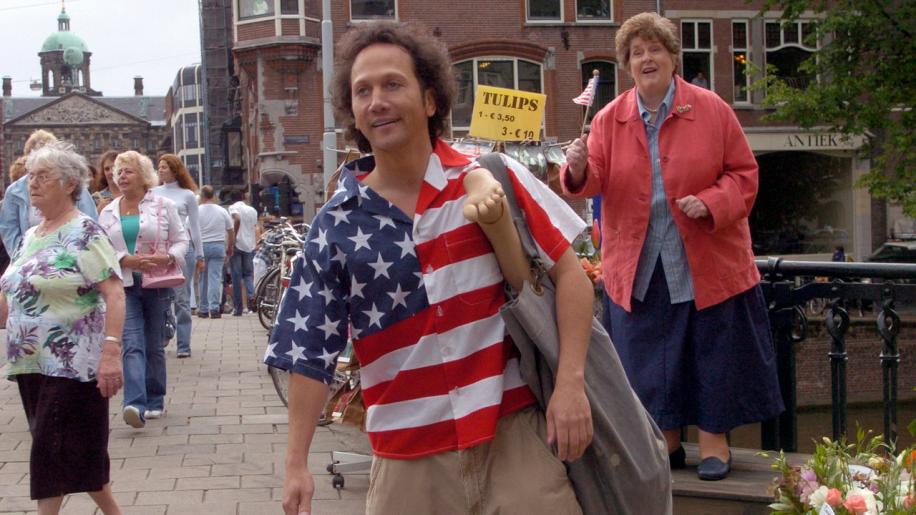 Not a bad picture at all I must say. The box raves about the movie being 'Mastered in High Definition' which seems to be fashionable of late (I think they are prepping us for High Def DVD and Blu-ray) but it certainly does look sharp especially considering the relatively low bitrate of just 4.47Mbps. Grain is very low and the image has a very nice 'clean' look to it although I did notice some edge enhancement present which gave the image a slightly digitized look

Colour rendition was also impressive with skin tones especially appearing very natural. Amsterdam's tulips stood prominently from the pastel greens of the grass and subtle blues of the summer sky. Black levels were acceptable rather than exceptional with darker scenes lacking the 'bite' of some more impressive releases. Shadow detail also lacked information especially during the night scenes but considering the movie itself, the image was more than adequate and occasionally very good indeed. The Dolby Digital 5.1 mix will not challenge your system to any extent and with a movie leant very much towards dialogue, the surrounds get little use either. The vocals lacked a certain warmth that better soundtracks posses and sounded a little thin but at least they were prominent enough to always be clear and coherent. Dynamics too had little impact and bass depth within the movie was lacklustre and unimpressive.

What did impress though was the musical soundtrack with both the featured contemporary tunes and the main score sounding very spacious and channelled throughout all the speakers even challenging the bass reproduction more than the onscreen action could manage. So again we have a case of ok, but not great but is fine for the subject matter and anymore than this is not really warranted. A wide array of extras are included on this single disc edition and pretty good they are too. Firstly we have the two-part Making-Of Featurette which is one of the better and more in depth 'Making-Of' features that I have seen. It takes you from the cast and crew arriving at the airport in Amsterdam to setting up scenes and casting actors, models and extras. It shows the logistical problems encountered with filming the 'midget out of the window' scene and how to film in a busy city such as Amsterdam without attracting too much public attention. We see candid interviews with all the main cast on set and how the Rob Schneider managed to get some of the actors involved to come onboard. Entertaining and interesting, more than I can say for the movie!

Next is 'The Casting Lounge' which takes us to Stringfellow's in London where Rob Schneider, Johnny Vaughn, Peter Stringfellow and production crew sit on bar stools and audition girls rubbing their wet breasts up against a pane of glass ( I kid you not!) These girls include Michelle Marsh which I'm sure any red blooded FHM reader will know. This was to select a girl for the 'window cleaning' scene in the movie which eventually went to Katie Downes a Page 3 model.

After this we have 'TJ's Float Crib' Featurette which has TJ ( Eddie Griffin) showing us around his boat featured in the movie and talking complete rubbish along the way! This feature is a little 'throw away' in its appeal and is best passed over.

Slightly more entertaining are the 'So You Want to be a Man-Whore' Infomercials which has characters from the movie advertising their services in a commercial style. There are four 'infomercials' which can be selected individually or all played consecutively. We have 'Cock Cleanser 3000', 1-800-Hump-Me (best avoided), 'Hot Moves' and 'Herpes PSA'

'Comedy Central's Reel' Comedy Special is a 30 minute look at the movie featuring movie clips, interviews with the cast and has been taken off of American TV's Comedy Central show. Not quite as in depth as the Making -Of featurette, but just as entertaining.

The 'A Burger and a Bentley' Featurette follows and looks at the making of a commercial to advertise the movie. It features Deuce dressed in skimpy shorts and a boob tube washing a Bentley car owned by TJ as he hoses himself down whilst eating a burger ( no, I couldn't work it out either!) At the end of this, we get to see the finished article which does shed a little light on what they were aiming for.

Then we have the 'Man-Ho 101' Featurette. This examines the secret lingo used by the 'Man-Ho' characters in the movie. Terms such as 'The Turkish Snowcone, 'The Portuguese Breakfast' and 'The Mongolian Sticky Bun' are all explored, but not really explained but they are fun all the same. The idea is to pair a nationality with a food apparently so I'm sure you can make up your own 'he-bitch' moves!

After this we have 2 deleted scenes which consist of 'Deuce window dance' where TJ lures him into a room where he strips and begins dancing ignorant that TJ had opened some curtains exposing him to the public's gaze outside. The second is 'The Mmm Mmm Club' where we see Deuce trying to get some answers from an elderly drag queen about the possible murder suspects and whether this character could be one of them.

We finish off with some trailers to other releases or forthcoming movies including: The Fog, Rent, Stealth, The Da Vinci Code, Fun with Dick and Jane, Into The Blue, The Pink Panther (Steve Martin), Christmas With The Kranks, Seinfeld: Seasons 5 & 6, Open Season, The Cave, Memoirs of a Geisha and finally Ringers: Lord of the Fans. Plenty to keep you going long after the credits have rolled. A dire sequel to a reasonably amusing original means that Deuce Bigalow: European Gigolo is a movie best avoided. Watch the first one and if you enjoy it, let that be enough because this sequel will leave a bitter taste in your mouth and detracts from all the positives the original had. The disc itself has some reasonable extras but a special edition of trash is still trash at the end of the day. Rob Schneider may have to really become a 'Man-Whore' to support himself after this sorry affair.