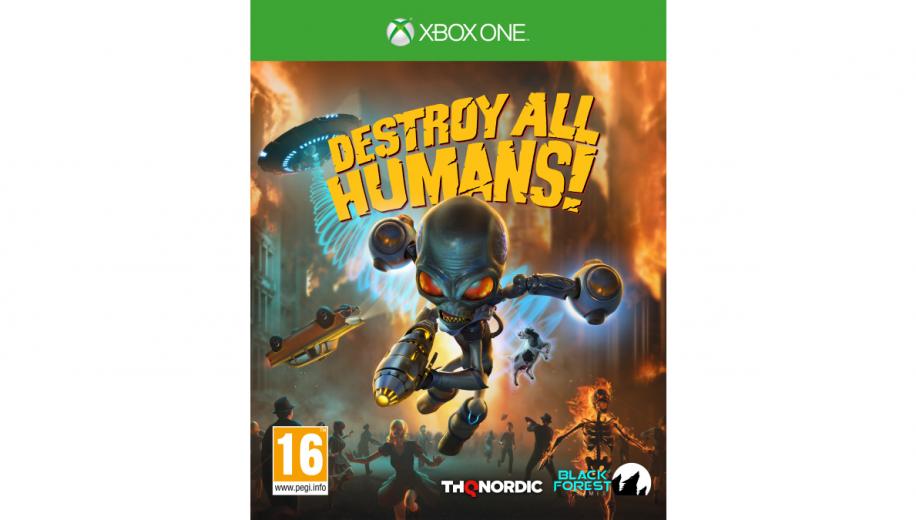 Ready to feel old? The original Destroy All Humans was released in 2005 – and on the original Xbox console (the Xbox One launched later in the year). It came out on the same summers day as Battlefield 2 and in a year that also gave us the very first Guitar Hero and a much-publicised ‘battle’ between GTA: San Andreas and Driv3r. You probably know how that ended up. 15 very long years ago Destroy All Humans put a fun spin on the usual third-person action-adventure titles by putting you in the spaceship of an alien invader, ready to happily lay waste to the stupid humans below. With a late 1950's setting and a backdrop lifted from those classic/awful B-movies of the era, it seemed like a winner even before it hit the shelves. Sadly, the actual gameplay didn’t quite live up to the premise but it was still a whole heap of fun to play, and one that has lingered long in the minds of many gamers.

A whole heap of fun to play and one that has lingered long in the minds of many gamers...

Its legacy can be seen in one very good sequel and two very regrettable spin-offs. More recently we saw a remastered version for the PS4 in 2016, which was mostly just some up-rendered 1080p visuals that looked decent enough but were hardly in keeping with the modern era. This latest update is more of a remodelling than a remake or remaster, but it does come with a number of gameplay upgrades that help to paper over some of the cracks in the original – but that doesn’t mean this all-new Destroy All Humans is entirely buffed and polished in line with 2020 standards.

We call this a remodelling because, unlike the 2016 upgrade, this has been rebuilt from the ground up. The original assets were used more as a template, with everything being redesigned and remodelled using Epic’s Unreal 4 engine, giving the game a far more stable platform to build upon. While still very familiar in its appearance, there is a slightly more cartoonish tone to the visuals, which does fit in nicely with the game as a whole.

The devs have often referred to this as being more of a “remake of the memories” from playing the original, which might seem strange given that it’s pretty much a scene-for-scene remake – just a much better looking one. However, somewhat disappointingly they haven’t exactly pushed the boat out in terms of the visuals, with the game running at 1080p on consoles. You can get a framerate up to 60fps on the Xbox One X but even that will often drop to 30fps (in line with the likes of the Xbox One S and PS4 Pro), with no further upgrades for the Pro or Enhanced versions. PC gamers might get a slightly better shake with the right kit but it’s nothing worth shouting about. It's not really a big issue when you’re actually playing the game, especially if you remember playing the original all those years ago, or perhaps picked it up a few months back when it popped up for free on the Xbox Games With Gold. As you’d most certainly expect, it does look a lot better and plays that much smoother than it did back in 2005, with more textures and greater detail given to the characters and surroundings. It largely serves to liven up the backdrops while also adding more personality to the array of NPCs you’ll otherwise be zapping, disintegrating or making their heads explode with anal probes.

Not all of the dialogue or jokes have aged well, or might not relate as much to a new generation...

One aspect that does remain largely intact is the audio. Rather than re-recording the core dialogue, the devs have stuck with the original voice acting for the lead roles, albeit enhanced as best as they can within the limitations of those 15-year-old files. To be fair, the dialogue was pretty much nailed on back then, with the banter between the gun-hungry lead alien Crypto 137 and Pox, the brains behind the operation, adding as much to the fun as the wanton destruction. And technically it holds up pretty well, though obviously lacking the clarity or finesse that a 2020 set-up would allow.

There has been some new audio added to bolster the in-game effects and increase the NPC responses, for example – scanning their thoughts throws up even more random silliness – but not all of the dialogue or jokes have aged well, or might not relate as much to a new generation of gamer. Although it does ring home nicely if you do have fond memories of the many deadpan gags in the original (“I’m not green!”). As mentioned, while the set-up for Destroy All Humans was (ahem) out of this world, the gameplay in the original was less than inter-stellar and this version has certainly been improved to address some of those issues. Your arsenal remains much the same, with your electrical zap-o-matic ray gun soon joined by options including a disintegrator ray, ion detonator and a few other fun ways to obliterate the locals. Likewise, you can jump in out of your spaceship at will (with some restrictions when you’re on-mission), using a laser to rip through buildings – now with a vertical option so you can get your ‘Independence Day’ vibe on – and a few other handy tools for levelling a town.

You also have a range of psychic abilities, ranging from throwing objects and enemies around with psychokinesis to taking on a human disguise or implanting prompts into the heads of NPCs, perhaps to get them to act as an ally or as a distraction if you're looking for a stealthier approach. You can indulge in a shootout while also levitating a cow above your head – because why not?

Crucially in this updated version, you can use both your weapons and powers at the same time so you can indulge in a shootout while also levitating a cow above your head – because why not? Indeed, those psychokinesis skills are helped further with a new lock-on mechanism on the left trigger so you can make far better use of surrounding debris or conveniently-placed explosives in the midst of a battle. It also helps with the vastly improved mid-air combat when using your jetpack.

It can be needed as well, as there are far more enemies on your tail than in the original. Perhaps due to tech limitations of the time, you were rarely under any real pressure if you wanted to run and gun through a town back in 2005. Now, though, cops, soldiers and shotgun-toting farmers are plentiful and you might find yourself needing to run away or hideout on a rooftop a few more times than you might expect. Other changes include one new mission (dropped from the original game) and a revision of the optional challenge missions. Now there are just four of them in each of the six key locations but with a three-star rating system that will take some patience (and a few in-game upgrades) to max out. Speaking of upgrades, there are lots more of them here and they do help to just build up that small RPG element, as your character gets that little bit better a little more often and with a few new tricks to make the most of.

One of them is a new dash move for a burst of speed to dodge projectiles or help you escape a baying mob. Once fully upgraded to its SKATE status, it’s a lot of fun to be effectively speeding around on an invisible hoverboard! There are now also optional mission goals to consider for extra rewards and finally a decent checkpoint system, so thankfully you won’t have to replay entire missions from the start if you make one small mistake.

While Some Things Change…

Although the gameplay has certainly improved, it’s really only in keeping with what you’d expect from such a game in recent years. So, while we had a lot of fun messing around with those pesky humans, it was never really going to live up to shooters such as Doom Eternal or the open world aspects of, say, a Zelda title.

That’s not really a criticism as we’re talking about a 15-year-old game template being used, but it does work against Destroy All Humans in places. We’ve mentioned the dialogue but the core missions are based around a sequence of fairly short in-game bursts. This may have been due to technical restraints in 2005 but it does mean that outside of the free-roam exploration you’re constantly being pulled out of the game for a cutscene or to return to your mothership. This is fine if you’re happy to play in bitesize chunks or are keen to boost your arsenal with a new upgrade, but it frequently kills the immersion. You can’t even hang around to wreak havoc after a mission ends as you could in the original – instead it’s back to the ship and a few more slow loading screens until you’re back in the action. Similarly the locations, while given a very nice coat of paint, are still based on those 2005 designs which, by 2020 standards, can leave them feeling a little limited and lifeless.

It may just provide the spark for the return of a franchise that still has a lot of potential to live up to...

Although it’s great to be able to relive the original game, this new-and-improved version of Destroy All Humans is still somewhat hampered by sticking so rigidly to now dated templates. So, while older gamers might relish the chance to relive some happy memories, those new to the franchise might not be quite so impressed. Destroy All Humans was great fun back in 2005 and that still holds true today. The visual makeover does a decent enough job in freshening things up, while the gameplay changes definitely help to address some of the flaws of the original. However, with some limitations seen as a result of using that original game as a template, it doesn’t quite feel like a game you can favourably compare against the modern marketplace.

If you have good memories of the original, this is a great way to relive days gone by, and in a far more polished, varied and accessible way. Even newcomers should find a lot to enjoy with the freedom to level a town or wipe out a bunch of ageing stereotypes in a gleefully irreverent manner. It may not seem like a game released on the brink of a yet another new console generation but it’s still worth a look. And who knows? With any luck it may just provide the spark for the return of a franchise that still has a lot of potential to live up to.