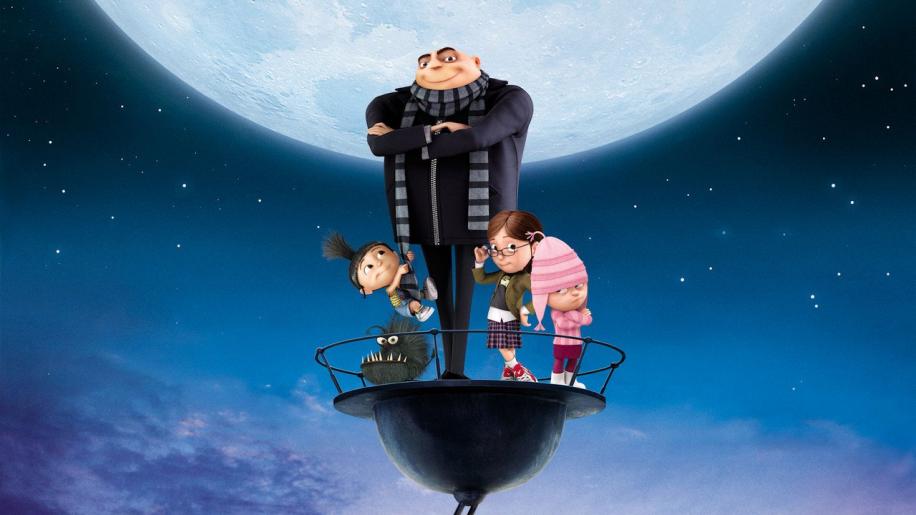 ‘Despicable Me’ was released in 2010 and was directed by Pierre Coffin and Chris Renaud. This marks the first feature debut for the pair, with both previously taking part in animation, producing and other duties (on other projects) before deciding to test their skills by taking the helm on a fully fledged production. The movie was released by Illumination Entertainment, a small network based studio, who operate by leasing work on their projects to a global network of talent. A seemingly cost effective way to get things done; but, with DreamWorks and Pixar releasing two of their most successful movies to date last year (‘How to Train Your Dragon’ and ‘Toy Story 3’, respectively), this relatively unknown and largely independent team have their work cut out for them.

The team at Illumination Entertainment have brought together a fine cast of voice talent to the table. In the lead role, playing super villain Gru, is the man we love to hate from the ‘American Office’, Steve Carell. Jason Segal (‘Knocked Up’) plays Gru’s arch nemesis, Vector. Gru’s wacky scientist assistant, Dr. Nefario, is played by brash, loud mouthed wannabe rock superstar, Russell Brand (‘Get Him to the Greek’). Will Arnett (‘Arrested Development’) and Julie “The Hills are Alive” Andrews also play supporting roles as Bank of Evil manager, Mr. Perkins, and Gru’s mother, respectively. Also cropping up is everyone’s favourite Conchord, Jermaine Clement, and Danny “Kenny Powers” McBride. Although there are no real current A-list actors in the mix, there’s enough experience and improvisational talent on the roster to provide some good characterisation to the on screen animation.

When some unknown super villain steals one of the Great Pyramids of Giza (and replaces it with a giant inflatable pseudo-pyramid to fool the world), the rest of the world’s villains assemble to avoid looking, well.......lame. Gru is the top of the heap in the world of super villains. His list of accomplishments are dastardly and devious, striking fear and wonder into the heart of Joe Public and the general consensus is that Gru is the best villain of all time. But, with breaking news of new kid on the block, who has pulled off the aforementioned amazing Egyptian heist, it’s clear that there’s a new challenger to Gru’s throne. Not to be outdone by a mere juvenile upstart, Gru unveils his most ambitious evil plan to date; he is going to steal the moon!! Gru assembles his minions, who are basically little yellow munchkin-type sidekicks, who are pretty clumsy (and funny). Arranging a meeting with the Bank of Evil’s manager (where all good criminals are welcome for personal and business loans) Gru outlines his plan to bring the world to its collective knees, in awe of his superior villainy. Although undoubtedly impressed at Gru’s tenacity, the manager cannot endorse the loan as Gru is missing a key component of his plan....a shrink ray. With this classic weapon of super villain lore, Gru will be able to minimise the moon (to a more manageable size) so that he can steal it.

But at the bank he runs into Vector, who just happens to be the mastermind behind the procurement of the pyramids. Wise to Gru’s much publicised plans to nick Earth’s only satellite, Vector beats Gru to the punch and obtains the shrink ray for himself. Scheming for a way to gain entry to Vector’s impossibly secure fortress (complete with patrolling sharks), Gru hatches a twisted plan for his own gain; he adopts three orphan girls and plans to use them to infiltrate Vector’s abode, under the guise of girl-guides selling cookies. But of course things don’t do quite to plan and the three cute little girls end up worming their way into Gru’s life and melting his icy heart. How can he possibly find a way to redeem his premier super baddie status and beat Vector into achieving his lunar goal?

I have to say that although I enjoyed ‘Despicable Me’ at face value, I came away pretty much unaffected. It’s not a movie that inspires anything or indeed provokes any thoughts or points for discussion after viewing. That being said, there’s nothing particularly wrong with it either. The characters are mildly interesting and entertaining, with strong voice support from the collective cast. All are pretty much unrecognisable, with Carell in particular sounding pretty different that his normal self, sporting a think Eastern European accent. Although he does slip into Arnie territory at times, and Michael Scott’s familiar intonations appear on occasion, he does an admirable job overall. Segal fares well with the high pitched adolescent whine of Vector and Andrews’s also puts on a great show as Gru’s evil mother. A real surprise for me was Russell Brand, a man that I normally despise but here he does a terrific job, largely because he’s completely unrecognisable under the guise of Dr. Nefario!

The plot is pretty shallow, with a straight forward back and forward battle of evil minds, with the arrival of the orphans throwing a complete spanner in the works. The short run time prevents boredom from setting in and there’s enough mildly amusing humour and slapstick gags (from Gru’s minion helpers) to keep the audiences’ collective attention (although it can wander into the realm of stupidity at times). The inclusion of sickeningly sweet scenes of Gru and the orphans “making house” feel completely contrived and over the top; I’m sure that some will find them adorable but I found them a little out of place. Imagination, which always plays a major part in bringing animated features to life, is most certainly present here but is limited to the technical merits of creating a beautiful animated feature that sadly is a little soul-less. The action sequences are exciting but for a movie with such a relatively short run time and linear plot, there are simply not enough of them. The characters have enough depth to make them somewhat interesting but this only goes so far and there were times during the movie where my brain simply shut off and I was zombified by the on screen proceedings; it’s beautiful to behold but there’s not much going on upstairs. It’s largely a buddy movie with the tried and tested odd couple paring, who somehow manage to get along and pull through. It’s without doubt a good message for the kids, with strong themes of family values etc. For the adults there’s plenty of quirky humour (especially from the minions and the boogie robots!) but there’s also some portions of “happy song, comedy montage” and “warm cuddly cringe moments”, which can get mildly irritating. And the ending is pure shiver inducing cheese – the kids will alp it up though.

I suppose that I’m being a little too harsh on this first time effort from Illumination Entertainment but in the world of animation some very high standards have been set by the likes of Pixar’s ‘Up’ and to top that action adventure animation standout, you have to create something very special and sadly ‘Despicable Me’ falls well short of the mark. At the time of this movie’s release it was in direct competition with similar ho-hum animated feature ‘Megamind’, from rival studio DreamWorks (who seem to be churning out movies at the moment, at the expense of quality so it seems). With plotlines and characters that are bizarrely alike (they even had the same composer!), the race was on to see which movie would prevail. Boasting a bigger and better cast, and star Will Ferrell winning the Guinness World Record for the largest superhero costume function in promotion of his movie, it’s no surprise that ‘Megamind’ was released to a larger critical acclaim and commercial success, beating ‘Despicable Me’ to the punch . So although Illumination and its crew of close knit in house specialists have yet to really make their mark, they could have done a lot worse. This is the first outing for many of the crew and also for the directors and while there’s nothing technically wrong with the movie, there’s nothing that’s going to blow you away either – this one falls into the same category as ‘Bolt’ – good fun for the kids but I’d let them watch this one on their own!

Check out the 3D review of this release, which is available from our database.