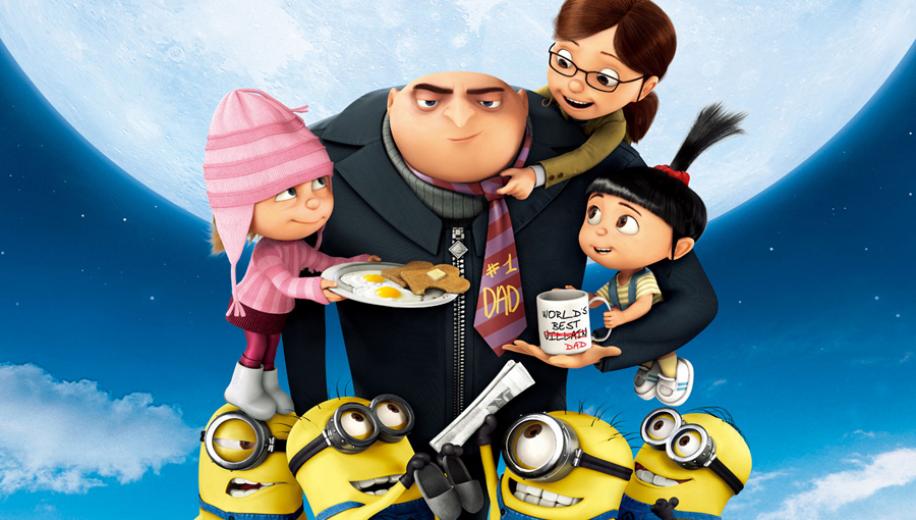 Despicable Me was the hit debut animation from Illumination Entertainment, an excellent anti-villain comedy driven by Steve Carell's hilarious Gru.

Cleverly released almost half a year ahead of the similarly themed 2010 animation, Megamind (an enjoyable Will Ferrell feature, but one which basically missed the boat), Despicable Me managed to kick-start both Chris Meledandri's Universal Studios-partnered Illumination Entertainment, and a very popular franchise that's seen a sequel, a prequel/spin-off and, shortly, a second sequel, and then a second prequel/spin-off, taking in billions at the Box Office with plenty more to follow. Thankfully it's largely proven worthy of the success, winning the hearts and minds of its followers, both young and old.
Although this was most obviously due to the popularity of the fun, lemmings-like Minions, it's actually really thanks to the excellent would-be supervillain lead voiced to perfection by an almost unrecognisable Steve Carell. This, combined with a series of original plot twists and natural comic beats, and - of course - those lovable Minions, is what makes it work so well. The first chapter's clash of old vs. new supervillain, whilst the former finds his life shaken up by three persistent young orphan girls, is an excellent, heartwarming debut, proving a worthy competitor to Pixar and, thus far, the best of the series. Despicable Me and it's sequel were always reference discs on Blu-ray, and so it's unsurprising that, just in time for the release of the third movie at the end of the month, we're getting to see what they look like on Ultra HD Blu-ray. It may well be limited by a 2K Digital Intermediate (DI), resulting in a 4K upscale, but this Ultra HD Blu-ray disc boasts a 2160p presentation, framed in the movie's original theatrical aspect ratio of 1.85:1 widescreen. The disc uses 10-bit video depth, a Wider Colour Gamut (WCG) and High Dynamic Range (HDR), and is encoded using the HEVC (H.265) codec.

We reviewed the UK Ultra HD Blu-ray release of Despicable Me on a Samsung UE55KS8000 Ultra HD TV and a Samsung UBD-K8500 Ultra HD Blu-ray player, which we used to evaluate the disc's HDR10 base layer. This is the first UHD Blu-ray to include Dolby Vision, which means those with a suitably equipped player and TV can enjoy HDR with addition of dynamic metadata. We will be evaluating this aspect of the release using an updated Oppo UDP-203 and an LG OLED55B7V very soon and will update this review accordingly.


It's hard to see how the original BD could be improved upon, but this debut Dolby Vision release manages it

Words like 'flawless' and 'perfect' frequently come to mind when watching Despicable Me (and, for that matter, its sequel), with striking detail providing fantastic nuances and textures on the objects and characters, superior shading and shadow representation, and absolutely fabulous colours. It's a truly gorgeous looking film, popping with vibrancy and life. Indeed it's got so much depth and sheer pop in Ultra HD, that you barely notice that you're not actually watching it in its preferred 3D guise. Sure, it's not native 4K and it is hard to see how the original Blu-ray could even be improved upon, but, somehow, this new UHD Blu-ray release manages it, offering up a demo and reference presentation through and through. Despicable Me comes complete with an immersive DTS: X audio track centered on a fabulous DTS-HD Master Audio 7.1 core, which does a tremendous job itself, remaining largely demo and reference quality even at this basic level, even before you consider the added benefits of DTS: X. Dialogue is prioritised across the frontal array, delivered with clarity and precision. Effects are myriad, and really quite inventive - with freeze rays, shrink rays and massive thrumming metallic Mad Max-esque vehicles just a few of the mad inventions that allow for really a very diverse track full of exciting events. Dissemination is accurate, with a clinically designed soundscape that provides superb surround usage, and a boisterous, engulfing experience, complete with some strong LFE input to boot. Add to all this the Pharrell Williams score and song tracks, which further provide some strong LFE input and keep the surrounds from never letting go, and you have a fantastic audio mix. And that's even before you look at the enhanced DTS: X aspect.


In the same way as the image has been improved, so the disc now boasts a DTS:X soundtrack Universal's Ultra HD Blu-ray release of Despicable Me mirrors the 3D disc from the original release, i.e. the only extras ported over onto it are the mini-movies, with the rest of the supplemental material on the accompanying Blu-ray.


There's nothing new here, but it'll still do

Of course the most rewatched extras are the mini-movies, so it's isn't quite the end of the world, with all of the previous extras ported over from the earlier release (well, it's just the exact same disc in this package here), including the Commentary from the directors (and minions) and a slew of Featurettes looking behind everything from the production to the music to the voice cast to the gadgets. There's nothing new here, but it'll still do. Thus far, the best of the series

On the eve of the release of the third movie in the series (notwithstanding the spin-off, Minions), Despicable Me gets a re-release on a gorgeous Ultra HD Blu-ray disc that not only includes a new DTS:X mix but is also the first to support Dolby Vision. Already a reference title, the film somehow - almost unbelievably - manages look even before on Ultra HD Blu-ray, and fans will want to check out this new release.