This fun sequel packs in the adult references amidst the child-friendly humour. 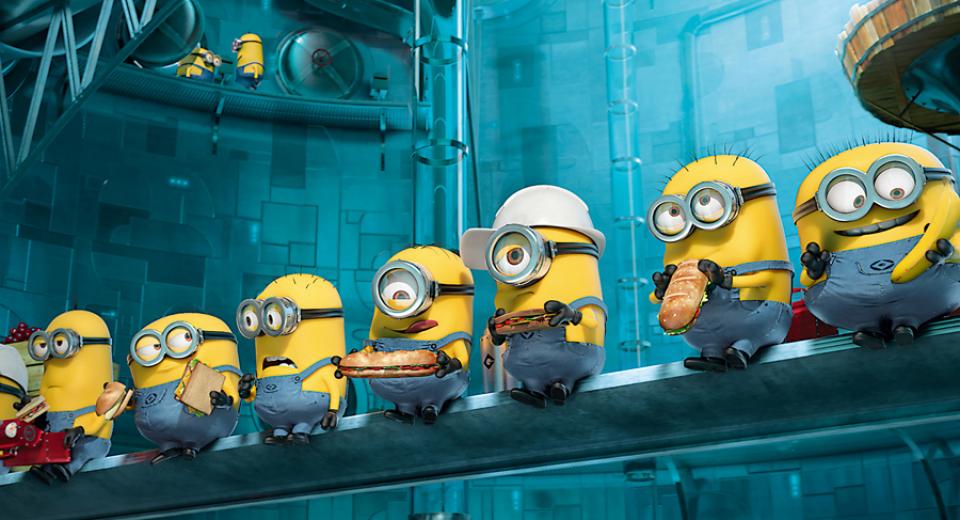 Wow it's nice to see a movie do precisely what you expect from it. Disappointed with the slew of tentpole features and blockbuster sequels that have dominated the multiplexes recently? Despicable Me 2 hits home with a superb follow-up to the hilarious original film, rollicking along at a breakneck pace, packing in the adult references amidst the child-friendly humour, and further cementing the seemingly unstoppable popularity of those lovable Minions; paving the way for 2014's spin-off film dedicated to their origins.

Do you know the best thing about Brad Pitt's World War Z? The fact that it took so long to finally hit our screens that the writers of Despicable Me 2 had enough time to incorporate several hilarious direct references to the best bits. Why watch a bloodless zombie horror with no bite when you can instead watch hundreds of Minions flood the screen like an unstoppable plague? Oh yeah, that reminds me - the trailer to Despicable Me 2 - hats off to the makers who finally realised that it would be a good idea not to give away everything in advance. Hell, even the 3D is great on this movie, just about the best I've seen since... Despicable Me.

The story picks up at the end of the first movie: Gru, once a notorious supervillain, has now renounced his evil ways, gone straight, and adopted three young orphans in the process. Life isn’t easy with the girls, however – the eldest one is old enough to be interested in boys, and the youngest is struggling to come to terms with the void that having no mother has left her with. Oh, and all three want Gru to get a girlfriend.

Enter: Lucy Wilde, agent for the Anti-Villain League – which requires Gru’s expertise to help catch a new supervillain; a dastardly fiend who has cracked a formula for a deadly virus which can turn even the most seemingly harmless creatures (they test it on a bunny) into crazed, near-indestructible berserkers - who look like purple Billy Connollys - that eat anything and everything in their path. Will they be able to find and stop him?

I have no idea why we always get two competing movies with the same – often unusual – selling point, released within months of one another. Decades pass without these ideas being translated into movies, and then, all of a sudden we get two: Wyatt Earp / Tombstone; Armageddon / Deep Impact; Observe and Report / Paul Blart: Mall Cop; The Illusionist / The Prestige; Mission to Mars / Red Planet; Dante’s Peak / Volcano; Mirror Mirror / Snow White and the Huntsman; hell you could even compare Dredd and The Raid. Which is not to say that often both movies aren’t worth your time (or, in some cases, neither), but that there’s clearly more than insane coincidence going on here – pitched stories doing the rounds for long enough that eventually somebody goes “a story about the White House getting attacked and a one-man Army saving the day? That sounds like a good idea, let’s write our own version” and then we get Olympus Has Fallen and White House Down.

In 2010 we got two CGI animated features about supervillains turning good, Despicable Me and Megamind. Whilst they both had their merits, Despicable Me was the clear winner at the Box Office and so we now have a sequel. Now many people think that Despicable Me is a Pixar film – which should only be taken as a compliment – but it’s actually made by a fairly small-scale independent Studio founded by Chris Meledandri, who previously worked for 20th Century Fox on animated hits like the Ice Age films. Meledandri founded Illumination Entertainment, who subsequent debuted with the hit, Despicable Me, and then made Hop and the Dr Seuss sequel. Although Illumination have agreed an exclusive distribution deal through Universal, they are still an independent production company, which is a rarity. Especially considering the quality of the output.

Despicable Me played wonderfully on its premise of a man struggling to stay atop the supervillain pile and, inadvertently, becoming something of a hero in the process; perfectly juggling the child-friendly inclusion of three young orphan girls who are hoping to melt the heart of the anti-hero with lots of adult-friendly references and humour. From the Godfather to the more overt Pink Panther movie references, it was well done, and that’s not to mention the fantastic Minions, whose banana-inspired antics appealed to everybody.

Despicable Me 2, in my opinion, lives up to the standard set by the original feature, developing the interaction between Gru and his girls without having to resort to the standard sequel fall-back (have them split up and then get back together) and succeeding in creating a fairly decent villain, whose nefarious plans seep into the narrative slowly at first, the ultimate payoff being both hilarious and satisfying. Along the way we get plenty of nice horror references, and alien abduction references, with the best moments including both the aforementioned World War Z ‘outbreak’ and a brilliant Alien reference. And, of course, Scarface – but more on that later.

Steve Carell’s thick-accented Gru is still as brilliant as ever, even when making the dangerous step towards romance; a step made all the easier by the return of Despicable Me voice talent Kristen Wiig (Bridesmaids), here playing a different character – the wacky Agent Wilde. Their scenes are amidst the best in the film, with the date-gone-wrong sequence absolutely brilliant, and Gru’s obsession with sabotaging his eldest girls’ burgeoning relationship priceless. Russell Brand’s Dr. Nefario returns, getting a slightly more interesting role but, funnily enough, not as many laughs. Steve Coogan’s funniest moments – as the Anti-Villain League head Silas Ramsbottom – relate to his name, and another returning vocal talent, The Hangover’s Ken Jeong (again playing somebody new) is utterly redundant.

Then there’s the weird loss of Al Pacino. Remember his name attached to the trailers? (I’m wondering whether, following on from Jack Reacher and Drive, people will start asking for their money back when they find out he’s not in it?!) You see, it turns out they got pretty far in their work with Pacino – the character he was supposed to play, larger-than-life restaurateur Eduardo, was clearly written with him in mind, and the dialogue was certainly written with a view to milking Pacino’s Scarface persona, Tony Montana – before he left the project. Indeed last-minute replacement Benjamin Bratt is almost unrecognisable, basically doing a Tony Montana impression for the entirety of the role. I’ve no idea why Al Pacino left (“creative differences” covers a lot of ground), but I’d be surprised if he hadn’t completely the majority of his work before that stage, and it’s a shame we won’t ever get to hear his take on the character.

As sequels go, I think Despicable Me 2 does extremely well, maintaining interest, developing ideas and arcs through from the first movie, and delivering laughs and relevances to audience members across age ranges and generations. It also happens to be one of the most effective 3D movies that I have come across recently. From Star Trek Into Darkness to Iron Man 3, it’s amazing how disappointing these conversions continue to be – and at what ticket price hike? £14 + glasses? Thankfully Despicable Me 2 – 3D is well worth every penny, delivering almost consistent examples of depth (positive parallax) and character solidity throughout the feature, as well as some wonderful pop-out-of-the-screen moments (negative parallax), not just in the credits sequence – well worth staying for – but also through excellent touches in the main feature, like the underwater sequences. This is the kind of feature that is well worth seeing in 3D, and that is honestly a rarity these days.

So, whilst those without young children may not be immediately predisposed towards seeing something like Despicable Me 2 at the cinema, I’d still recommend it – if you enjoyed the original, and fancy some decent 3D entertainment, Despicable Me 2 delivers on every level, and proves to be a fun, involving, fast-moving and thoroughly enjoyable sequel. Recommended.
"Ba-na-na?"

Despicable Me 2 hits home with a surprisingly good follow-up to the superb original film, rollicking along at a breakneck pace, packing in the adult references amidst the child-friendly humour, and further cementing the seemingly unstoppable popularity of those lovable Minions; paving the way for 2014’s spin-off film dedicated to their origins. Alien, Scarface and even the currently-playing World War Z all get hilariously sent up in this sequel, to great effect.