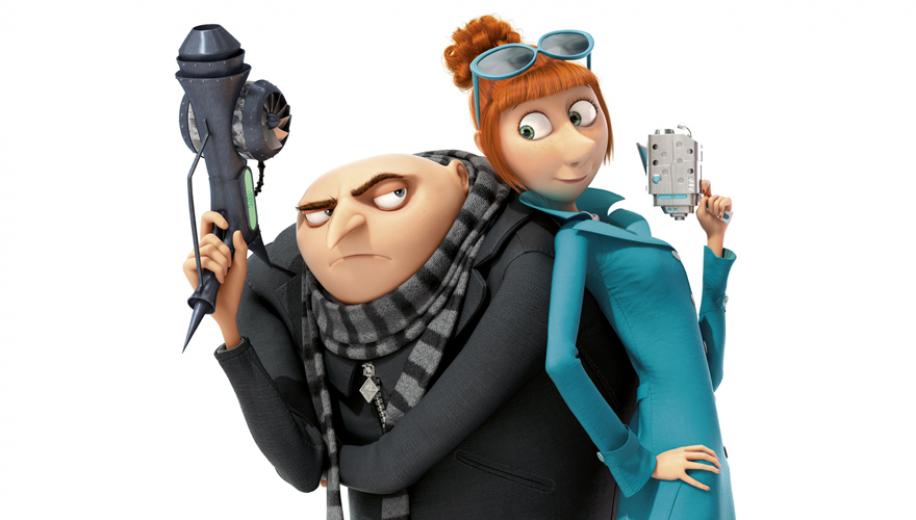 Despicable Me 2 cements the unstoppable popularity of Gru, his kids and his Minions.

Cleverly developing the interaction between once super-villain Gru and his adopted girls without having to resort to the standard sequel fall-back (have them split up and then get back together), Despicable Me 2 succeeds in creating a fairly decent villain, whose nefarious plans seep into the narrative slowly at first, but excels in what it does with the Minions – and the ultimate payoff is both hilarious and satisfying. It's a strong sequel.
With plenty of nice horror references, and nods to alien abductions, the best moments include a World War Z tsunami and a brilliant Alien reference, as well as some Scarface nods – although it’s a shame that Pacino dropped out of his role in the film, as that would have made them far more effective. Still, the presence of Kristen Wiig makes up for that somewhat, playing well opposite Steve Carell’s consistently entertaining Gru and dominating the piece. Despicable Me 2 and it's predecessor were always reference discs on Blu-ray, and so it's unsurprising that, just in time for the release of the third movie at the end of the month, we're getting to see what they look like on Ultra HD Blu-ray. It may well be limited by a 2K Digital Intermediate (DI), resulting in a 4K upscale, but this Ultra HD Blu-ray disc boasts a 2160p presentation, framed in the movie's original theatrical aspect ratio of 1.85:1 widescreen. The disc uses 10-bit video depth, a Wider Colour Gamut (WCG) and High Dynamic Range (HDR), and is encoded using the HEVC (H.265) codec.

We reviewed the UK Ultra HD Blu-ray release of Despicable Me 2 on a Samsung UE55KS8000 Ultra HD TV and a Samsung UBD-K8500 Ultra HD Blu-ray player, which we used to evaluate the disc's HDR10 base layer. This is the first UHD Blu-ray to include Dolby Vision, which means those with a suitably equipped player and TV can enjoy HDR with addition of dynamic metadata. We will be evaluating this aspect of the release using an updated Oppo UDP-203 and an LG OLED55B7V very soon and will update this review accordingly. Vision.

If the first movie looked fantastic on Blu-ray, demo and reference material through and through, then it's hard to remark on the second movie looking even better, but it did on Blu-ray, and it does here on Ultra HD Blu-ray, often with even more vibrant tones and striking images - the purple evil Minions; the luchador-inspired villain's costume; the various 'rays' that they blast across the screen. Right from the opening birthday party sequence through to the epic finale, it's a vivid, colour-popping affair which, like much of the first movie, made for exceptional 3D material but retains a striking amount of depth and pop in 2D largely thanks to the HDR and WCG elements of Ultra HD Blu-ray. Despicable Me 2 comes complete with an immersive DTS: X audio track centered on a fabulous DTS-HD Master Audio 7.1 core, which is stunning in and of itself, remaining largely demo and reference quality even before taking into account the enhancement offered by DTS: X. Dialogue is given clear and coherent distinction across the front and centre channels, but it's the effects and score that remain high points on this release. As with the first film, effects are wondrously inventive, from the various gadgets and crazy weapons to the underwater antics, and sitting-atop-a-missile sequence. The evil Minions sweep up across the soundstage and threaten to overwhelm your very living room. Surround action is tremendous, with great directionality and discrete sound design. Pharrell returns to score second time round - complete with the massively popular song Happy - and the track remains pure excellence, and that's even before you look at the enhanced DTS: X aspect.


Another cracking soundtrack that has been remixed for DTS:X immersive audio It's a decent enough package, if a little light

As with the first release, the Ultra HD Blu-ray release of Despicable Me 2 doesn't port over all of the extras from the 2D Blu-ray disc, but instead mirrors the 3D Blu-ray disc, retaining the all-important mini-movies, whilst you'll have to switch to the accompanying Blu-ray in the package to get all of the old extras - a slew of Featurettes and Deleted Scenes. It's a decent enough package, a little light, but mirroring the Blu-ray release. It's a strong sequel

On the eve of the release of the third movie in the series (notwithstanding the spin-off, Minions), Despicable Me 2 gets a re-release on a glorious Ultra HD Blu-ray disc that not only includes a new DTS:X mix but is also the first to support Dolby Vision. Already a reference title, the film somehow - almost unbelievably - manages look even before on Ultra HD Blu-ray, and fans will want to check out this new release.