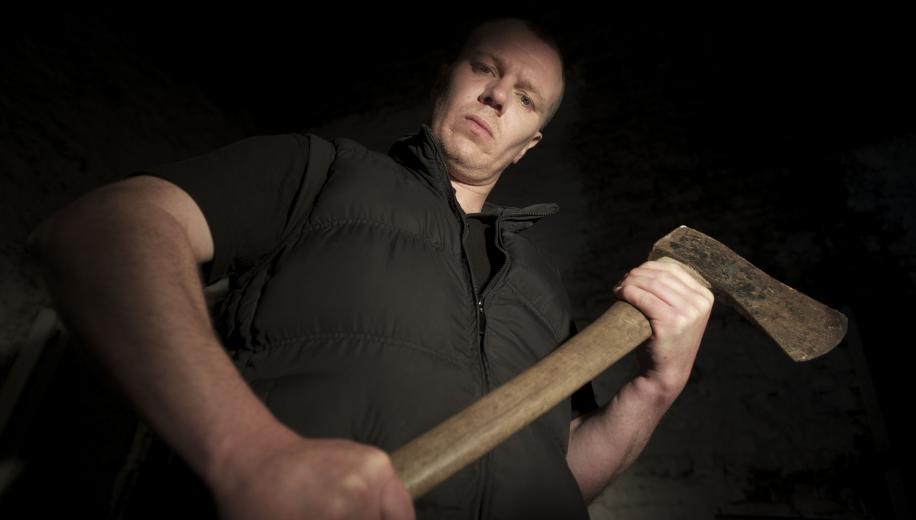 Desperate Measures comes to UK Region 2 DVD complete with a decent enough anamorphic video transfer, presented in the movie’s original aspect ratio of 1.78:1 widescreen. Despite the inherent limitations of SD-DVD, this production – which appears to be largely digitally shot – looks remarkably good, with no obvious print defects or damage, no overt DNR and little obtrusive edge enhancement. Sure enough, the detail level fluctuates – some scenes look excellent, whilst others lapse into a more blurry state – but that could easily be as much a result of its low budget origins as on the transfer here. For a DVD, certainly there are some nice moments, and both skin texture and fine object detail are commendable. The colour scheme is also remarkably broad, mainly making the most of the beautiful landscape settings – the lush, vibrant, vivid greens making for the absolute highlight; with reasonably accurate skin tones (occasionally a little on the pinkish side) and solid rich browns for the wood-and-stone-based house. Black levels are also quite strong, allowing for deep shadowing. Overall it looks pretty good – of course it’s absolutely nothing when compared to most Blu-rays, but it’s a lot better looking than many of my back catalogue SD-DVDs.

On the aural front the Dolby Digital 2.0 track also fares remarkably well, certainly sufficing for this kind of material. Dialogue-driven, the script comes across clearly and coherently throughout – from shouts and screams, and frequent f-bombs, to the quieter reflective moments. Obviously everything is front-dominant, and this leaves the effects distinctly limited – but, then again, the material and restricted setting does not really cater for anything in the least bit bombastic; and, surprisingly enough, the score comes across remarkably well and really assists the production at several key moments. For this film, despite the technical limitations of the track, there’s really not a great deal to complain about here.

The Making of Desperate Measures is 9 minutes long and has the filmmakers – predominantly the director and the writer – talking about the script, the story, the characters and how they put it all together. The writer talks about his inspiration (which relates to my first paragraph about desperate measures to detox somebody), and how they attempted to make the project more cinematic by utilising an unusual setting; and the two of them discuss the shoot, with brief behind the scenes footage going off in the background, interspersed with quite a few moments from the final film.

Creating the Score spends another 9 minutes with the composer Phillip Curran, who discusses how he put together the score, discussing what was required for the material, and what suited each individual scene, as well as showing us some of the pieces of music being composed (then directly compared to the use in the final cut). It’s quite interesting to hear from this young guy, and his thoughts on film scoring, particularly since, whilst his score was not exceptional, it certainly enhanced the drama.

Rounding off the disc we get a trailer for the main feature as well as a series of trailers for similar films, including – Day Zero, Freeway Killer, Risen, Abandoned, Massacre at My Lai Four, Savage, Circle, and Evilution.

Don’t be put off by the front cover, this isn’t another unnecessary low budget addition to the whole torture porn genre, it’s actually more of a psychological drama – even if it is still very low budget. With a small, often claustrophobic setting, the story could almost be made into a stage-play, and you might wonder why they don’t just show this feature as part of a Channel Four run of ‘new British independent drama’; but if that’s your sort of thing, then you might find something quite intriguing here. On Region 2 UK DVD we get surprisingly acceptable video and audio quality – not comparable to HD, but still pretty good for SD-DVD – and a few nice extras to round off a disc that fans will want to add to their collection. Newcomers who are interested in it may be able to pick it up quite cheap, otherwise you wouldn’t be too disappointed if you just ended up catching this late one night on TV.